Comments (0)
Add to wishlistDelete from wishlist
Cite this document
Summary
The study "Decision Making in a Nuclear Reactor Emergency" investigates the Chernobyl and Three Miles Island disasters that have revealed the loopholes in the management and designs of nuclear reactors. It is unimaginable that the Chernobyl nuclear power plant was defective in design and moreover the staff were not trained adequately…
Download full paperFile format: .doc, available for editing
HIDE THIS PAPERGRAB THE BEST PAPER98.7% of users find it useful 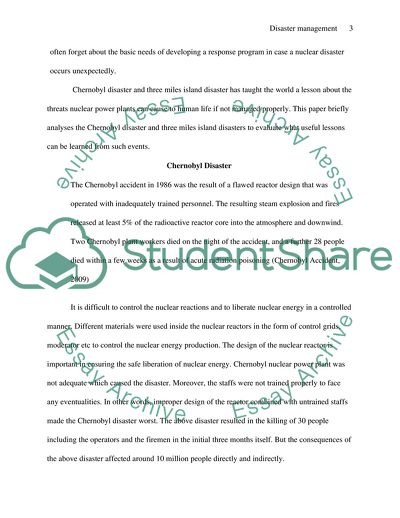 Extract of sample "Decision Making in a Nuclear Reactor Emergency"

Download file to see previous pages “Man-made disasters are events which, either intentionally or by accident cause severe threats to public health and well-being”. Even though, proper precautionary measures taken, it is quite possible that due to unforeseen reasons, disasters can occur.

Most of the manmade disasters are related to nuclear power. The energy crisis is a severe problem most of the countries are facing at present and in order to solve such problems many countries are trying to develop nuclear power. For example, Iran is currently trying to acquire nuclear power for its energy needs even though many other countries have doubts about Iran’s intentions. Nuclear energy has many advantages over other conventional energy sources like fossil fuels. At the same time, it has a lot of potential dangers also. The most threatening problem associated with nuclear energy is that if some problem occurs it is difficult to control the outward energy flow from the nuclear reactor. A comprehensive disaster management program is necessary for the prevention and management of nuclear disasters. The thirst for solving the energy crisis may force the countries to acquire nuclear energy technologies at any cost and they may often forget about the basic needs of developing a response program in case a nuclear disaster occurs unexpectedly.

Let us find you another Case Study on topic Decision Making in a Nuclear Reactor Emergency for FREE!