Comments (0)
Add to wishlistDelete from wishlist
Cite this document
Summary
This paper "Cultural Interpretations of Nature and the Effect on the Environment" discusses the word of nature that creates a sentimental feeling when spoken aloud. The word is used in advertising to create a sense of authenticity to products…
Download full paperFile format: .doc, available for editing
HIDE THIS PAPERGRAB THE BEST PAPER98.9% of users find it useful 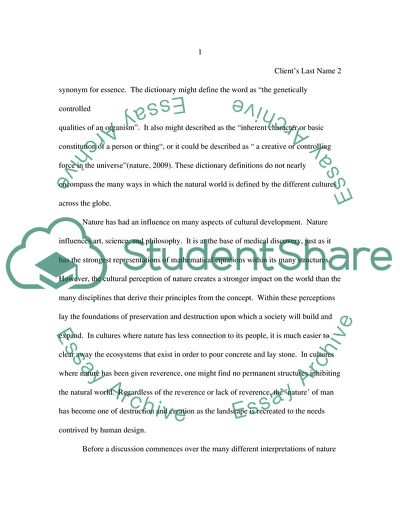 Download file to see previous pages In the same way that individuals have different views on the concept of nature, so do different cultures as a whole approach the concept. Perceptions of what can be termed the ’natural world’ differ between cultures, creating a change in how environmental concerns are considered and in how the ecology of the world is handled.

Let us find you another Essay on topic Cultural Interpretations of Nature and the Effect on the Environment for FREE!