Comments (0)
Add to wishlistDelete from wishlist
Cite this document
Summary
Drinking water continues to be one of the top priorities in the world. In the UK for instance, based on the European standards, the latest figures on water quality are the following: around 99.96% in England and Wales, 99.83% in Scotland, and 99.81% in Northern Ireland (Water UK, 2012). …
Download full paperFile format: .doc, available for editing
HIDE THIS PAPERGRAB THE BEST PAPER93.6% of users find it useful 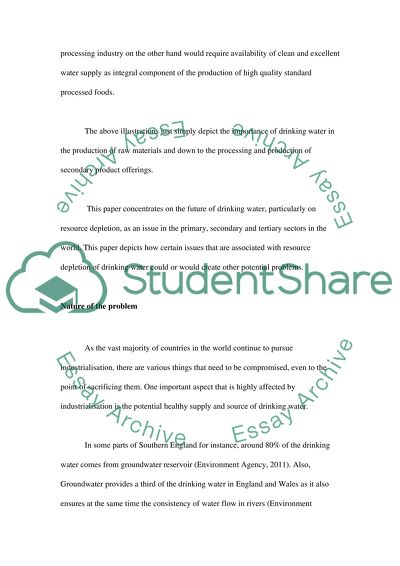 Extract of sample "The Future of Drinking Water"

Download file to see previous pages The primary sector comprises the primary production of raw materials or food, while the secondary sector concerns on the processing or refining of the produced goods or raw materials. As to the distribution of the finished products, the whole concern of it lies on the tertiary sector. However, all of these sectors require the availability or abundance of quality drinking water for them to function smoothly as possible.
For instance, a quality and abundant drinking water source is necessary to ensure the sustainability of the basic needs in life, and consistency in the achievement of human health, and other related human needs. Furthermore, the availability of quality drinking water is necessary in order to successfully produce food or raw materials for the production of other products in the secondary sector. For example, a quality drinking water is necessary in the livestock industry so that there will be quality produced products that can be readily used in the processing industry. The processing industry on the other hand would require availability of clean and excellent water supply as integral component of the production of high quality standard processed foods.
The above illustrations just simply depict the importance of drinking water in the production of raw materials and down to the processing and production of secondary product offerings.
...Download file to see next pagesRead More
Share:
Tags
Cite this document
(“The Future of Drinking Water Essay Example | Topics and Well Written Essays - 1500 words - 1”, n.d.)
Retrieved from https://studentshare.org/environmental-studies/1443848-drinking-water

CHECK THESE SAMPLES OF The Future of Drinking Water

Overcrowding: A Reality of Cairos Past and Future

Crowding is not just a problem that concerns space; it also applies pressure of resources, space, and opportunity. Cairo’s efforts to manage its population is mirrored by a continental program in Africa that aims to decentralize commerce and industries by 2015 (Raychaudhuri 6). In 2005, the Egypt Human Development Report (EHDR) 2005 was published and tackled the problems that overcrowding has brought to the city: it cites that the disparity in resources, prospects and representation is a direct deterrent to the national goal of development for Egypt (United Nations Development Programme [UNDP] “Choosing our future: Towards a New Social Contract”, 5-6)

Crowding in urban areas is a problem that all major...
10 Pages(2500 words)Term Paper

The Quality Of Water in Our Ecological System

The first article is titled ‘Water quality report targets phosphorus’ and it has been written by Susan Milton for the Cape Cod Times. It is a recent article since it first appeared in the month of August 2007 and there are several implied messages in the article itself. The first one which comes across directly within the title is the idea that phosphorus can hurt the quality of water in a region and the writer is quick to note that, “If you want an easy way to help the environment, use a phosphorus-free dishwashing detergent (Milton, 2007, Pg. 1)”.

It is indeed quite successful in passing on this message because the readers are given results of a scientific study which shows that chemicals such...
6 Pages(1500 words)Term Paper

There is a need, however, to prove or disprove Freud’s contention against religion because to perpetuate that ‘illusion’ blindly without ascertaining its truth or falsity is living in hope under a lie. Fortunately, psychologists and historians, contemporary to and subsequent to Freud, had offered proofs and arguments against Freud’s sweeping generalization of religion pointing to its unsoundness and perhaps, falsity.
In his book The Future of an Illusion, Sigmund Freud referred to religion as an illusion. Illusion, according to him, is fundamentally underpinned by human wishes as opposed to an error being essentially a consequence of mistake (213). Religion is an illusion because it is founded upon the...
7 Pages(1750 words)Book Report/Review

...Impacts of Regeneration Effort and Future Challenges and Prospect in Manchester UK Background Manchester is one of the first industrial cities in theworld dating back to the Roman period (DIxon and Otsuka 2010, p.58). The City has had faced a number of challenges in the past before becoming a provincial city and its subsequent growth during 1750-1850. It is reported that Manchester became a global center of the cotton trade in the early 19th century from which it was aliased ‘Connopolis (Allmendingerand White 2003, p.954). The growth of Manchester during the 19th century was mainly based on the manufacturing sectors that were communing up due to the emergence of industrialization. Additionally, the growth was reverberated by warehousing...
6 Pages(1500 words)Term Paper
sponsored ads
Save Your Time for More Important Things
Let us write or edit the essay on your topic "The Future of Drinking Water" with a personal 20% discount.
GRAB THE BEST PAPER

Let us find you another Essay on topic The Future of Drinking Water for FREE!