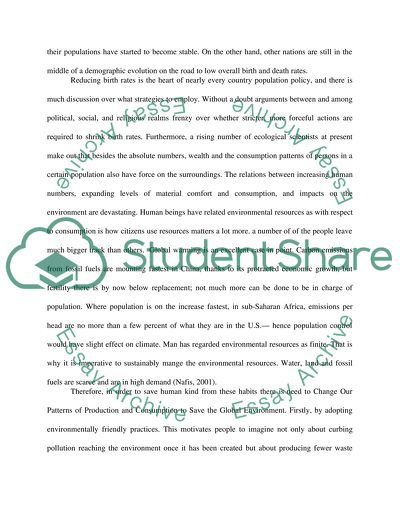 Extract of sample "Innovation and Sustainability"

Download file to see previous pages We are currently the principal species on the earth in all respects. And the environmental effects of our supremacy, as depicted by our overwhelming consumption and technological progress, can be seen in each and every corner of the human race. Such transformation in population and their shock necessitate cautious research so that scientists can comprehend and suggest thoughts for resource management (Turk & Bensel 2011). To be able to follow population trends in due course, scholars proposed the field of demography. Demographers’ focal point is on a few key variables namely— birth rates, death rates, and fertility rates—to find out and forecast how a populace changes over a point in time. Demographers have recognized the chief cause of the exponential growth in human popu­lation of the ancient times as discrepancy between death rates and birth rates. All the way through nearly all of human history, both birth and death rates were high, but more or less constant, and hence the population was kept the same as well. Developments in science, medicine, sani­tation, and nutrition over the last tens of two hundred years contributed to increasing the life expectancies and consequently a decline in mortality rates. Since birth rates did not instantaneously drop, as fatality rates declined, the overall human population increased. in the present day, birth rates in various nations have gone down to levels close to fatality rates, and their populations have started to become stable. On the other hand, other nations are still in the middle of a demographic evolution on the road to low overall birth and death rates. Reducing birth rates is the heart of nearly every country population policy, and there is much discussion over what strategies to employ. Without a doubt arguments between and among political, social, and reli­gious realms frenzy over whether stricter, more forceful actions are required to shrink birth rates. Furthermore, a rising number of ecological scientists at present make out that besides the absolute numbers, wealth and the consumption patterns of persons in a certain population also have force on the surroundings. The relations between increasing human numbers, expanding levels of material comfort and consumption, and impacts on the environment are devastating. Human beings have related environmental resources as with respect to consumption is how citizens use resources matters a lot more. a number of of the people leave much bigger track than others. Global warming is an excellent case in point. Carbon emissions from fossil fuels are mounting fastest in China, thanks to its protracted economic growth, but fertility there is by now below replacement; not much more can be done to be in charge of popula­tion. Where population is on the increase fastest, in sub-Saharan Africa, emissions per head are no more than a few percent of what they are in the U.S.— hence population control would have slight effect on climate. Man has regarded environmental resources as finite. That is why it is imperative to sustainably mange the environmental resources. Water, land and fossil fuels are scarce and are in high demand (Nafis, 2001). Therefore, in order to save human kind from these habits there is need to Change Our Patterns of Production and Consumption to Save ...Download file to see next pagesRead More
Share:
Tags
Cite this document
(“Innovation and Sustainability Essay Example | Topics and Well Written Essays - 750 words”, n.d.)
Innovation and Sustainability Essay Example | Topics and Well Written Essays - 750 words. Retrieved from https://studentshare.org/environmental-studies/1442991-sci
(Innovation and Sustainability Essay Example | Topics and Well Written Essays - 750 Words)
Innovation and Sustainability Essay Example | Topics and Well Written Essays - 750 Words. https://studentshare.org/environmental-studies/1442991-sci.
“Innovation and Sustainability Essay Example | Topics and Well Written Essays - 750 Words”, n.d. https://studentshare.org/environmental-studies/1442991-sci.
Comments (0)
Click to create a comment or rate a document

CHECK THESE SAMPLES OF Innovation and Sustainability

Over the past few years, due to the unpredictable supply of cotton all over the world, developers have come to create synthetic materials used in clothing and other garments. The innovation of new fabric materials must continue. It could serve as the answer to the problems that garment manufacturers are facing.
Globalization has caused a lot of stress to most of the textile companies that are located in Leicestershire, United Kingdom. The increasing number of global competitors has caused a lot of damage to the local players within the Leicestershire textile industry. In the past few years, many of these local businesses either declared closure. Others were forced to realign the business by relocating the company to a foreign...
15 Pages(3750 words)Case Study

People pursue good health and will do anything new that will help them to live a better life. Corporates too do the same by pursuing strategies of improvements and breakthroughs that create new products and new markets. This is a continuous exercise and any letup, in health or corporate endeavors will invite a decline. This then is the engine that persuaded the corporates to innovate.

The sustainability barriers, best practices, drivers and issues are identified and discussed with the aim of developing a suitable sustainability plan for the new venture for the next 40 years i.e. 2050. The automobile sector is chosen because this sector is a highly dynamic sector which has a high sustainability requirement. Also, sustainability in this industry is given much importance especially because of the high negative impacts that the automobile companies have had on the environmental aspects. Also, the global automobile industry is a huge and complex industry that is affected by many social, economic, political, technological and environmental factors. Thus, this project is aimed at identifying the drivers, opportunities...
9 Pages(2250 words)Assignment

The paper...
9 Pages(2250 words)Research Proposal
sponsored ads
Save Your Time for More Important Things
Let us write or edit the essay on your topic "Innovation and Sustainability" with a personal 20% discount.
GRAB THE BEST PAPER

Let us find you another Essay on topic Innovation and Sustainability for FREE!