Self Esteem, Self Confidence and Self Motivation with Respect to Goals and Objectives - Essay Example

Comments (0)
Add to wishlistDelete from wishlist
Cite this document
Summary
It is of immense importance for a person to be able to develop all these characteristics well within him. They are usually inherent and require some amount of potential to tap and exploit within an individual. …
Download full paperFile format: .doc, available for editing
HIDE THIS PAPERGRAB THE BEST PAPER91% of users find it useful 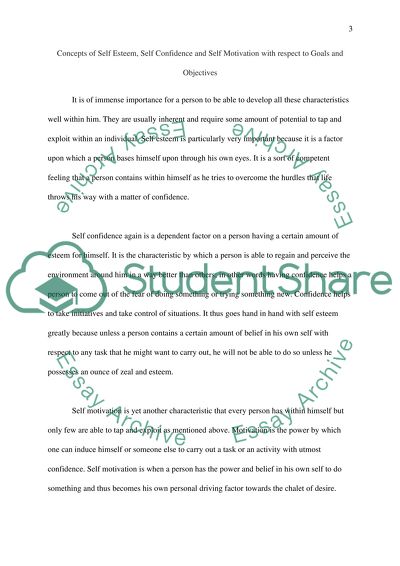 Extract of sample "Self Esteem, Self Confidence and Self Motivation with Respect to Goals and Objectives"

Download file to see previous pages It is a sort of competent feeling that a person contains within himself as he tries to overcome the hurdles that life throws his way with a matter of confidence.

Self confidence again is a dependent factor on a person having a certain amount of esteem for himself. It is the characteristic by which a person is able to regain and perceive the environment around him in a way better than others; in other words having confidence helps a person to come out of the fear of doing something or trying something new. Confidence helps to take initiatives and take control of situations. It thus goes hand in hand with self esteem greatly because unless a person contains a certain amount of belief in his own self with respect to any task that he might want to carry out, he will not be able to do so unless he possesses an ounce of zeal and esteem.

Self motivation is yet another characteristic that every person has within himself but only few are able to tap and exploit as mentioned above. Motivation is the power by which one can induce himself or someone else to carry out a task or an activity with utmost confidence. Self motivation is when a person has the power and belief in his own self to do something and thus becomes his own personal driving factor towards the chalet of desire.
In order to understand the same, one can easily witness how self esteem and self confidence are again required in order for a person to be motivated by his own self. If one does not possess enough courage or confidence, he will not be able to motivate himself in the long run. All these qualities take some time for people to tap into and bring out. They all require certain factors from the outside environment of a human being as well in order to be touched upon. For example, self esteem is an aspect that rises and increases every time a person is praised by others for doing a certain something. People usually tend to think higher of them once others begin to respect them, listen to them and take their advice. When people get attention and achieve success in copious amounts, their levels of self esteem automatically increase. (Dubrin, A) Much the same way, in the same process, a person also tends to increase his personal amounts of confidence once others begin to praise or compliment him on something. For example, taking any business enterprise into account, an entrepreneur would only be able to increase his sales and take his venture to a higher level if he was praised from the outside world. Only when he receives adulation from society will he become aware of whatever he is worth. One must try and tap this confidence and esteem on his own self, however, too much of the same, on the lines of an overdose can become a problem as people usually think that they are too good for anybody else and thus end up hurting and harming the environment around them. This usually leads to them losing out on their friends and family and they turn out to be aggressive and far too overconfident. Thus, these qualities must be tapped in proper balanced ...Download file to see next pagesRead More
Share:
Tags
Cite this document
(“Self Esteem, Self Confidence and Self Motivation with Respect to Goals Essay”, n.d.)
Retrieved de https://studentshare.org/environmental-studies/1422555-self-esteem-self-confidence-and-self-motivation-with-respect-to-goals-and-objectives

(Self Esteem, Self Confidence and Self Motivation With Respect to Goals Essay)
https://studentshare.org/environmental-studies/1422555-self-esteem-self-confidence-and-self-motivation-with-respect-to-goals-and-objectives.

“Self Esteem, Self Confidence and Self Motivation With Respect to Goals Essay”, n.d. https://studentshare.org/environmental-studies/1422555-self-esteem-self-confidence-and-self-motivation-with-respect-to-goals-and-objectives.
Comments (0)
Click to create a comment or rate a document

CHECK THESE SAMPLES OF Self Esteem, Self Confidence and Self Motivation with Respect to Goals and Objectives

...Please indicate Self Assessment: Conflict Management Style The assessment on conflict management that I took suggests that I am the type of person who tends to cooperate and work with people to achieve a desirable outcome. It suggests that when I am faced with a conflicting situation, although I listen and consider other viewpoints included in the discussion, I carefully evaluate and analyse every detail in accordance to my own. It depicts that I welcome other ideas or arguments but not easily swayed by them for I tend to make my point be heard and accepted as well, creating a really interesting discussion that in turn promotes a win-win situation. Furthermore, the assessment also indicated that second to collaborating attitude, I also...
7 Pages(1750 words)Essay
sponsored ads
Save Your Time for More Important Things
Let us write or edit the essay on your topic "Self Esteem, Self Confidence and Self Motivation with Respect to Goals and Objectives" with a personal 20% discount.
GRAB THE BEST PAPER

Let us find you another Essay on topic Self Esteem, Self Confidence and Self Motivation with Respect to Goals and Objectives for FREE!