Comments (0)
Add to wishlistDelete from wishlist
Cite this document
Summary
TORT LAW Author Institute 1. The issue in this question requires an analysis of Occupiers Liability Act 1957 and 1984. The Acts have not defined what an occupier means, the only decisive element is that there must be control of the premises…
Download full paperFile format: .doc, available for editing
HIDE THIS PAPERGRAB THE BEST PAPER98.9% of users find it useful 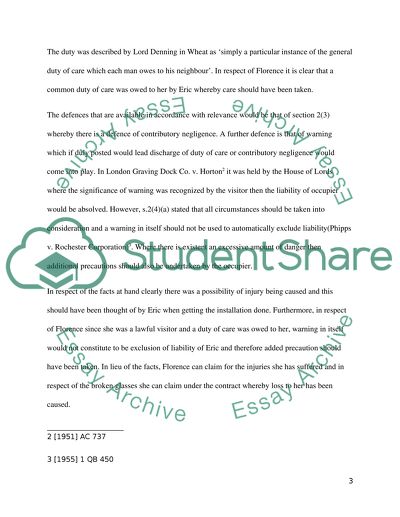 Download file to see previous pages The status of the entrant is quite easily that of a lawful visitor where it is due to an express provision. It has been held by Scrutton LG that ‘when you invite a person into your house to use the stairs, you do not invite him to slide down the banisters’. In respect of Florence the situation is quite clear as she was a lawful visitor and the warning clearly did not restrict access to the place. In respect of the common duty of care section 2 of the OLA 1957 provides that ‘an occupier of premises owes the same duty, the common duty of care to all his visitors except in so far as he is free to and does extend, restrict, modify, or exclude his duty to any visitor or visitor by agreement or otherwise’ and ‘the common duty of care is a duty to take such care in all circumstance of the care is reasonable to see that the visitor will be reasonably safe in using the premises for the purposes for which he is invite or permitted by the occupier to be there’. The duty was described by Lord Denning in Wheat as ‘simply a particular instance of the general duty of care which each man owes to his neighbour’. In respect of Florence it is clear that a common duty of care was owed to her by Eric whereby care should have been taken. The defences that are available in accordance with relevance would be that of section 2(3) whereby there is a defence of contributory negligence. A further defence is that of warning which if duly posted would lead discharge of duty of care or contributory negligence would come into play. In London Graving Dock Co. v. Horton2 it was held by the House of Lords where the significance of warning was recognized by the visitor then the liability of occupier would be absolved. However, s.2(4)(a) stated that all circumstances should be taken into consideration and a warning in itself should not be used to automatically exclude liability(Phipps v. Rochester Corporation)3. Where there is existent an excessive amount of danger then additional precautions should also be undertaken by the occupier. In respect of the facts at hand clearly there was a possibility of injury being caused and this should have been thought of by Eric when getting the installation done. Furthermore, in respect of Florence since she was a lawful visitor and a duty of care was owed to her, warning in itself would not constitute to be exclusion of liability of Eric and therefore added precaution should have been taken. In lieu of the facts, Florence can claim for the injuries she has suffered and in respect of the broken glasses she can claim under the contract whereby loss to her has been caused. The only element whereby it can be argued is the fact that Coolit were hired as independent contractors by Eric, however, in that respect all necessary steps should have been undertaken by Eric so as to avoid any harm being caused to anyone, In respect of George a discussion on Occupiers Liability Act 1984 needs to be made. The Act deals with people who enter a trespasser. A duty would fall on the Occupier if three requirements as laid down under s.1(3) of the Act are satisfied. Firstly there must be awareness of danger by the occupier or reasonable ground to believe of its existence. Second, knowledge or reasonable grounds to believe that entrant is within vicinity of the danger or that he may enter into vicinity, finally, ‘the risk is one against which in all the circumstances ...Download file to see next pagesRead More
Share:
Tags
Cite this document
(“TORT LAW Essay Example | Topics and Well Written Essays - 2500 words”, n.d.)
Retrieved from https://studentshare.org/environmental-studies/1421824-tort-law
(TORT LAW Essay Example | Topics and Well Written Essays - 2500 Words)
https://studentshare.org/environmental-studies/1421824-tort-law.
“TORT LAW Essay Example | Topics and Well Written Essays - 2500 Words”, n.d. https://studentshare.org/environmental-studies/1421824-tort-law.
Comments (0)
Click to create a comment or rate a document

CHECK THESE SAMPLES OF TORT LAW

New and complex issues have arisen which demanded fresh understanding and handling of cases involved them. This has resulted in the enhanced development of specialized laws e.g. cyber laws and interpretation of those laws. The same is true with Media Laws. Media has developed much in the last half-century. As it evolved as a profession and more people started to join it, there arose the levels of money involved in it. With this grew the contractual obligations on the parts of parties and concerned laws e.g. patent laws, privacy laws, and copyrights laws, etc. also started to play their parts. With these issues, the role of law in the media industry also reached a new height.
Mathew Fisher, the appellant, joined a band with Mr...
6 Pages(1500 words)Assignment
sponsored ads
Save Your Time for More Important Things
Let us write or edit the essay on your topic "TORT LAW" with a personal 20% discount.
GRAB THE BEST PAPER

Let us find you another Essay on topic TORT LAW for FREE!