Comments (0)
Add to wishlistDelete from wishlist
Cite this document
Summary
(Name of of Professor) The Making of the Self Exploring the Factors Influencing Human Behavior The peculiar unfathomable desire of human beings to know more about themselves, their nature and origin, is very much reflected by the production of numerous researches and studies throughout the history…
Download full paperFile format: .doc, available for editing
HIDE THIS PAPERGRAB THE BEST PAPER95.1% of users find it useful 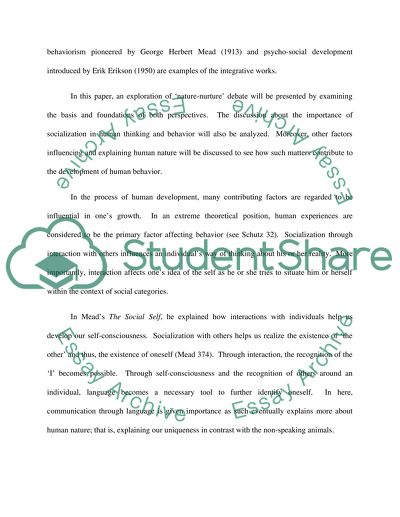 Download file to see previous pages The ‘nature versus nurture’ debate for instance is one of the binaries that offer certain perspectives explaining human attitudes and behavior. Socialization as one of the factors influencing human behavior (Berger and Luckmann 42-50) was primarily introduced by sociologists to emphasize the role of the environment and society in the formation of their self-concept and identity. In the field of psychology, behaviorism on the basis of human instincts and stimulus-response was considered to be one of the major theories that explain human nature. In analysis, in contrast with psychological theories, sociological explanations of human behavior are leaning toward the ‘nurture’ side of the debate; thus, placing psychology on the ‘nature’ side. However, through further studies and exploration of the subject, integrative theories about human behavior are also introduced. Social behaviorism pioneered by George Herbert Mead (1913) and psycho-social development introduced by Erik Erikson (1950) are examples of the integrative works. In this paper, an exploration of ‘nature-nurture’ debate will be presented by examining the basis and foundations of both perspectives. The discussion about the importance of socialization in human thinking and behavior will also be analyzed. Moreover, other factors influencing and explaining human nature will be discussed to see how such matters contribute to the development of human behavior. In the process of human development, many contributing factors are regarded to be influential in one’s growth. In an extreme theoretical position, human experiences are considered to be the primary factor affecting behavior (see Schutz 32). Socialization through interaction with others influences an individual’s way of thinking about his or her reality. More importantly, interaction affects one’s idea of the self as he or she tries to situate him or herself within the context of social categories. In Mead’s The Social Self, he explained how interactions with individuals help us develop our self-consciousness. Socialization with others helps us realize the existence of ‘the other’ and thus, the existence of oneself (Mead 374). Through interaction, the recognition of the ‘I’ becomes possible. Through self-consciousness and the recognition of others around an individual, language becomes a necessary tool to further identify oneself. In here, communication through language is given importance as such eventually explains more about human nature; that is, explaining our uniqueness in contrast with the non-speaking animals. In Mead’s theory, the concept of ‘the social self’ (374-380) ultimately emphasizes the relation of the self to others in the social world. Though the theory is seemingly grounded on abstract concepts, Mead was able to explain his theory objectively with reference to behaviorism. Apparently, Mead’s mature social psychology offered an example of how ideas coming from opposing arenas can be integrated in a single work (see Cook 67). To further explain human behavior, we can also observe how scholars attributes it to human ‘instincts’ and the biological and psychological state of a person. In this perspective, ‘nature’ was considered to be the primary cause of human behavior. In the field of psychology, most established theories are based on this assumption reflecting the preferred ‘objective’ ...Download file to see next pagesRead More
Share:
Tags
Cite this document
(“Discuss nature vs. nurture Essay Example | Topics and Well Written Essays - 1000 words”, n.d.)
Retrieved from https://studentshare.org/environmental-studies/1417593-discuss-nature-vs-nurture
(Discuss Nature Vs. Nurture Essay Example | Topics and Well Written Essays - 1000 Words)
https://studentshare.org/environmental-studies/1417593-discuss-nature-vs-nurture.
“Discuss Nature Vs. Nurture Essay Example | Topics and Well Written Essays - 1000 Words”, n.d. https://studentshare.org/environmental-studies/1417593-discuss-nature-vs-nurture.
Comments (0)
Click to create a comment or rate a document

CHECK THESE SAMPLES OF Discuss nature vs. nurture

6 Pages(1500 words)Coursework
sponsored ads
Save Your Time for More Important Things
Let us write or edit the essay on your topic "Discuss nature vs. nurture" with a personal 20% discount.
GRAB THE BEST PAPER

Let us find you another Essay on topic Discuss nature vs. nurture for FREE!