Comments (0)
Add to wishlist Delete from wishlist
Cite this document
Summary
Persuasion paints a portrait of the social issues and divisions of the class system. Many of the characterized middle class individuals are happier than the upper class individuals…
Download full paper File format: .doc, available for editing
HIDE THIS PAPERGRAB THE BEST PAPER97.2% of users find it useful 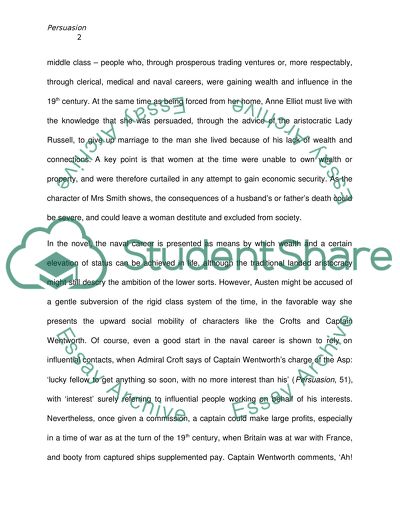 Download file to see previous pages The Elliots are a titled and landowning family, and so, in the conception of traditional, aristocratic society, they enjoyed a secure position. However, Austen highlights in Persuasion just how unstable this position was becoming by the 19th century, and the very real risks which could threaten the fundamental happiness of gentry women. Sir Walter, obsessed with his position as a baronet, overspends in order to maintain what he regards the traditional lifestyle of his class, and brings huge debts upon the family. This forces his daughters to move out of their childhood home – Kellynch Hall – and see strangers move in, who are members of the upwardly mobile middle class – people who, through prosperous trading ventures or, more respectably, through clerical, medical and naval careers, were gaining wealth and influence in the 19th century. At the same time as being forced from her home, Anne Elliot must live with the knowledge that she was persuaded, through the advice of the aristocratic Lady Russell, to give up marriage to the man she lived because of his lack of wealth and connections. A key point is that women at the time were unable to own wealth or property, and were therefore curtailed in any attempt to gain economic security. As the character of Mrs Smith shows, the consequences of a husband’s or father’s death could be severe, and could leave a woman destitute and excluded from society. In the novel, the naval career is presented as means by which wealth and a certain elevation of status can be achieved in life, although the traditional landed aristocracy might still descry the ambition of the lower sorts. However, Austen might be accused of a gentle subversion of the rigid class system of the time, in the favorable way she presents the upward social mobility of characters like the Crofts and Captain Wentworth. Of course, even a good start in the naval career is shown to rely on influential contacts, when Admiral Croft says of Captain Wentworth’s charge of the Asp: ‘lucky fellow to get anything so soon, with no more interest than his’ (Persuasion, 51), with ‘interest’ surely referring to influential people working on behalf of his interests. Nevertheless, once given a commission, a captain could make large profits, especially in a time of war as at the turn of the 19th century, when Britain was at war with France, and booty from captured ships supplemented pay. Captain Wentworth comments, ‘Ah! Those were the pleasant days when I had the Laconia! How fast I made money in her’ (Persuasion, 52), while the Admiral even says ‘if he have the good luck to live to another war’ (Persuasion, 55), clearly eyeing potential profits. Austen seems to favor the navy as a career most after the clergy, and not only in Persuasion. She uses it in this novel, however, as the model by which people can be promoted and achieve success and prosperity on the basis of their personal merit, rather than their ancestry. Indeed, such a meritocratic system is anathema to Sir Walter, who is obsessed with heredity. This obsession with his status as a baronet reaches a comic level when we see him repeatedly reading and re-reading the entry on him in the Baronetage, no doubt the famous Debrett’s Peerage and Baronetage, first published in 1802 (Ross, 196). Sir Walter is convinced that this status gives him some natural superiority, and yet, on comparison ...Download file to see next pages Read More
Share:
Tags
Cite this document
(“Social Class and Class Conflict in Jane Austens Persuasion Essay”, n.d.)
Retrieved from https://studentshare.org/environmental-studies/1408370-social-class-and-class-conflict-in-jane-austens-persuasion

When we speak about business management, most people talk about the core business functions like strategies, products, training & development, management of various departments of the business like marketing, production, planning, etc. Social responsibilities and business ethics are the least communicated topics in the business community because of the least preference given to the non-productive sectors by organizations. Most of the greedy organizations spent millions on the research and development for improving their competitive power in the business world, but they often keep a blind eye towards their responsibility towards ensuring proper ethical standards in their business activities. Organizations that underestimate the...
6 Pages (1500 words) Coursework
sponsored ads
Save Your Time for More Important Things
Let us write or edit the essay on your topic "Social Class and Class Conflict in Jane Austens Persuasion" with a personal 20% discount.
GRAB THE BEST PAPER

Let us find you another Essay on topic Social Class and Class Conflict in Jane Austens Persuasion for FREE!