Comments (0)
Add to wishlist Delete from wishlist
Cite this document
Summary
Among the stories of Kipling "The Man Who Would Be King" offers an important incite and comparison into ambitions if individuals in the British Empire thus considered an imperial allegory. The dreams of the two men of ruling the foreign land become a reality. Both Carnehan and…
Download full paper File format: .doc, available for editing
HIDE THIS PAPERGRAB THE BEST PAPER98.5% of users find it useful 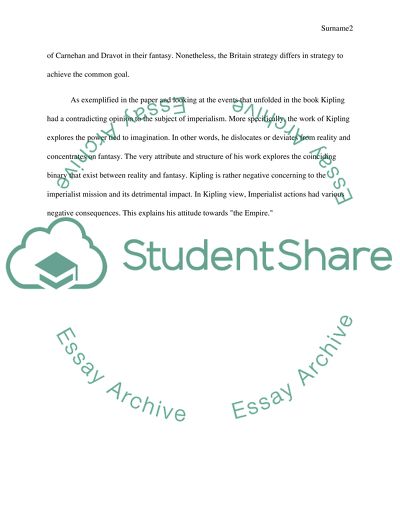 British imperialism and Kipling Among the stories of Kipling "The Man Who Would Be King" offers an important incite and comparison into ambitions if individuals in the British Empire thus considered an imperial allegory. The dreams of the two men of ruling the foreign land become a reality. Both Carnehan and Dravot succeeded and were kings. However, the outcome from the story the two men, is that Dravot and Carnehan, who tried to portray themselves up as “rulers”, realizes that their ambitions and fantasy are only proper as long as their subterfuge held up. For instance, when they are exposed the natives turn on them since they were as men as opposed to gods. Dravot being singled out as "neither God nor Devil but a man!" (p, 67). The result of their action was hostility from the natives.
In a similar way, the ambitions and fantasy of the British was similar to that of Peachy and Danny. Danny and Peachy through their ill ambitions, sets off for to a foreign land of Kafiristan, “where no white man has ever been since Alexander the Great” (p, 18), in pursuit of power and wealth. This explains various British Imperialist in many parts of the world such a in Africa and India where they acquired colonies. Similarly the tendencies of the British Imperialist ended as altruism surface faded under the need to conquer and exploit natives. This was the case of Carnehan and Dravot in their fantasy. Nonetheless, the Britain strategy differs in strategy to achieve the common goal.
As exemplified in the paper and looking at the events that unfolded in the book Kipling had a contradicting opinion to the subject of imperialism. More specifically, the work of Kipling explores the power tied to imagination. In other words, he dislocates or deviates from reality and concentrates on fantasy. The very attribute and structure of his work explores the coinciding binary that exist between reality and fantasy. Kipling is rather negative concerning to the imperialist mission and its detrimental impact. In Kipling view, Imperialist actions had various negative consequences. This explains his attitude towards "the Empire."
Work cited
Top of Form
Top of Form
Top of Form
Kipling, Rudyard. The Man Who Would Be King. New York: Barse & Hopkins, 1890. Print.
Bottom of Form
Bottom of Form
Bottom of Form
Top of Form
Bottom of Form Read More
Share:
Tags
Cite this document
(“British imperialism and Kipling Essay Example | Topics and Well Written Essays - 250 words”, n.d.)
Retrieved from https://studentshare.org/english/1698633-british-imperialism-and-kipling

CHECK THESE SAMPLES OF British imperialism and Kipling

... 18 March Was the British Empire Racialist or Racist? (Johnson’s (2003) British Imperialism Review and Discussion) British Imperialism by Johnson (2003) is one of the more basic but still comprehensive accounts of the making of British colonial empire and of different aspects of its relations with native population of the conquered lands. In Chapter 8 of this book the author deals with the problem of racism/racialism in the doctrine and practice of British policies with regard to the non-white colonial populations. The aim of this paper is to review the argument advanced by Johnson (2003) and to present my own conclusions about the subject in question. In the first section of this Chapter, Stereotyping the coloniser and colonised, Johnson...
4 Pages (1000 words) Essay

...? BRITISH IMPERIALIASM IN AFRICA Introduction Formation and rule of the British Empire is an interesting and most important aspect of world history that demonstrates influence of great power over various nations. During the nineteenth century, the British Empire was composed of various regions of the world, but it had control over small parts of Africa. The British rule had strongly influenced on important as well as developed regions across the globe ranging from Australia to Hong Kong, Canada, America, and India. Despite control over few regions of Africa, British imperialism had long lasting effects that contribute to bring change in various sectors of the African regions including social, economical, cultural, and political...
4 Pages (1000 words) Research Paper

A positive outcome is seen in one document entitled "Modern Progressive nations,” this file shows what larger nations gave to smaller colonies. The nations constructed roads, canals, and railways for them. Exposed telegraph and the newspaper to them, established educational facilities for them, shared with them the sanctification of their civilization, and generally made them economized. After this happened, they belonged to modern culture. Another affirmative effect is realized in document three known as "Colonial Governments and Missionaries.” It expresses the way in which the colonial governments presented improved medical precaution and better techniques of sanitation. Then new crops were introduced; tools and farming skil...
5 Pages (1250 words) Essay

Nationalism and imperialism in British africa 1850-1960

... labor. Settler societies were therefore quick to seek political autonomy in order to deal with the 'natives' in their own way and acquire what territory they wanted. Hence, the nineteenth century saw a further divergence between colonial and imperial ideology. Two contradictory sets of principles were on a collision course within the settlements: the concept of trusteeship within the imperial philosophy of a non-racial empire, and the settlers' determination to create a 'White Man's Country' (Huttenback 1976:21)3. After the 'scramble for Africa' in the 1880s, there was a brief age of self-conscious imperialism when the British empire was vaunted as the strongest, largest and most benign the world had ever seen, and flags and banners...
6 Pages (1500 words) Essay

...The rationale behind the British, French, German and Italy's imperial expansion into Africa is the of debate. Some political historians argue the rationale to be purely economic, while others insist that it was primarily political. The colonial powers themselves sought to explain their actions in ethical and moral terms. Within the context of this particular explanation, they were motivated by the imperatives of penetrating the darkness that was Africa through the extension of knowledge, education, religion and civilization (Roshwald, 1994). Needless to say, the aforementioned explanation has been largely dismissed as baseless and little more than a transparent attempt to legitimize the overt exploitation of an entire continent...
2 Pages (500 words) Essay

...Women's involvement in British imperialism has become a very popular topic for discussion and exploration by historians. Though the women did not have political rights and freedom at that point of time to influence the Empire's imperialist policies, yet they were able to influence them in an indirect way. In fact, some women became leading propagandists of the Empire. A name that comes across as an example for this category is that of Flora Shaw (first colonial Editor, Times, 1890-1900), who believed in white superiority and held a masculinist view of the empire. Consequently. This school of thought was much against the political freedom and equality for women. However, another band of feminists advocated for political equality, though...
9 Pages (2250 words) Essay

...Imperialism is a term in the public dis that invites a wealth of negative connotations, regardless of the context in which one uses the term. It invokes imagery of superpower conquest of vulnerable, primitive people, and the exploitation of natural resources to feed commercially hungry and greedy industrial nations. Aside from these value-laden, extravagant representations of abuse and mistreatment, the issue of imperialism deserves a dispassionate look into what it means (both in the past and in the present) for a state to be an imperial power: extending its political reign across cultural and social boundaries. Like many other terms in the popular lexicon, imperialism is one that finds its use in bolstering the emotional appeals...
5 Pages (1250 words) Essay

...Kim by Rudyard Kipling Rudyard Kipling’s Kim is a picturesque novel set during the British imperialism of India and addresses the open conflict between the British and Russian empires and its impact on the lives of the characters. The novel offers a portrayal of different people, cultures and religions that cohabit in the Indian society of the 19th century. However, Kipling’s book has a very abrupt and unusual ending that departs from the regular narration to introduce a form of revelation about the finding of the River of the Arrow. Even though the ending is not coherent and does not inform of Kim’s future move, it provides closure because the redemption at the end offers a solution to all the conflict the novel raises...
5 Pages (1250 words) Essay

... British Imperialism on India The ideological origins of the British India had a rather interesting source. Many British intellectuals of the time held the view that Indian people needed enlightenment and progress and the way to provide it would begin with colonization. Such eminent philosophers like John Stuart Mill voiced similar opinions. It was believed that, though Britain suffered substantial economic loss and political disadvantages in governing India progress and the general happiness of Indian people is facilitated under British rule than when they were governed by their native kings. Thus, if only the benefits which the Indians would gain from British rule were taken into account, it was desirable for the British to rule...
7 Pages (1750 words) Essay
sponsored ads
Save Your Time for More Important Things
Let us write or edit the essay on your topic "British imperialism and Kipling" with a personal 20% discount.
GRAB THE BEST PAPER

Let us find you another Essay on topic British imperialism and Kipling for FREE!