Comments (1)
Add to wishlistDelete from wishlist
Cite this document
Summary
The political opponent of President Obama in the 2013 general elections attempted to assassinate his popularity and discredit him from voters by using a raise in taxes political ad. The media went further to capture the effects of such high taxes to include the following; more…
Download full paperFile format: .doc, available for editing
HIDE THIS PAPERGRAB THE BEST PAPER96.5% of users find it useful 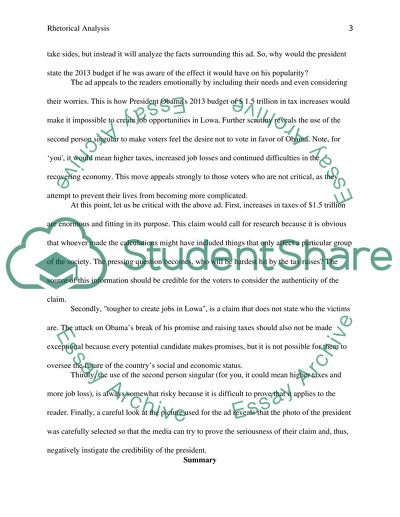 An Aristotelian Rhetorical Analysis of a Political ad. Introduction Source: http florahelix.dragoonsoftware.com/2012/09/critical-analysis-of-political-advertising/
The political opponent of President Obama in the 2013 general elections attempted to assassinate his popularity and discredit him from voters by using a raise in taxes political ad. The media went further to capture the effects of such high taxes to include the following; more job loss and continued difficulty for the recovering economy (Florahelix, 2012).
Rhetorical analysis
It is not difficult to miss out on such ads when the elections are fast approaching. Opponents push as hard as they possibly can by appealing to the voters and unethically discrediting whoever stands in the path of their goal. Therefore, since political ads are always one sided; which implies that whoever the media favors gets the right posts, the paper will not take sides, but instead it will analyze the facts surrounding this ad. So, why would the president state the 2013 budget if he was aware of the effect it would have on his popularity?
The ad appeals to the readers emotionally by including their needs and even considering their worries. This is how President Obamas 2013 budget of $ 1.5 trillion in tax increases would make it impossible to create job opportunities in Lowa. Further scrutiny reveals the use of the second person singular to make voters feel the desire not to vote in favor of Obama. Note, for ‘you, it would mean higher taxes, increased job losses and continued difficulties in the recovering economy. This move appeals strongly to those voters who are not critical, as they attempt to prevent their lives from becoming more complicated.
At this point, let us be critical with the above ad. First, increases in taxes of $1.5 trillion are enormous and fitting in its purpose. This claim would call for research because it is obvious that whoever made the calculations might have included things that only affect a particular group of the society. The pressing question becomes, who will be hardest hit by the tax raises? The source of this information should be credible for the voters to consider the authenticity of the claim.
Secondly, "tougher to create jobs in Lowa", is a claim that does not state who the victims are. The attack on Obama’s break of his promise and raising taxes should also not be made exceptional because every potential candidate makes promises, but it is not possible for them to oversee the future of the country’s social and economic status.
Thirdly, the use of the second person singular (for you, it could mean higher taxes and more job loss), is always somewhat risky because it is difficult to prove that it applies to the reader. Finally, a careful look at the picture used for the ad reveals that the photo of the president was carefully selected so that the media can try to prove the seriousness of their claim and, thus, negatively instigate the credibility of the president.
Summary
The sources of this ad are noted at the bottom right. They are the congressional budget office and the Fox news. The first source seems reasonable because it is just a public record. However, the use of the second one is completely impetuous and hilarious. It is widely known that Fox News is one of the least reliable news network present and, therefore, the rough estimate of the figure of a number of tax raises proves their poor research. This analysis only attempts to prove to voters about vote manipulation that takes place daily in mass media, and hence, it is vital to be vigilant when making decisions.
References
Florahelix. (2012, September 28). Critical Analysis of Political Advertising. Retrieved June 4, 2015, from Florahelix: http://florahelix.dragoonsoftware.com/2012/09/critical-analysis-of-political-advertising/ Read More
Share:
Tags
Cite this document
(“Aristotelian rhetorical analysis Essay Example | Topics and Well Written Essays - 500 words”, n.d.)
Retrieved from https://studentshare.org/english/1697072-aristotelian-rhetorical-analysis

io
ioreilly added comment 4 months ago
Student rated this paper as
I never thought 500 words essay could be written in such a free manner. I loved the background of this essay. Will definitely use it for my own work!

...?Rhetorical Analysis of the Obama Job Speech Editorial From Daily Press Mr. John Fredericks is a long standing member of the Daily Press Editorial team and has published countless political editorials for his newspaper and is a person of note when it comes to hard hitting yet respectful editorials. He knows how to separate his personal political sentiment when writing his editorial pieces. He is just an average everyday Joe who knows how difficult it is to present his thoughts without seeming to be biased. But he manages to pull it off with every editorial piece that he writes. In this case, he found himself writing about President Barack Obama's job speech. He is a man who has heard it all before and has...
4 Pages(1000 words)Essay

...Task Rhetorical Analysis (Everything bad is good for you) Introduction Johnson’s writing, “Everything bad is good for you, games” is written to give a different angle of the thoughts that individuals in the society had. The article is written on a balanced angle both no form of bias. He talks on either side of the argument the righteous and unpleasant sides and gives his opinion on the importance of the children having a form of entertainment. He starts by explaining the importance of games for children and their contribution to the mental development (Johnson, 459). His message is to oppose those individuals, especially parents, who ridicule video games suggesting they are a waste of time preferring...
3 Pages(750 words)Essay

...?The article d “what makes English the dominant global language?” It was posted by a group from the of Honking studying English Language, communication and globalization in under the title LCOM2005( presumably the course code). From this, one can immediately deduce that the primary audience is their peers in the school and other schools studying related courses in the university and beyond. Nonetheless, the international reach of the blog makes the article open to millions of students and researchers interested in the discipline worldwide and these can be deemed as the secondary audience. The article is aimed at discussing the English as the dominate global language and, also acts as a rebuttal to retrospective arguments claiming... article d ...
4 Pages(1000 words)Essay

...of rhetorical methods. Through the use of good argument construction her position on the energy and environmental needs in America is made clear and consistent with her formal platform stance. Warren’s campaign position where energy and the environment are concerned is based on five different perspectives. Those five perspectives are to improve the economy, to keep families healthy, to protect national security, to address climate change, and to protect and preserve the environment for our children. These arguments are first based upon the emotional aspects of how they relate to the issues of environment and energy. She uses imagery of family, children, and the future to support her beliefs in an attempt to sway her...
4 Pages(1000 words)Essay

...Ohioans’ misery and the “prescribed dose” to end these miseries by their governor. The audience, who happen to be the citizens of United States and Ohioans to be precise, and the topic, came in time when the United States was in a verge of collapsing economically and addressing economic issues and combining them with the political good will was objective. The use of pathos, logos and ethos by the Ohio governor, Mr. John Kasich, combined with imagery and rhetoric questions was not only objective but convincing in delivery of his speech on opportunities and the appropriate approach to end the Ohioans’ misery of poverty and joblessness. The use of imagery to describe the wellbeing of Ohioans in the wake of a new political...
4 Pages(1000 words)Essay

...The article, “President Advises Freshmen on a Journey That Will a Lifetime” centers on the address by Peter Likins, the Eighteenth President of the University of Arizona at the Freshman Convocation in the Centennial Hall on 23rd August 1988. The idea of the speech was to motivate the freshmen of the college to carry on and emerge successful in their education journey. The speaker uses rhetorical strategies to motivate the freshmen and the main methods used are analogy, cause and effect and comparison. The speaker first begins with a mention of the last rally they had during the welcome celebration and introduced the concept of work and play. The welcome celebration was like a play while the serious part or the educational phase... –...
5 Pages(1250 words)Essay

... Submitted) A Rhetorical Analysis of ‘A Modest Proposal’ by Jonathon Swift In the article ‘A Modest Proposal’,Jonathon Swift makes use of ethos, pathos and logos in order to convince his audience of his argument, though it is not successful purely due to the extremity of the subject matter. By appealing to the emotionality and sentiments of the audience, the author uses pathos to create sympathy and an emotional reaction within the reader. He uses ethos in his arguments to appeal to the morality of the audience, and also makes use of logos to present a logical situation and solution to the issue at hand. The rhetorical situation of this article is made up of three parts. Firstly, the exigence, or problem presented is the issue... of an...
4 Pages(1000 words)Essay

... Obama’s speech on Gun Violence The video is a speech of president Obama discussing a package on how to combat gun violence. Obama addresses the victims of previous shootings in the Sandy Hook elementary school as he discusses the political and administrative policies under implementation to reduce gun violence. Obama explained that the government was experiencing difficulties in pursuing legislation on gun laws but insisted that his regime was doing its best to address the agenda. He stated that there is no law or legislation that has, maximum ability to eradicate all forms of violence or tragedies, but the government was doing its best to control gun violence. He asserted that it was the role of the government to take... Obama’s speech on...
2 Pages(500 words)Annotated Bibliography

... Rhetorical Analysis A Rhetorical Analysis is a form of criticism or close reading that works using the principles of pretension to analyze the relations between a text, an author, and an audience. Rhetorical analysis may be practically applied to virtually a text or image a speech, or in this case an essay. This paper aims to draw a visual-spatial rhetorical analysis on the immigration laws in the government of Arizona, a state viewed as one of the key points of illegal entry. The current growing concern around national fear about illegal immigration has made the American public to constantly keep hearing the same chorus ‘Secure the perimeter first, then discuss about migration reform.’ The indication appeals to civic sentiment... and...
5 Pages(1250 words)Essay

Let us find you another Essay on topic Aristotelian rhetorical analysis for FREE!