Getting Started with a Poem - Assignment Example

Comments (0)
Add to wishlistDelete from wishlist
Cite this document
Summary
“I will think of you, you who are so far away you have caused me to look up at the stars”. It seemed like a romantic poem about lovers. However, when read a second time, it is…
Download full paperFile format: .doc, available for editing
HIDE THIS PAPERGRAB THE BEST PAPER95% of users find it useful 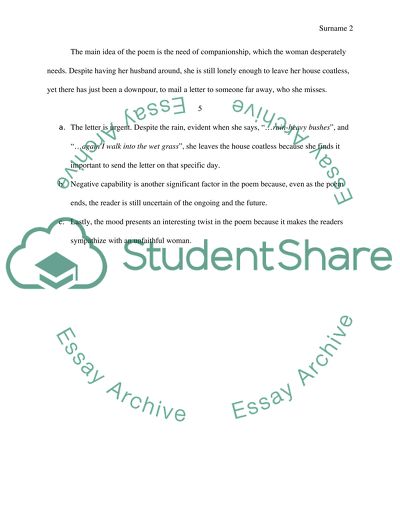 Extract of sample "Getting Started with a Poem"

“Getting Started With a Poem Assignment Example | Topics and Well Written Essays - 250 Words”, n.d. https://studentshare.org/english/1696292-getting-started-with-a-poem.
Comments (0)
Click to create a comment or rate a document

CHECK THESE SAMPLES OF Getting Started with a Poem

...?Your Full Your Teacher’s 28 February Poem Review The Crazy Woman by Gwendolyn Brooks is, seemingly, about a woman who goes against the custom of singing in May, a time for happy songs, choosing to sing in November instead. Whether this is because she cannot sing a song of May in tune, or because she wants to go against the grain is open for interpretation. However, upon closer examination, it seems that this is a poem about a rebellious soul; someone who does not want to follow the rules arbitrarily set by the society. The poem can be taken to be a sort of ode to the women’s liberation movement. It is about a woman who does not follow what is expected, but rather marches to the beat of...
2 Pages(500 words)Essay

...?Still I rise by Maya Angelou “Still I rise” is a stirring poem which depicts the determination of the speaker to ignore and rise above those who discriminate against her. The speaker is an African-American and has faced racial discrimination, as well as the legacy of being from slave parentage. However, instead of despairing, she gives a rousing dramatic monologue which shows her disdain for this discrimination and tells of how despite all the hardships she will continue to rise above it all. Angelou uses various forms of figurative language in her poem to better convey the message to the reader. This essay will explore some of these elements and see how they add to the poem. In stanza...
2 Pages(500 words)Essay

..., With bucketsful of water to sluice the dark, And make the roses hang their dripping heads”. (Sasson, lines 13-15). The images of roses drenched in raindrops and the sound of thunder present the nature in its most beautiful form. The poet wants to enjoy these attractive sights of the nature so that his mind is distracted from the repulsive thoughts of war. The whole poem is full of images which help the reader in creating pictures of those things mentioned by the poet in his poem. Even the simple things like books are vividly described by the poet, “Dressed in dim brown, and black, and white, and green, And every kind of colour. Which will you read?” (Sasson, lines 18-19). The reader upon reading these...
5 Pages(1250 words)Essay

...of the guests In finery skeletons are left to their rest The story is told by the stains on her dress The hand of fate has a brutal caress It was difficult to use the two tags in a poem, since the images do not lend themselves to anything profound. Mostly trying to use them as symbols for male and female I kept getting clichés. Finally I just started to write, first imagining these stains on a tablecloth, then on a wedding tablecloth and finally it seems right to use a white satin wedding dress. Because it was nearly impossible to set up iambic pentameter the sonnet and sestina were discarded. These lines and the subject matter as it developed for me did not lend itself to a group...
3 Pages(750 words)Essay

...Your full May 11, Analysis “The Mother” by Gwendolyn Brooks is one of my favorite short poems.The narrator is an unfortunate mother describing her feelings that she has about her aborted children. Although she admits to her felony and is guilty, yet she articulates her love for the dead children. The poem starts with addressing the social problem of abortion, and how mothers suffer from the predicament of aborting their children. The narrator tells the story of her own life, and states how she is reminded of her misdeed through “the voices of my dim killed children” (line 11). She constantly feels the remorse of seizing her children’s luck, life, sweets, births, names, baby tears, games, tumults, marriages, happiness, and sorrows... . The...
1 Pages(250 words)Assignment

...Poem in the style of Dante Inferno The Contrapasso Punishment Contrapasso in his poem presented certain punishments for various sins people committed. He believed that every sin had its price to pay. For instance, when an individual is charged with murder, the person he was submerged in the blood level metaphorical for the blood amount the person he had killed shed when he was being murdered (Lansing, 2000). This was an enforcement of what is called divine justice similar to the retaliation laws in the bible. The law states, “Every sinner should be punished in the same manner in which he or she had sinned.” (Lansing, “Contrapasso” 220). Some of the punishments as presented by Contrapasso were inhuman in nature and that meant... that if an...
1 Pages(250 words)Assignment

...Getting started on Twitter Getting started on Twitter In case of those keen on the social media, Twitter is then not a new term to them. Twitter is a micro-blogging platform and you are limited to 140 characters per post, one can however choose to write fewer than these. A Twitter account is free and it allows an individual to tell others what they are up to, what they are thinking, where they are, and to give information or inspirational words. Unlike in Facebook where one hasstatus updates and friends, in Twitter one has posts and followers, one can also choose to follow people thereby building their own network. On your homepage, you will see posts of the people you...
5 Pages(1250 words)Essay

...Poem Reading by Vocal delivery of a poem is a complicated task because it requires deep understanding of the text and certain eloquence. While reading for the first time it was difficult to capture the exact meaning of the author and convey it with the help of intonation and voice. I have noticed that making right pauses gives a poem coherency and can reveal author`s message. However, it is not that easy to understand where it is necessary to make all stops after the first reading because logical pauses do not always coincide with punctuation marks. Moreover, it is important to pronounce different words with different loudness to create necessary rhythm, and it is also possible only after...
1 Pages(250 words)Essay

...Carrier of Ladders: the Judgment of Paris by W.S. Merwin The poem ‘The Judgment of Paris’ by Merlin is a recreation of an ancient Greek mythical story, where three goddesses of Greek places a young prince with an ordinary mind Paris in position that defines the future of troy. It is a position where even intelligent individuals placed under the same circumstances could not be able to make a rational decision. However, the criticality of the decision is because Paris` decision would either save troy or result in war essentially leading to the doom of troy. Therefore, the poem is characterized by stress in the end lines of some stanza, ‘you will forget anyway’, ‘you will suffer anyway’ and ‘you will lose...
2 Pages(500 words)Essay
sponsored ads
Save Your Time for More Important Things
Let us write or edit the assignment on your topic "Getting Started with a Poem" with a personal 20% discount.
GRAB THE BEST PAPER

Let us find you another Assignment on topic Getting Started with a Poem for FREE!