Comments (0)
Add to wishlist Delete from wishlist
Cite this document
Summary
Judging from the throng of expectant women seated in the well-lit, air-conditioned waiting room of the obstetrics practice located in the city’s tallest skyscraper, it was apparent that Mohammed Bugnah is at the very top of his profession. One at a time, the women make their…
Download full paper File format: .doc, available for editing
HIDE THIS PAPERGRAB THE BEST PAPER91.8% of users find it useful 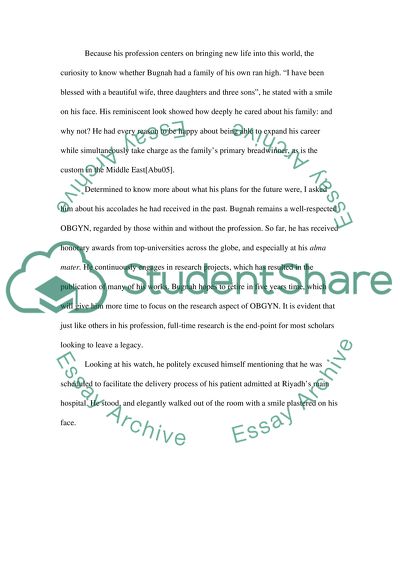 Client profile: Mohammed Bugnah Judging from the throng of expectant women seated in the well-lit, air-conditioned waiting room of the obstetrics practice located in the city’s tallest skyscraper, it was apparent that Mohammed Bugnah is at the very top of his profession. One at a time, the women make their way into his office and leave with an elated look on their faces. Clearly, he must be doing something right to appease these highly irritable mothers-to-be!
Bugnah’s has been working as an obstetrician-gynecologist (OBGYN) for the better part of his fifty-seven years on this earth. He completed his medical training in Canada back in 1970 despite the challenges he faced as a foreigner of Middle-Eastern decent. Bugnah cites language barrier as the main obstacle that impeded the training process. Born and raised in Saudi Arabia, he was fluent in Arabic, and could barely speak English. This remained the case even after he decided to enroll in medical school in a foreign country. He admits that this disadvantage prompted him to work harder than his counterparts who were born and bred in Canada. The fact that he was also sure about what sub-field he wanted to specialize in helped him focus all his energy in perfecting his craft. “I could already see the finish line from the race’s starting point,” he retorted when asked about whether he was sure whether this was the career, he had always wanted.
Because his profession centers on bringing new life into this world, the curiosity to know whether Bugnah had a family of his own ran high. “I have been blessed with a beautiful wife, three daughters and three sons”, he stated with a smile on his face. His reminiscent look showed how deeply he cared about his family: and why not? He had every reason to be happy about being able to expand his career while simultaneously take charge as the family’s primary breadwinner, as is the custom in the Middle East (AbuKhalil).
Determined to know more about what his plans for the future were, I asked him about his accolades he had received in the past. Bugnah remains a well-respected OBGYN, regarded by those within and without the profession. So far, he has received honorary awards from top-universities across the globe, and especially at his alma mater. He continuously engages in research projects, which has resulted in the publication of many of his works. Bugnah hopes to retire in five years time, which will give him more time to focus on the research aspect of OBGYN. It is evident that just like others in his profession, full-time research is the end-point for most scholars looking to leave a legacy.
Looking at his watch, he politely excused himself mentioning that he was scheduled to facilitate the delivery process of his patient admitted at Riyadh’s main hospital. He stood, and elegantly walked out of the room with a smile plastered on his face.
Work Cited
AbuKhalil, Asad. "Women in the Middle East." 11 October 2005. Foreign Policy in Focus (FPIF). 4 May 2015 . Read More
Share:
Tags
Cite this document
(“Ch. 5 Writing Today p. 63-83 other excerpts from the Textbook Essay”, n.d.)
Ch. 5 Writing Today p. 63-83 other excerpts from the Textbook Essay. Retrieved from https://studentshare.org/english/1693223-ch-5-writing-today-p-63-83-other-excerpts-from-the-textbook

CHECK THESE SAMPLES OF Ch. 5 Writing Today p. 63-83 + other excerpts from the Textbook

...?Running Head: 5 P+P ideas on SSADM, Merise 5 P+P ideas on SSADM, Merise Perceptions & Preconceptions  Assumptions  Character of object domain  Cognitive Bias The basic assumption of SSADM (Structured System Analysis and Design Method) is the set of standards using a combination of text and diagrams through the whole phase of system design from initial requirements to the final physical design of application (Cutts, 1991). The basic feature that it characterizes is object domain or object oriented approach making it much closer to real world object mapping, thus simplifying the technology. The cognitive bias of the program is that the application is not much in use as for its dependence on specific hardware. The Merise has the basic...
4 Pages (1000 words) Research Paper

... ideas and vocabulary presented in the section reading. Other questions are designed to engage the student in higher level thinking by asking them to evaluate a statement from the text or to think critically about information from the section just read. This is not, however the only assessment offered by the textbook. There is an accompanying bank of summative tests that can be electronically altered to suit the specific teacher’s needs. There is also a guide that accompanies the textbook called the Alternative Assessment Handbook. This is provided to assist the teacher in implementing pertinent authentic assessments for the students. These activities include an array of cooperative learning activities, speeches, games, presentations...
4 Pages (1000 words) Essay

... of proof throughout the argument. These include logos, pathos, ethos and mythos. Logos creates inferences through reasoning, pathos appeals to the emotions, ethos calls on the speaker’s good character to vouch for the correctness of his proposition, and mythos draws on cultural values as the basis for supporting the proposition. Fifth, anticipate any opinions that oppose your proposition and arguments, and offer a rebuttal to refute the opposition. The speaker must be prepared by doing his research beforehand on the most common objections to the proposition. Sixth, try to offer novel evidence to further strengthen your rebuttal. Novel evidence is something your audience has not yet encountered in other venues. The novelty...
5 Pages (1250 words) Essay

...) views culture as a multi-level entity comprising five levels. The global culture shapes one’s relations at the international level among persons of different nationalities. National culture determines one’s behaviour and relations toward fellow citizens of varied ethnic orientations. Organizational culture is the way people relate with each other in an organization and with others outside the organization in accordance to the organization’s pre-set cultural affiliations. Group culture is informed by one’s alignment to a particular group characterized by gender, age, religion, and other social aspects. Individual culture is one’s values, norms, and preferences that are generated from within an individual. All these levels interact to shape...
1 Pages (250 words) Essay

... What does it mean to write “hit-or-miss” for YOU? To write “hit-or-miss” meant writing without direction and devoid of the “guiding instinct” that characterizes a good writer. Have you written this way in the past? Why? Yes and to some degree I still have the tendency to write in a “hit or miss” fashion. It is because sometimes I struggle on how to organize my ideas so I do a trial and error writing to see how my composition goes. Writing this way usually ends up in a bad composition. How do you see yourself fixing this? I have device a method to fix this. I first make an outline before writing and rewrite it. I also literally “sleep” on it meaning, I polish my essays after a good sleep so I can look at it again from a fresher...
3 Pages (750 words) Essay

Banquet for a delegation Introduction Across the world, there are millions of people that are characterized by unlimited cultures and traditions. When in social places that have a combination of these cultures, it is always a perfect opportunity to understand and work with people. Across these cultures, preferences for meals, entertainment as well as codes of ethics varies considerably (Ang 24).
Setting up the environment
The number of visitors that will be attending the banquet will determine the kind of table arrangement and set up that will be required. In general, there are various kinds of arrangements that can be used in setting up the environment for the visitors, for instance, in order to maximize the number of banqu...
2 Pages (500 words) Essay

... was originally practiced by all Muslims when at war or on a long journey to avoid illicit sex. However, it was found to disenfranchise the women and the children born out of the marriage after the man had left even if he paid all the dowry and penalties of divorce. This is a big deal in Islam because inheritance rights have the capacity to influence ones fate in the now and in the hereafter. The other modern problem between the Shiites and the Sunnis is the practice of medical interventions, which are considered unlawful such as abortion and family planning including newer forms of treating sterility. Q2.similarities in practice and traits between the Shiites and the Roman Catholics The Shiites have democratic privileges of choosing...
2 Pages (500 words) Assignment

...﻿Writing Today Proposals Unlike most textbooks tackling writing which are ironically dull and monotonous, Writing Today is easy to comprehend and read, and at the least entertaining. The book offers vital tips on writing practices for a variety of genres, including reports and proposals. A proposal is often a statement of purpose presented for someone to accept it. A proposal has a main aim of convincing the target to fund or support your project. In Writing Today chapter 11, the authors focus on how to structure and write a proper proposal. The style adopted by the authors is generally simple and straightforward, only focusing on the relevant parts. The chapter is characterized by proposal examples which make it easier for the learner...
2 Pages (500 words) Essay

Let us find you another Essay on topic Ch. 5 Writing Today p. 63-83 + other excerpts from the Textbook for FREE!