Comments (0)
Add to wishlistDelete from wishlist
Cite this document
Summary
Moses Munene, A Kenyan immigrant who immigrated to USA in 1995 after completing his undergraduate studies in Philosophy in Kenya. Mr. Munene was 24 when he immigrated to USA through the USA Green…
Download full paperFile format: .doc, available for editing
HIDE THIS PAPERGRAB THE BEST PAPER96.3% of users find it useful 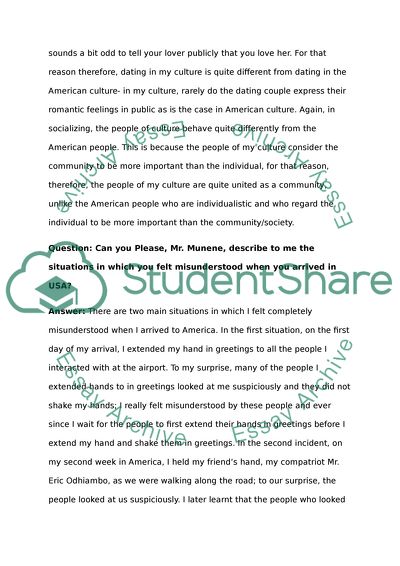 Extract of sample "Informal interview with immigrant from kenya"

“Informal Interview With Immigrant from Kenya Essay”, n.d. https://studentshare.org/english/1692583-informal-interview-with-immigrant-from-kenya.
Comments (0)
Click to create a comment or rate a document

CHECK THESE SAMPLES OF Informal interview with immigrant from kenya

...?Informal Interview Mr. is a HRD Manager he has been a practicing HR Professional for more than 25 years. He graduated at the top of his in one of the leading university in the country. He took up psychology and have mastered in business management and administration. My rationale for choosing the person is his early exposure in the labour sector specifically in the demanding food service industry while a student. This experience enabled him to learn the concerns and issues of the common labourer. He was able to learn the different sources of motivations of regular labourer who are always in the frontlines. His unique perspective emanating from his experience as a crew and now as a manager and decision maker would enable me to learn...
3 Pages(750 words)Essay

...? Informal Interview Table of Contents Table of Contents 2 0 Introduction 3 2.0 3 3.0 Impressions of the Interview 4 3 Learnings 4 3.2 Interviewing process 5 4.0 Conclusion 6 5.0 Questions 7 Reference 7 1.0 Introduction The assignment is based on the interview session organized with a HRD professional from a top retail organization of the US, i.e. Walmart. In this regard, the paper shall emphasize on the qualities of the individual and its significance in bringing efficiency to the designation. This session will help an individual to develop interviewing and note-taking skills. Thus, the detail of the interview session is depicted in the further discussion, highlighting various attributes in the process of interview. 2.0 Description...
3 Pages(750 words)Research Paper

... different strategies and factors that could motivate people. A successful organization is believed to have applied the best ways on motivating the human resource because employees are influenced to do things they are motivated at through taking care of their best interest (Bruce and Pepitone 2). Questions addressed to the interviewee Prior to the actual personal interviewee with the respondent, the proponent developed rapport and this created an impact why the interview had just flowed smoothly, allowing the proponent to generate important information for the following questions. 1. What is your own way of defining Human Resource Development? 2. So far, as HRD Specialist, what are the common problems you encountered? 3...
3 Pages(750 words)Research Paper

...? (Assignment) An informal interview The reason for selecting Mr. Ralph, the Human Resources Manager in Nike International for the interview is the long years of experience he has in the profession. He was kind enough to spend his precious time answering my queries regarding the profession and the responsibilities involved. From the words of Mr. Ralph, it became evident that the HR management involves the management of human mind. The different steps adopted in the process are communicating the goals of the company clearly with all employees, explaining each employee as to what their role is in achieving the defined target. Other things are providing enough training to employees for the work they do, ensuring friendly atmosphere, ensuring...
3 Pages(750 words)Research Paper

...? Informal Interview (HRD) ID Lecturer I recently conducted an informal interview with Mr. Jack who is a Human Resources Manager at a local pharmaceutical company. This person is a very extrovert personality who likes to interact with all forms of individuals and does not mind one bit in discussing what he thinks is right and what his judgments are. He believes that life is filled with a lot of color and exuberance if a person wishes to expand his social life and live it the way he wants to live it. There is a great amount of work that Mr. Jack has to do each day since he is accountable for a number of Human Resource related affairs within the company that he works for. He has to set the daily roster, look for new and novel things...
3 Pages(750 words)Essay

... of interview, and contacting the interested candidates after the completion of the process of recruitment. Ali assumes the responsibility to circulate and coordinate all information and documentation about the evaluation of the employees. He ensures the compliance of the organization with the practices of equal opportunity and employment established by the state (“Director of Human”). Ali regularly develops new programs of employee orientation. He administers the benefits and provides the employees with information about retirement and personnel benefits. Salary schedules are maintained and updated by him. Ali has established and maintains an electronic system of employee records that consists of the employees’ application materials...
5 Pages(1250 words)Essay

﻿Psychological Analysis
The interview was conducted in a quiet, and serene environment. The interviewee was accompanied by selected members of his family. They from time to time chipped in about the experiences that they had from the questions that were generated from the interview. They appeared to be highly emotional as the events of their lives were recalled. The interviewee’s body language was one that spoke of internal resignation. It showed that he appreciated the rights that US was offering, but was extremely sad that there was nothing more he could do for his country. He appeared to be slightly embarrassed when asked what things he was enjoying in the US that he could not in his home region (Lokosang 5). His expressed h...
2 Pages(500 words)Essay

...﻿India Immigrant Interview Report Interview Report Arjun Mehta had immigrated to the USA shortly after his graduation in 1980. He had principally come to the USA with the intention of seeking higher studies, but the opportunities available to him after his higher education in the USA were so many that he did not give the decision of staying in the USA for work a second thought. This paper provides a summary and analysis of Arjun’s interview. Arjun Mehta got married to an Indian American girl, named Vida. Vida’s grandparents had moved to America from India in 1918. Vida was born in the USA and was an Indian only by race. Arjun’s marriage to Vida failed because of incompatible attitudes of both. Arjun came from a conservative background...
2 Pages(500 words)Essay

An interview with Mexican immigrant student

... An Interview With Mexican Immigrant Introduction Every year migrants come to the United s with most of them having special interest in education. However, most of the migrants normally have challenges in communication for the simple reason that they do not have a proper command of the English language. Therefore, some of them have to learn English before they can gain entry into the mainstream education system. Amos Rodriguez is a Mexican immigrant student who came to the U.S two years ago to join a college. However, he had to spend one year in an English institute in the U.S. The interview is carried out to find out some of the differences between the education system in Mexico and the U.S. 1. What motivated to pursue your education...
4 Pages(1000 words)Assignment

... English 20th March, Informal Interview with Immigrant The following is a verbatim record of the interview that I carried out on Moses Munene, A Kenyan immigrant who immigrated to USA in 1995 after completing his undergraduate studies in Philosophy, in Kenya; Mr.Munene was 24 when he immigrated to USA through the USA GreenCard Programme. Question: Mr Munene, in your view, how do the Americans behave differently from the people of your culture? Response: The Americans and the people of my culture behave in quite different ways. For instance, in greetings, the people of my culture shake hands warmly and heartily; in American culture, however, although people shake hands in greetings, the shaking of the hands is not done in a warm...
4 Pages(1000 words)Essay
sponsored ads
Save Your Time for More Important Things
Let us write or edit the essay on your topic "Informal interview with immigrant from kenya" with a personal 20% discount.
GRAB THE BEST PAPER

Let us find you another Essay on topic Informal interview with immigrant from kenya for FREE!