Comments (0)
Add to wishlistDelete from wishlist
Cite this document
Summary
There is a clear analysis of the issues of environmental sustainability and measures to be adopted towards achieving the goal of sustainable environment in the future.
According to the report, the…
Download full paperFile format: .doc, available for editing
HIDE THIS PAPERGRAB THE BEST PAPER95.9% of users find it useful 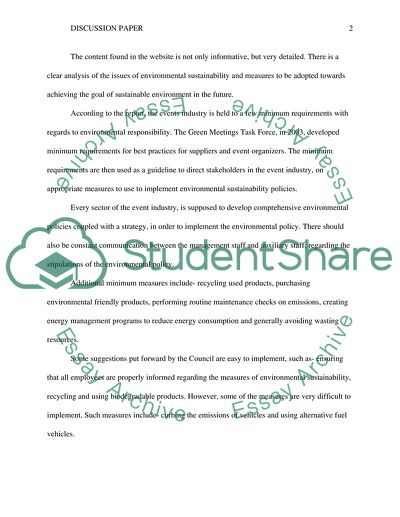 Green Meetings Task Force Report al Affiliation) The content found in the website is not only informative, but very detailed. There is a clear analysis of the issues of environmental sustainability and measures to be adopted towards achieving the goal of sustainable environment in the future.
According to the report, the events industry is held to a few minimum requirements with regards to environmental responsibility. The Green Meetings Task Force, in 2003, developed minimum requirements for best practices for suppliers and event organizers. The minimum requirements are then used as a guideline to direct stakeholders in the event industry, on appropriate measures to use to implement environmental sustainability policies.
Every sector of the event industry, is supposed to develop comprehensive environmental policies coupled with a strategy, in order to implement the environmental policy. There should also be constant communication between the management staff and auxiliary staff, regarding the stipulations of the environmental policy.
Additional minimum measures include- recycling used products, purchasing environmental friendly products, performing routine maintenance checks on emissions, creating energy management programs to reduce energy consumption and generally avoiding wasting resources.
Some suggestions put forward by the Council are easy to implement, such as- ensuring that all employees are properly informed regarding the measures of environmental sustainability, recycling and using biodegradable products. However, some of the measures are very difficult to implement. Such measures include- curbing the emissions of vehicles and using alternative fuel vehicles.
The measures needed to be implemented, to create a sustainable environment, are very costly. The measures require a lot of capital to be implemented. Additionally, the measures require enormous support from the government. However, there is no political will from the government. These are some of the obstacles that may limit the implementation of the measures.
The issue of environmental sustainability has been a hot topic globally. Therefore, I wish to ask a few questions regarding its possibility- Are the minimum measures adopted adequate? Have we reached a point of no return regarding pollution?
References
http://www.conventionindustry.org/StandardsPractices/GreenMeetingTaskForceReport.aspx Read More
Share:
Tags
Cite this document
(“Discussion Paper - Green Meetings Task Force Report Essay”, n.d.)
Retrieved from https://studentshare.org/english/1679795-discussion-paper-green-meetings-task-force-report

“Why, for instance,” he is credited as having continued along these same lines, “should it be said that liberty of the press shall not be restrained when no power is given by which restrictions may be imposed? (136)” Hamilton’s argument was lost to the states, and the first ten amendments of the Constitution reflect the state’s insistence for a Bill of Rights, and first on the Bill of Rights is the right to free speech (137). Neither Hamilton, who was during his life a proliferate letter writer, expressing his views on every subject of the day and many which were not subject to discussion at all (Hamilton 1911, 62); nor the represents of the states who held out against ratifying the Constitution...
7 Pages(1750 words)Report

Their tariffs were decided to be removed within a period of time of 5 to 15 years. With Canada, all the agreements that were signed regarding trade and agriculture were included in this agreement (United States Department of Agriculture). In short, the three countries, after signing the agreement, we're able to buy, sell and invest in international markets and institutions...

Green computing is the latest buzz in the world of computing in order to protect the globe from the lethal attack of global warming. We first have a look at the phenomenon of global warming. Global warming is a dramatic and unexpected surge in the temperature of the earth, which is a common abode for many different species and not just human beings...
7 Pages(1750 words)Report

The design has been prepared and was approved by the client. However, the development phase is not going smoothly. This report analyzes the current status of the project and looks into the financial situation of the project. It also recommends the actions to be taken to bring the project back on track.

The major problem that we are currently facing is the lack of required effort being put in the project. The output of the programmers is not very high and the deadlines for the deliverables are not being met. The programmers are not working solely on this project. Their efforts are frequently being used in the JP Morgan Bank project since that is of a more critical priority, and hence the budget time that should be spent...
7 Pages(1750 words)Report

.... It is like a person who is doing multi-tasking which turns out to be not so very productive at all. Previously, multi-tasking by employees was hailed as a wonderful way to increase efficiency, which as it turned out, ends up a person doing nothing exceedingly well. General Electric shares had peaked at around $60+ in year 2000 and has stagnated since then between $30-$40 per share despite the best efforts of Jeffrey R. Immelt and his team. Discussion If there is one word to describe General Electrics actions today, it is defensive. It is no longer playing an offensive game in world markets because it had been hobbled by its huge bet on the financial market which had turned sour. At this point, it is still in search of a new...
12 Pages(3000 words)Report
sponsored ads
Save Your Time for More Important Things
Let us write or edit the essay on your topic "Discussion Paper - Green Meetings Task Force Report" with a personal 20% discount.
GRAB THE BEST PAPER