Comments (0)
Add to wishlistDelete from wishlist
Cite this document
Summary
The art still very important in modern world. The paper "Art Review" gives information about two modern artists Alex Prager and Mambo. The author discusses the history of the artists' success. The writer gives the detailed analysis of their works and shares own impressions of them…
Download full paperFile format: .doc, available for editing
HIDE THIS PAPERGRAB THE BEST PAPER91.3% of users find it useful 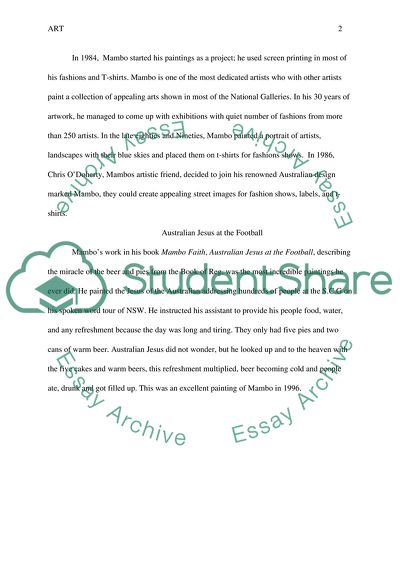 Art Alex Prager’s Work Face in the Crowd On December 11, Alex Prager unvailed, Face in the Crowd, in the most famous exhibition ever shown in New York City. It was an art drawn in Los Angeles sound stage. This piece of art was about the people who were at the airport terminals, lobbies, beaches, movie theaters and other public spaces. Her artwork embodied scenes of cultural memories of images. She used the broad artistic styles and characters to portray and show precisely the time periods at which she took these crowd pictures and photographs on the streets of Los Angeles (Prager, 2010). She could extract and paint the crowd’s emotions and facial appearance; this reflected the triumphs that the society of that era phased. Her pictures and new film of her Face in the Crowd gives and portrays the kind of togetherness among the people who live in a society. They also act as a reminder that being together is a way of standing strong.
Exhibition Pictures in SCAD Museum
Alex Prager is one of the renowned artists in California. Being an inspired lady she believed in taking still photographs and presenting them in different famous world museums. Between July 27, 2013 to December 2013, Prager unveiled still art and pictures of emotionally charged and seductive worlds to SCAD Museum. This became one of the first admired exhibitions in South East for the Los Angeles. She used the charming and the disturbing still and saturated images to capture the attentions of the viewers. These, ever leaves the viewers in suspense wondering which kind of narratives and art knowledge she had (Prager, 2012).
Mambo’s Works
Portrait of Artists
In 1984, Mambo started his paintings as a project; he used screen printing in most of his fashions and T-shirts. Mambo is one of the most dedicated artists who with other artists paints a collection of appealing arts shown in most of the National Galleries. In his 30 years of artwork, he managed to come up with exhibitions with quiet number of fashions from more than 250 artists. In late Eighties and Nineties, Mambo painted a portrait of artists, landscapes with their blue skies and placed them on t-shirts for fashions shows. In 1986, Chris O’Doherty, Mambos artistic friend, decided to join his renowned Australian design marked Mambo, they could create appealing street images for fashion shows, labels, and t-shirts.
Australian Jesus at the Football
Mambo’s work in his book Mambo Faith, Australian Jesus at the Football, describing the miracle of the beer and pies from the Book of Reg, was the most incredible paintings he ever did. He painted the Jesus of the Australian addressing hundreds of people at the S.C.G on his spoken word tour of NSW. He instructed his assistant to provide his people food, water, and any refreshment because the day was long and tiring. They only had five pies and two cans of warm beer. Australian Jesus did not wonder, but he looked up and to the heaven with the five cakes and warm beers, these refreshment multiplied, beer becoming cold and people ate, drunk and got filled up. This was an excellent painting of Mambo in 1996.
References
Demarigny, F. (2005). Flavien Demarigny (Mambo). France: Kitchen 93.
Prager, A. (2010). Alex Prager. Los Angeles: M + B.
Prager, A. (2012). Alex Prager. [New York: Yancey Richardson Gallery].
Stak, O., & Fay, R. (2007). Flavien DeMarigny. Bagnolet: Kitchen 93. Read More
Share:
Tags
Cite this document
(“Art Review Essay Example | Topics and Well Written Essays - 500 words - 1”, n.d.)
Retrieved from https://studentshare.org/english/1676754-art-review

CHECK THESE SAMPLES OF Art Review

...? Self-Portrait: Cindy Sherman’s Un d Film Still #53 Introduction The nature of art has examined a wide variety of modes of expression. One of the most prominent modes of expression since the Renaissance has been portraiture. While during its 16th and 17th century connotations portraiture predominantly functioned in lieu of photography, later centuries witnessed an increased emphasis on the philosophical and experimental potentials of the medium. In the early 20th century artists such as Pablo Picasso implemented portraiture as a means of exploring cubist perspectives on the human self. With the advent of feminist art practices, the late 20th century witnessed the emergence of new forms of expression. Perhaps the most seminal artist...
5 Pages(1250 words)Essay

Art Review on Piece of Art Work by Ber Vasques

...? Art Review Insert Art Review This piece of work is called The Pink Sheriff. It was done by Ber Vasquez. He did this using wood, thread, fabric dyes and fabric. Vaquez did his work by dying men’s underwear using a white and a pink color. That is why the work was called The Pink Sheriff. After dying them, he sews the underwear horizontally. These sewing created lines that reflected the stripes common in prison clothes. The alternation of the lines is from white to pink. After sewing and alternating these lines, the artist prepared stencils using Spanish adjectives. With these stencils he sprayed dark pink paint, which fell onto the sewed pink lines. Regarding the face, the artist used pieces of men’s underwear. He sews the face using...
3 Pages(750 words)Essay

... An Art Review – Works by Oscar Bluemner at Hunter Museum of American Art, TN The exhibition particularly showcased some of the enthralling creations by Oscar Bluemner whose ingenuity had earned for him a critical acclaim, being the vermillionaire due to his obsessed utilization of scarlet hues in most of his works. Such collection entails a range of Bluemners prevailing concepts which have had influence over contemporary artists and those who are presently inclined to blend a touch of his identity to refine their pieces. The theme was central to managing the intensity and distribution of colors to the effect of departure from rigid and severe reality for the purpose of fixing into perception of a viewer another real dimension that rather...
2 Pages(500 words)Term Paper

...Mona Lisa by Leonardo Da Vinci1 Leonardo Da Vinci is known for being one of the most famous artists in human history. Da Vinci was also a scientist, inventor, and doctor in addition to his work as an artist. The reason why he was so good with drawing humans is due to his study of actual human cavaders. Even though the Mona Lisa is a painting, Da Vinci was more skilled at drawing. Da Vinci has very few pieces of art left, in part because some of his pieces of art were either stolen or damaged, as well as the fact that Da Vinci always wanting to paint or draw the perfect piece of art. The Mona Lisa was painted somewhere between 1504 and 1519, and was commissed by an Italian, Francesco Del Giocondo. The painting has drawn much debate down...
5 Pages(1250 words)Assignment

..., depression, posttraumatic stress disorder and trauma. The therapeutic procedures that are administered on the individuals who are experiencing these disorders range from the application of solution focused therapy, cognitive behavioral therapy and client specific therapy. The clients that are served by the organization range from six to eighty years of age. D. Review of Art Therapy Literature on Topic A valuable advancement that has been observed in the field of art therapy for posttraumatic stress disorder has been demonstrated in the case of younger patients including children and young adults. In their article titled The Effectiveness of Art Therapy Interventions in Reducing Post Traumatic Stress Disorder (PTSD) Symptoms in Pediatric...
12 Pages(3000 words)Research Paper

... Art Review The oil on canvas painting by Romanus Isichei, “Still Searching” is a beautiful and intriguing exhibit of colours and creativity. The painting was displayed in 2001 at the Denver Art Museum. The art exhibit doesn’t just give a social meaning to the onlookers but it also grasps the attention with its beauty, intricate design and the creative amalgamate of colours. Isichei is of the opinion that art should not just be visually appealing, it should also send a socially meaningful message. The painting is on two canvases and bright, bold colours are used to exhibit footprints of different sizes and in different directions. Most of the foot prints are in opposite directions or overlapping and crossing each other. The background has...
2 Pages(500 words)Essay

...Your full February 8, Picture Analysis The picture has been taken in speer street with champa in Denver. The image belongs to the Denver Art Museum (DAM), which is the largest art museum located between Kansas City and the West Coast. The image size is 3264 × 2448. Designed by the artist Jonathan Borofsky, the image is of two dancers of the Denver Art Museum. The design of the dancers is 3D, and they are dancing holding one another’s hands, and waving at the spectators. The overall aura seems to be very light, as the dancers seem to be enjoying life. The design is extra thin, but it looks cute with the overall image of the picture. The dancers seem to be quite big as compared to the rest of the scene, and the spectators will have to raise...
1 Pages(250 words)Essay

... College: Art review The painting is en d “Three fishermen” an artwork was painted in 1992 by Scott Fraser a German resident. The painting is situated at Denver Art Museum, 100 W 13th Avenue, CO 80204, in the United States. The art work brims with humor, layers of meaning and mystery, all realized in an oil paint on a canvas. The painting is a decrepit old chair that is covered in rose brocade. There is a painting of three fishermen who are in a tempest tossed boat captured above the chair. Beside the chair, there is a broom and in-front of it laid a length of an electric wire and buttered sports shoe. The arm chair holds a distended fish. The painting holds an obvious joke that the placed fish corresponds to the efforts of the fishermen...
1 Pages(250 words)Essay

Chilli According to many of the paintings that I have seen and word on the street of his works, I can say that Olivero Balcells is one of the most talented artists in the present world. The artwork on chili and its uses fascinated me, but I guess it is because chilies are what I can call my weaknesses. The painting is 61 by 91.5 in size. It is titled Chilli at the top and Chile in the rear end, painted by Olivero Balcells. The photo is incorporated many colors that are very eye catching. There are also different drawings of chilies that come in different sizes small or large with different colors. It is thinly framed, and the present are some sawing that underline the titles. The mere fact of the photo having all these characteris...
1 Pages(250 words)Essay
sponsored ads
Save Your Time for More Important Things
Let us write or edit the essay on your topic "Art Review" with a personal 20% discount.
GRAB THE BEST PAPER

Let us find you another Essay on topic Art Review for FREE!