Comments (1)
Add to wishlistDelete from wishlist
Cite this document
Summary
The study evaluates why food manufacturers use the substances and why they are allowed to use the chemicals. It will also pay special attention to an example of companies and foods manufactured with steroids…
Download full paperFile format: .doc, available for editing
HIDE THIS PAPERGRAB THE BEST PAPER95.7% of users find it useful 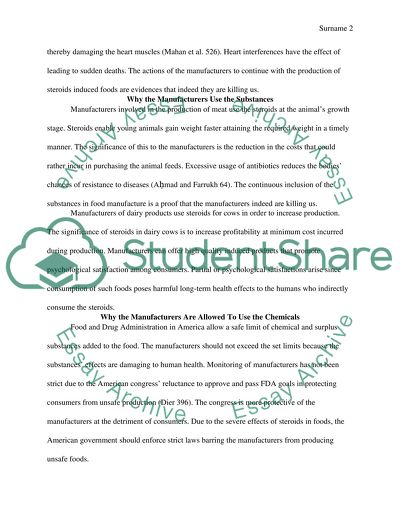 Extract of sample "Are Food Manufacturers Killing Us"

﻿Steroids: Are Food Manufacturers Killing Us?
Introduction
Steroids are the substances containing a large class of organic compounds with a characteristic molecular structure with four rings of carbon atoms. Antibiotics are medicinal substances used in inhibiting the growth of disease-causing microorganisms. The purpose of incorporating the substances is to increase the competitive advantage of the products over their enemies. However, the substances when consumed by human being ultimately pose serious health effects including death in the end.
Example of Companies and Foods manufactured with steroids
The companies are engaging in the production of the foods that endanger consumers’ lives include McDonald’s, Pringes, Ritz Crackers and Starburst. Steroid-contained product produced by McDonald’s is the French fries, having milk as an ingredient. Ritz Crackers manufactures the red velvet cake mix that contains chemicals that are unsafe for consumption, hence risking the consumers’ lives.
Effects of Steroids
Consumption of steroids causes adverse and severe side effects including tumors, high blood pressure, kidney tumors, and reduced sperm count prostate cancer. Possible cases of cancerous infections may result from consumption of steroids in manufactured foods. The cancerous infections may have no treatment hence higher probability of leading to death. Recurrent use of foods containing steroids may cause infertility and pattern baldness in men (Mahan et al. 527).
Steroid usage leads to cardiovascular diseases including heart attacks and strokes. Steroids effects changes in the levels of lipoproteins carrying cholesterol in the blood. Steroids increase the risk of blood clotting in the blood vessels, and this disrupts the normal blood flow thereby damaging the heart muscles (Mahan et al. 526). Heart interferences have the effect of leading to sudden deaths. The actions of the manufacturers to continue with the production of steroids induced foods are evidences that indeed they are killing us.
Why the Manufacturers Use the Substances
Manufacturers involved in the production of meat use the steroids at the animal’s growth stage. Steroids enable young animals gain weight faster attaining the required weight in a timely manner. The significance of this to the manufacturers is the reduction in the costs that could rather incur in purchasing the animal feeds. Excessive usage of antibiotics reduces the bodies’ chances of resistance to diseases (Aḥmad and Farrukh 64). The continuous inclusion of the substances in food manufacture is a proof that the manufacturers indeed are killing us.
Manufacturers of dairy products use steroids for cows in order to increase production. The significance of steroids in dairy cows is to increase profitability at minimum cost incurred during production. Manufacturers can offer high quality induced products that promote psychological satisfaction among consumers. Partial or psychological satisfactions arise since consumption of such foods poses harmful long-term health effects to the humans who indirectly consume the steroids.
Why the Manufacturers Are Allowed To Use the Chemicals
Food and Drug Administration in America allow a safe limit of chemical and surplus substances added to the food. The manufacturers should not exceed the set limits because the substances’ effects are damaging to human health. Monitoring of manufacturers has not been strict due to the American congress’ reluctance to approve and pass FDA goals in protecting consumers from unsafe production (Dier 396). The congress is more protective of the manufacturers at the detriment of consumers. Due to the severe effects of steroids in foods, the American government should enforce strict laws barring the manufacturers from producing unsafe foods.
Works Cited
Aḥmad, Iqbāl and Farrukh, Aqil. New Strategies Combating Bacterial Infection. Weinheim: Wiley-VCH, 2008. Print.
Dier, Joseph K. "S.O.S. From the FDA: A Cry for Help in the World of Unregulated Dietary Supplements." Albany Law Review 74.1 (2011): 385-419.
Mahan, L K, Sylvia Escott-Stump, Janice L. Raymond, and Marie V. Krause. Krause's Food & the Nutrition Care Process. St. Louis, Mo: Elsevier/Saunders, 2012. Print. Read More
Share:
Tags
Cite this document
(“Are Food Manufacturers Killing Us Research Paper”, n.d.)
Retrieved de https://studentshare.org/english/1672478-steroids-anitbiotics-sprays-are-food-manufacturers-killing-us

“Are Food Manufacturers Killing Us Research Paper”, n.d. https://studentshare.org/english/1672478-steroids-anitbiotics-sprays-are-food-manufacturers-killing-us.
Comments (1)
Click to create a comment or rate a document

va
vaughngrimes added comment 1 year ago
Student rated this paper as
This paper saved me today. I liked the structure. It was very useful for my english course.

CHECK THESE SAMPLES OF Are Food Manufacturers Killing Us

Solon: The Story of a Wise Lawgiver of Athens

The Benefits and Risks of Food Steroids, Antibiotics, and Sprays in the Eye of the Food Manufacturers and the Consumers

... and FDA (Gale et al., 2009). Applications can be downloaded through phones to enable people get the recalls by going to the specific website. Imported food has posed great risks to the U.S citizens while certain organizations have developed strategies for ensuring food safety for all Americans. Several measures have been taken to ensure that all imported foods match the safety standards of foods manufactured in the U.S. consumers and health care professionals have been encouraged to report all side effects or medication errors realized from the use of both the approved and unproved food and drug substances in U.S. References Edelstein, S. (2009). Food and nutrition at risk in America: Food insecurity, biotechnology, food safety... ?...
4 Pages(1000 words)Research Paper

...Killing Us Softly Analysis A dream house, luxurious car, noble apparel and an ideal face and body – these are what most of us are striving hard to work for. Many people spend inconsiderable time, lots of money, and voluminous sweat to go after these things they feel are important, even though they admit they can live without. Advertisements are pervasive. They are found on streets, schools, restaurants, hospitals, and comfort rooms. Aside from that, they are like communicable disease that poisons the subconscious mind. All advertisements deceive people by putting in their subconscious mind that they can be the richest man, sexiest creation, and most beautiful woman who ever lived on...
3 Pages(750 words)Essay

Fast Food in US

...the long road. This is what Eric Schlosser took a deep look into in the book Fast Food Nation. Using witty examples and biting realism, Schlosser was able to tear apart the wrapper surrounding the Big Mac that is the fast food industry. Showing the whole what they really were eating, Schlosser offered a unique journalistic look into the making, formation, and distribution of the one of the most beloved things in America: Food. The companies probably weren't expecting this to happen. They were safe under the wrappers they had made, and didn't want people to know how unhealthy the food is, and how it really is all part of a consumer fraud in a way, where...
5 Pages(1250 words)Essay

...International Business Law This paper encompasses a discussion of WTO International Law rules concerning tariffs and duties imposed by Customs Service. More specifically, it will address the issue of a court appeal regarding the Customs Service refusal to impose duties in a particular situation. Facts of the Case: The parties involved are the Expando Co. Expando manufacturers of wristwatch bands, Flexo Co. manufacturers of similar watchbands and Customs Service. The question that needs to be answered is: does Flexo have grounds to appeal and if so will the court overrule the decision of Customs Service The answer is yes. The situation was that the Expando Co. in State A received a wide variety of general subsidies from the State... A...
2 Pages(500 words)Essay

Killing Us Softly by Jean Kilbourne

...English 10 October Annotated Bibliography Adams, Mike. “The U.S. Food Industry, FDA, and USDA Are Highly Corrupt to Protect Profits, Not People.” Natural News. n.d. Web. 10 Oct. 2012. The author takes its cue on the courageous step being undertaken by the Canadian Heart and Stroke Foundation in banning junk foods, which the FDA and USDA are not bent on doing since they are allegedly being corrupted by food manufacturers. The article identifies refined and processed foods with three properties that are critically alarming to the human health. First, processed foods are lacking in nutritional value since the natural fiber, minerals, oils...
2 Pages(500 words)Research Paper

...﻿Mercy Killing or Just Killing? Euthanasia is a contentious topic in the world, which has caused division both in the medical field as well as among various religions. It entails the act of ending an individual’s life deliberately in order to relieve suffering (Snyder 28). This paper examines both arguments in a critical manner thereby integrating arguments for and against the issue. It begins by first discussing reasons for accepting euthanasia by providing real life examples for conditions justifying the position. Later, the paper examines reasons opposing euthanasia by whatever means and condemns the practice. Proponents for euthanasia have passionately defended their position for accepting and...
6 Pages(1500 words)Essay
sponsored ads
Save Your Time for More Important Things
Let us write or edit the research paper on your topic "Are Food Manufacturers Killing Us" with a personal 20% discount.
GRAB THE BEST PAPER

Let us find you another Research Paper on topic Are Food Manufacturers Killing Us for FREE!