Comments (0)
Add to wishlistDelete from wishlist
Cite this document
Summary
Video games have over the years become part and parcel of children and teenagers across Europe and America. As part of entertainment, video games…
Download full paperFile format: .doc, available for editing
HIDE THIS PAPERGRAB THE BEST PAPER95.6% of users find it useful 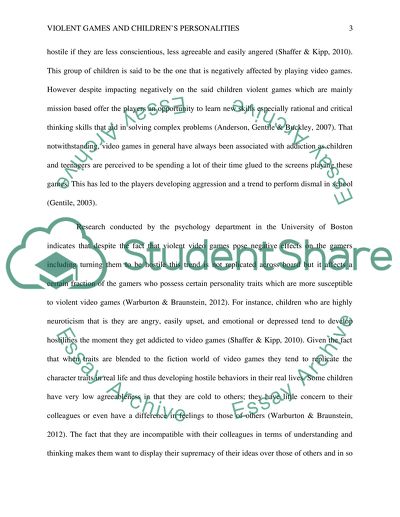 Download file to see previous pages The games are designed in a manner that instills realism to the games and the moment one plays them it gives a natural feeling (Shaffer & Kipp, 2010). Initially, the games were developed for mere entertainment purpose but over time the objective has shifted to include other aspects that are unfavorable to young children who are mostly addicted to these games. For instance, the video game Grand Theft Auto vice city is a mission-based video game that incorporated wrong vices such as violence, crime and prostitution. This indeed is wrong as the games instill wrong traits to the people who play them. But despite the negative vices that comes along the games they also have positive impacts on the gamers as they help them develop a high degree of judgment & problem solving as the games provides them with dilemma situations where critical decision have to be made and which have great impacts on the overall progress of the game (Gunter, 1998; Child Development Institute, 2003).
According to psychology, the personalities of human beings tend to vary and thus different people will possess different personality traits depending on certain factors that have influenced the growth of that particular person (Gentile, 2003). Research conducted by Pennsylvania State University indicated that children who play video games are prone to be more hostile if they are less conscientious, less agreeable and easily angered (Shaffer & Kipp, 2010). This group of children is said to be the one that is negatively affected by playing video games. However despite impacting negatively on the said children violent games which are mainly mission based offer the players an opportunity to learn new skills especially rational and critical thinking skills that aid in solving complex problems (Anderson, Gentile & Buckley, 2007). That notwithstanding, video games in general have always been associated with addiction as children and teenagers are perceived to be ...Download file to see next pagesRead More
Share:
Tags
Cite this document
(“Research paper( Violent Games Are Contaminating Childrens Paper”, n.d.)
Research paper( Violent Games Are Contaminating Childrens Paper. Retrieved from https://studentshare.org/english/1665205-research-paper-violent-games-are-contaminating-childrens-personalities

.... If video game promoted violence, then the media particularly violent movies and TV programs should also be banned since the also promote violence. Thus, video games are not a major risk factor or contributor of aggressive behaviour among children. Although both children and have equal frequency in playing video games, children are always at a greater risk of developing aggressive behaviour than adults (Ferguson 175). Video game addiction is a major problem among children and hence the concern. In addition, research has proved that video game addiction is more common among boys than it is among girls of equal age. It is evident that children tend to believe in actions of senior people in the society. This is the main difference between...
11 Pages(2750 words)Research Paper

However, what matters most is the thought that this can have significant impact on the child’s perspective about the reality. This has important impact on how the child will significantly understand the right from wrong set by the society. As stated earlier, those children exposed to violent games have the tendency to acquire violent behavior. This makes sense because in the first place, the bottom line impact of online violent games is said to be highly associated with children’s violent behavior. In order to understand this further, it is important to understand children’s behavior and his environment in detail. Children’s behavior and environmental influence Children’s behavior is susceptible to various influences in the enviro...
7 Pages(1750 words)Essay

... this video game is extremely violent and bloody. The third violent game is the “God of War” in this game the player kills every creature that comes his or her way. “Shadows of the Damned” is another violent game which involves demon hunters in this game there is a lot of sex jokes and intense profanity. The demons in this game engage in self mutilation they pull out and eat their own beating hearts. With this information on violent games, the essay, argumentatively shows how violent video games can negatively affect young children who play them. Research has shown that, many young people especially adolescent spend most of their time playing video games. Recent research shows that, girls spend approximately 5 hours playing video games...
13 Pages(3250 words)Essay

.... Research indicates that cognitive ability of the young people improves as they engage their mental and physical efforts towards achieving specific goals. Language development is equally derived partially from the communication experienced by the players of such violence video games. Tactics of winning requires repeated trials by the young players and this boosts their overall learning process. The increasing exposure of the young children to such violence video games has several disadvantages to the society at large. The content of the violence video games includes uncensored sexual acts which intoxicates the children’s morals and may affect their overall productivity in the society. There is an observed increase in childhood aggression...
3 Pages(750 words)Essay

...Research on Violent Video-Computer Games Heads On Towards a Better Understanding of Violence on Children and Young People Introduction The debate about the effects of violent video-computer games over children and young people has been quite meaningful and productive in terms of arriving at valuable conclusions that have surfaced along the way, especially after an extensive amount of quality research. Pros and cons come and go. Economic, political, and scientific issues abound. In spite of all the shortcomings and all the nuances arising from the conflicts of interests, scientific research is going through the right direction. Little by little research is validating the common sense understanding that violent video-computer games...
3 Pages(750 words)Essay

... al. studied the effects of playing violent video games on participants’ responses to vignettes, or fictional stories that contain violence. The vignettes included empathy and aggression stories. Empathy refers to “self-conscious” emotions when making moral judgments (Funk et al. 417). It is about being able to feel for someone in a different situation and responding properly to that person because of empathy (Funk et al. 417). The study of Funk et al. included 35 students with ages ranging eight to twelve years old. They surveyed the video game playing habits of these children. Then, they were made to play one or two violent video games, and then asked to respond to vignettes on empathy and aggression. To increase identification...
5 Pages(1250 words)Research Paper

There are numerous games in the market which thrive on skin show and this is immoral beyond imagination, games like SIMS and playboy have taken nudity to a different level altogether, their USP is nothing but skin show, several children play such games and commit crimes beyond imagination. Watching nude images is considered immoral in our society and playing such games is also immoral and should be stopped by every parent. Gaming consoles like Xbox, PS3, and others have become very popular these days and there is a huge demand for games like Hitman, Max Payne etc. Such games have a very negative impact on the mindset of the young children who play such games. The fictitious events are often considered reality by innocent c...

... in order to compete effectively. Disadvantages According to research, violent video games do cause addiction to children. The report claims that most children spent more than half their time playing these games, thus ignoring other crucial duties. In some cases, addiction causes aggressiveness and violence in children (Dietz 25-32). In one particular incident, a boy killed his both parents out of addiction to a violent game. The parents had placed a ban on the boy from using the game due to its violent nature. The father then proceeded to hide it together with his gun, since he thought the boy would not access them. However, the boy slicked out of his bedroom through his window and retrieved them. He then proceeded to shoot the parents...
6 Pages(1500 words)Term Paper
sponsored ads
Save Your Time for More Important Things
Let us write or edit the research paper on your topic "Research paper( Violent Games Are Contaminating Childrens Personalities)" with a personal 20% discount.
GRAB THE BEST PAPER

Let us find you another Research Paper on topic Research paper( Violent Games Are Contaminating Childrens Personalities) for FREE!