Comments (0)
Add to wishlistDelete from wishlist
Cite this document
Summary
Harlem Renaissance (1918 – 1937) is known as “a blossoming of African American culture and the most influential movement in African American literary history”, which “sought to reconceptualize “the Negro” apart from the white stereotypes” and “break free of moral…
Download full paperFile format: .doc, available for editing
HIDE THIS PAPERGRAB THE BEST PAPER94.1% of users find it useful 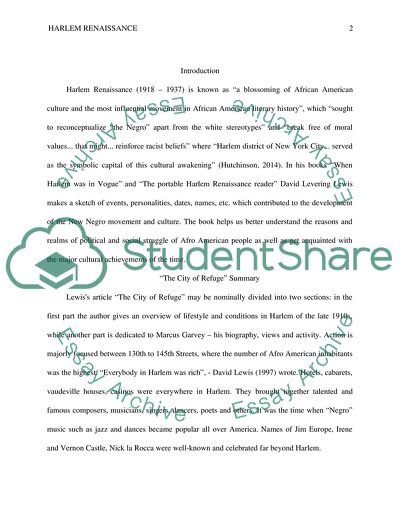 Introduction Harlem Renaissance (1918 – 1937) is known as “a blossoming of African American culture and the most influential movement in African American literary history”, which “sought to reconceptualize “the Negro” apart from the white stereotypes” and “break free of moral values... that might... reinforce racist beliefs” where “Harlem district of New York City... served as the symbolic capital of this cultural awakening” (Hutchinson, 2014). In his books “When Harlem was in Vogue” and “The portable Harlem Renaissance reader” David Levering Lewis makes a sketch of events, personalities, dates, names, etc. which contributed to the development of the New Negro movement and culture. The book helps us better understand the reasons and realms of political and social struggle of Afro American people as well as get acquainted with the major cultural achievements of the time.
“The City of Refuge” Summary
Lewiss article “The City of Refuge” may be nominally divided into two sections: in the first part the author gives an overview of lifestyle and conditions in Harlem of the late 1910s, while another part is dedicated to Marcus Garvey – his biography, views and activity. Action is majorly focused between 130th to 145th Streets, where the number of Afro American inhabitants was the highest. “Everybody in Harlem was rich”, - David Lewis (1997) wrote. Hotels, cabarets, vaudeville houses, casinos were everywhere in Harlem. They brought together talented and famous composers, musicians, singers, dancers, poets and others. It was the time when “Negro” music such as jazz and dances became popular all over America. Names of Jim Europe, Irene and Vernon Castle, Nick la Rocca were well-known and celebrated far beyond Harlem.
At the same time, Harlem was a “forum for serious racial palaver” (Lewis, 1997), where the views of Marcus Garvey were hears for the first time. Bearing pan-African ideas, he stayed for the recognition of African nationality, proclaimed the necessity of creating the country of New Africa that would be a motherland for Negros all over the world, defended ethnic identity and equal rights with “whites” of “black” people.
“Stars” Summary
Another Lewiss article “Stars” outlines lives and works of four outstanding poets of Harlem Renaissance: Claude McKay, Jean Toomer, Langston Hughes, Countee Cullen. In their poems and ballads, authors strove to “promote racial advancement through artistic creativity” (Lewis, 1997) and showed that “black” poetry can be not least worthy than non-blacks. These poets laid foundations of modern Afro American literature.
“The New Negro” Summary
In the article “The New Negro” Alain Locke refers to Harlem as a place where two significant Negro “movements” were concentrated: “One is the consciousness of acting as the advance-guard of the African peoples in their contact with Twentieth Century civilization; the other, the sense of a mission of rehabilitating the race in world esteem from that loss of prestige...” (Lewis, 1994).
Locke highlighted the crucial meaning of “artistic endowments and cultural contributions” (Lewis, 1994) for the promotion and acknowledgment of Afro Americans in the key of equality.
Thus, in his books, David Levering Lewis presented vivid and detailed reflection of a particular epoch – Harlem Renaissance – revolutionary period in the history of Afro American (and African) ethnicity. Lewiss book create an atmosphere of 1920s in the present day so the one can not only read but also feel and imagine how events occurred that time. Besides being an interesting and exciting literary work, David Lewiss books are also a useful source of dates, names, situations and information about the history of Afro Americans and America as a whole.
References
Hutchinson, G. (2014). Harlem Renaissance. Encyclopedia Britannica. Retrieved from http://www.britannica.com/EBchecked/topic/255397/Harlem-Renaissance
Lewis, D. L. (1994). The Portable Harlem Renaissance Reader. Penguin Books USA Inc., Viking Penguin, pp. 46-51.
Lewis, D. L. (1997). When Harlem Was in Vogue. Penguin Books, pp. 24-88. Read More
Share:
Tags
Cite this document
(“Summary Essay Example | Topics and Well Written Essays - 500 words - 122”, n.d.)
Retrieved de https://studentshare.org/english/1657715-summary

...Summary Content-Based Instruction Can Make ESL Teaching More Efficient in Korea One of the sources used for this essay (Met, 1991) makes an analogy between English study and learning how to play a musical instrument to demonstrate the chancy character of ESL instruction through the common practice of concentrating the lessons on grammar. The language-focused ESL class is compared to a music class that confines its studies to the mastery of musical keys, scales and notes. No meaningful results can be expected from this instructional method if the music students do not get their hands on the musical instrument of their choice and actually play it on a regular basis until they do it right. In the same manner, ESL students...
2 Pages(500 words)Essay
sponsored ads
Save Your Time for More Important Things
Let us write or edit the essay on your topic "Summary" with a personal 20% discount.
GRAB THE BEST PAPER

Let us find you another Essay on topic Summary for FREE!