History and the law - Essay Example 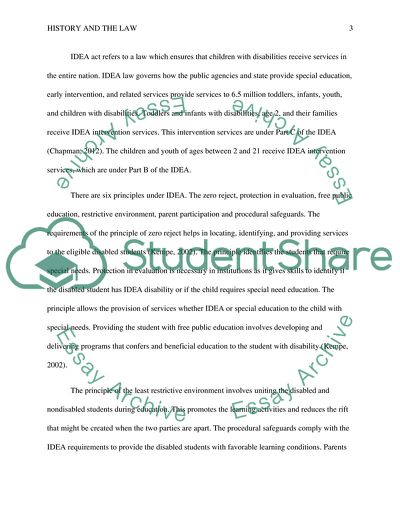 Extract of sample "History and the law"

History and the Law Special education refers to the education that with special needs receive. Special education addresses the needs and individual differences of students with exceptional needs. The education process involves the systematically monitored and individually planned arrangements of accessible settings, teaching procedures, adapted materials and equipment, and interventions that are designed to assist individual needs learners achieve success in the school and the community. The education allows the student gain a high personal sufficiency that gives the students access to a classroom education (Perry, 2012).
In America, the history of exceptional began right after the World War II. A group of parents came together to organize advocacy groups. American Association of Mental Deficiency was the first special education group that the advocacy groups started. The organization held its initial convention in 1947. In 1950, the Civil Rights Movement fueled the formation of several parent organizations. The parent organization included the Muscular Dystrophy Association, the United Cerebral Palsy Association, and J.F Kennedy’s Panel on mental Retardation (Kempe, 2002).
The year 1960 saw the increasing of special education facilities. Children with special needs could access many schools at the local and state levels. The history of special education evokes a feeling that there exists a need for the education of children with special needs. Everyone is equal and deserves equal opportunities. The introduction of the special schools help students and the entire community realize the rights and needs of the special children (Chapman, 2012).
IDEA act refers to a law which ensures that children with disabilities receive services in the entire nation. IDEA law governs how the public agencies and state provide special education, early intervention, and related services provide services to 6.5 million toddlers, infants, youth, and children with disabilities. Toddlers and infants with disabilities, age 2, and their families receive IDEA intervention services. This intervention services are under Part C of the IDEA (Chapman, 2012). The children and youth of ages between 2 and 21 receive IDEA intervention services, which are under Part B of the IDEA.
There are six principles under IDEA. The zero reject, protection in evaluation, free public education, restrictive environment, parent participation and procedural safeguards. The requirements of the principle of zero reject helps in locating, identifying, and providing services to the eligible disabled students (Kempe, 2002). The principle identifies the students that require special needs. Protection in evaluation is necessary in institutions as it gives skills to identify if the disabled student has IDEA disability or if the child requires special need education. The principle allows the provision of services whether IDEA or special education to the child with special needs. Providing the student with free public education involves developing and delivering programs that confers and beneficial education to the student with disability (Kempe, 2002).
The principle of the least restrictive environment involves uniting the disabled and nondisabled students during education. This promotes the learning activities and reduces the rift that might be created when the two parties are apart. The procedural safeguards comply with the IDEA requirements to provide the disabled students with favorable learning conditions. Parents are actively required to participate in the growth and the development phases of children with disabilities (Perry, 2012). The parents collaborate with the teachers and society to deliver special programs to the child with a disability. These principles reflect the support and involvement of the entire society in providing the disabled child with special education that caters for their needs. The principles allow the rights of education of the child to be checked and delivered appropriately to fit the needs and requirement of the child. The principles reflect the history of special education in that the society controls and delivers the programs that are designed for the benefit of the child. The formation of organizations that support the education of the special child shows that the society is encouraging programs that support the needs of the child with special needs (Perry, 2012).
Section 504 of the American Constitution of the disability act prohibits any individual discriminating basing on disability of the individual. The 504 section prohibits receiving of federal funds so that they do not discriminate any person with a disability. The law and regulation might affect a teacher if they receive federal funds on the basis of discriminating of disabled students. The teacher might face the laws on discriminating against disabled students (Chapman, 2012).
References
Chapman, W. (2012). The Need for Special Need Education. Together we Stand, 12-15.
Kempe, A. (2002). Drama Education & Special Needs: Teachers in Mainstream and Special Schools. New York: Nelson Thornes.
Perry, J. (2012, February 19). The IDEA Laws and Regulations. Retrieved March 1, 2013, from The IDEA Laws and Regulations Web site: www.idealaws.com Read More
Share:
Tags
Cite this document
(“History and the law Essay Example | Topics and Well Written Essays - 500 words”, n.d.)
History and the law Essay Example | Topics and Well Written Essays - 500 words. Retrieved from https://studentshare.org/education/1616605-history-and-the-law

CHECK THESE SAMPLES OF History and the law

The Democratic Party has been the oldest political party in the United States. Founded by Thomas Jefferson in the late eighteenth century, the party was particularly strong in the South with an ideology that opposes the interests of business and the North. It was severely damaged in the aftermath of the Civil War. It was Franklin Delano Roosevelt who ushered in a revival of the Democratic Party during his presidency. This period came to be known as the New Deal for Democratic Party as it gained enormous strength with its ideology appealing to the labor union members, minority groups and middle-income people. Since then, it has successfully established itself as the opposition to the right-leaning Republicans, with its liberal phil...
6 Pages(1500 words)Case Study

The inception of Heinz began in Pennsylvania during the industrial revolution by Henry Heinz. He built his business practices from his parents with their pickling and sauerkraut services. By the early 1900s, Heinz was a growing corporation, specifically in response to the current situation with the Great Depression. The products offered included not only basic picking, but als...

Justine could either claim under “like work,” “work rated as equivalent,” or “work of equal value.” A claim under the “like work” provision of the Equal Pay Act 1970 is laid down in s 1(2...
9 Pages(2250 words)Case Study
sponsored ads
Save Your Time for More Important Things
Let us write or edit the essay on your topic "History and the law" with a personal 20% discount.
GRAB THE BEST PAPER

Let us find you another Essay on topic History and the law for FREE!