Make a summery for this Interview Questions and Answers - Essay Example

Comments (0)
Add to wishlistDelete from wishlist
Cite this document
Summary
Verna Azore has been serving at the Austin Middle School as an Administrator for 16 years. Azore’s interview was based on questions related to three areas of management; master schedule management, budget management, and facilities management. This paper is a summary of…
Download full paperFile format: .doc, available for editing
HIDE THIS PAPERGRAB THE BEST PAPER93.5% of users find it useful 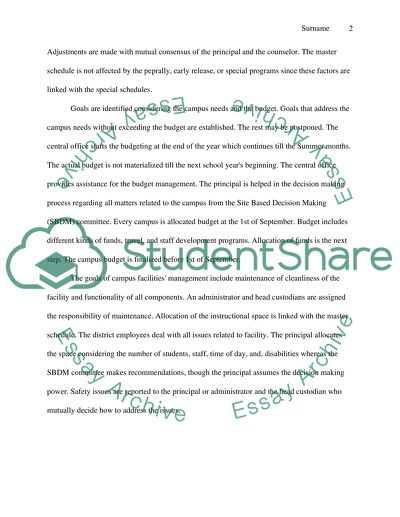 05 October Interview Summary Mr. Verna Azore has been serving at the Austin Middle School as an Administrator for 16 years. Azore’s interview was based on questions related to three areas of management; master schedule management, budget management, and facilities management. This paper is a summary of her views and opinions. According to Azore, good communication skills and a strong work ethic are the leadership skills needed to be a successful principal.
Master schedule is prepared in the late Spring and needs to be free of conflicts. It should be prepared considering the students needs rather than the personal preferences of the teacher. The district provides a computer program called TEAMS for scheduling. The principal and the counselor mutually develop the master schedule. Different campuses take different durations to complete the master schedule. Sometimes, it is completed by the eend of the school year, but some campuses complete it a week before the students arrival on campus. Variables that influence the development of master schedule primarily include courses that can only be offered once and the teachers schedules. Such courses should not be offered simultaneously. The master schedule is finally approved by the guidance office and the principal. Factors involved in the development of master schedule when arranged in the order of decreasing importance are these; labs and specialized need courses, personnel allocations, facilities, time, and extra-curricular activities. Adjustments in the master schedule are made according to the needs of the students. Adjustments are made with mutual consensus of the principal and the counselor. The master schedule is not affected by the peprally, early release, or special programs since these factors are linked with the special schedules.
Goals are identified considering the campus needs and the budget. Goals that address the campus needs without exceeding the budget are established. The rest may be postponed. The central office starts the budgeting at the end of the year which continues till the Summer months. The actual budget is not materialized till the next school years beginning. The central office provides assistance for the budget management. The principal is helped in the decision making process regarding all matters related to the campus from the Site Based Decision Making (SBDM) committee. Every campus is allocated budget at the 1st of September. Budget includes different kinds of funds, travel, and staff development programs. Allocation of funds is the next step. The campus budget is finalized before 1st of September.
The goals of campus facilities management include maintenance of cleanliness of the facility and functionality of all components. An administrator and head custodians are assigned the responsibility of maintenance. Allocation of the instructional space is linked with the master schedule. The district employees deal with all issues related to facility. The principal allocates the space considering the number of students, staff, time of day, and, disabilities whereas the SBDM committee makes recommendations, though the principal assumes the decision making power. Safety issues are reported to the principal or administrator and the head custodian who mutually decide how to address the issues. Read More
Share:
Tags
Cite this document
(“Make a summery for this Interview Questions and Answers Essay”, n.d.)
Retrieved from https://studentshare.org/education/1604557-make-a-summery-for-this-interview-questions-and-answers

(Make a Summery for This Interview Questions and Answers Essay)
https://studentshare.org/education/1604557-make-a-summery-for-this-interview-questions-and-answers.

“Make a Summery for This Interview Questions and Answers Essay”, n.d. https://studentshare.org/education/1604557-make-a-summery-for-this-interview-questions-and-answers.
Comments (0)
Click to create a comment or rate a document

... Questions and Answers Question They all emphasize, on the need for architecture, to portray beauty. Wotton refersto it as “delight’ Schinkel urges the use of architecture to make something beautiful, Sullivan contends that form must always follow function, while Vitruvius plumps for work that is in a good state, pleasing, and symmetrical. Saint Exupery shares these values as he compares an architect to a poet, who corrects his poem after writing it until it is beautiful. Question # 2 Their ideas are still relevant to date and continue to shape architecture. Architectural efforts, calculations, and computations are all meant to culminate in producing structures whose principle is to achieve simplicity and beauty. However, Saint Exupery’s...
1 Pages(250 words)Essay

... are excellent time management and organized person. Every time I am working on a project, I always make sure to complete the project well ahead of schedule. Q.4 I developed a unique set of skills that make me suited for this job while in college. Firstly, I learned presentation skills. Secondly, I learned how to develop the ability of questioning and evaluating information. Thirdly, I learned to pay attention to detail elements of any performance. Q.5 In my final year, we were given an accounting project to solve within a week. The task involved researching on the tax policy in the country and its impact on small businesses. I started working on the project from the first day. The move ensured that I did not have a problem in meeting...
2 Pages(500 words)Essay

I was eager to face challenging situations and resolve problems to the clients’ satisfaction. In one such situation, a client arrived in a hurry for a meeting. He introduced himself as X, a large-scale exporter of petroleum products from the United Kingdom. He wished to discuss and finalize a mutually beneficial contract related to the regular, wholesale purch...
8 Pages(2000 words)Assignment
sponsored ads
Save Your Time for More Important Things
Let us write or edit the essay on your topic "Make a summery for this Interview Questions and Answers" with a personal 20% discount.
GRAB THE BEST PAPER

Let us find you another Essay on topic Make a summery for this Interview Questions and Answers for FREE!