Comments (0)
Add to wishlistDelete from wishlist
Cite this document
Summary
The paper "Language and Literacy Development and Exploring Games" states that Pipe Marble Game comprises of medium five cut pipes approximately having a diameter of 15 cm while the marbles are smaller probably of 8 cm in diameter. Mainly, this is an outdoor game…
Download full paperFile format: .doc, available for editing
HIDE THIS PAPERGRAB THE BEST PAPER98.2% of users find it useful 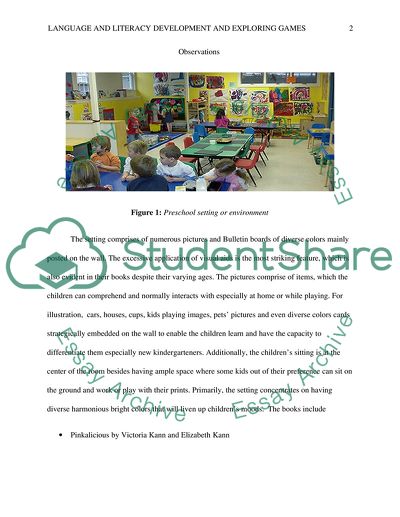 Extract of sample "Language and Literacy Development and Exploring Games"

The setting comprises of numerous pictures and Bulletin boards of diverse colors mainly posted on the wall. The excessive application of visual aids is the most striking feature, which is also evident in their books despite their varying ages. The pictures comprise of items, which the children can comprehend and normally interacts with especially at home or while playing. For illustration, cars, houses, cups, kids playing images, pets’ pictures and even diverse colors cards strategically embedded in the wall to enable the children to learn and have the capacity to differentiate them especially new kindergarteners. Additionally, the children’s sitting is at the center of the room besides having ample space where some kids out of their preference can sit on the ground and work or play with their prints. Primarily, the setting concentrates on having diverse harmonious bright colors that will liven up children’s moods. The books include
Pinkalicious by Victoria Kann and Elizabeth Kann
It is a picture book about Pinkalicious girl, who really loves pink color where regardless of numerous warnings by her parents not to eat too many pink cakes declines and eventually turns pink. The book mainly authored for new kindergarteners who have joined preschool.
1. If You Give a Mouse a Cookie by Laura Numeroff
It is a humorous story regarding a demanding stranger (mouse) who after the host offers him cookie asks for milk, even a mirror, and a pair of scissors to make his mustache neat
2. The Rainbow Fish by Marcus Pfister Herbert
This is a moral storybook concerning a fish, which learns the essence and value of being generous.
3. The Giving Tree by Shel Silverstein
The tree assumes the position of a provider to the young boy since his tender age until when the boy came of age with numerous increasing demands, but the tree does not give up on the boy.
4. Five Little Kittens by Nancy Jewell
This comprises a cat’s family story life coupled with the duties they normally undertake every day prior to the family concludes their day.
5. Hens Say Cluck  by Hannah Gifford
It is about sounds made by hens, pig, and other farm animals, which enables the children to master them.
A.
1. Floating Fish Toy (Commercial game)
This is a battery-operated board having slots that contain fish in them and normally opening their mouths at the interval but not at the same time. The board spins in a moderate speed to allow the kid(s) to fish and remove them once they have bit one’s plastic bate, mainly hooked on the fishing line. The entire board’s body may be circular or made in the shape of a fish and produces water sounds similar to that of a running river.
2. Circular Board having diverse colored sectors (Homemade game)
This is a circular, moderate revolving board comprising of diverse colored sectors (probably 8) where at their edges it has slots. The player normally has a small hand cue, where one tries to pin the sector having the color of choice.
The game normally aids in enabling the preschool child’s mental capacity to master and increase their concentration while trying to keep up with the moderate revolving speed. Supplementary activities meant for a classroom to enhance their concentration and mental include matching games (letter, pictures or color matching).
B.
1. Shoot-out game (Commercial game)
Primarily, this game entails using a propelling pipe like gadget to through small plastic balls into the three plates, probably placed about 1 to 2 meters away. The child normally erects the propelling pipe like a canon and then tries to throw the balls into the plates, which are 3 to 4 in number and act as a target.
Figure 2: Shoot-out game
C.
1. Connect 4 games (Commercial game)
Primarily, this is a competitive game involving two players each having the same number of tops but diverse colors. Each player tries to connect a line of four tops mainly; diagonal, vertical or horizontal as depicted in Fig. 2, coupled with disrupting the opponent’s intended moves to win the game.
Figure 3: Connect 4 game, Retrieved from http://www.zodiac-games.com/games-puzzle-10.html
2. Homemade connect 4
This involves three players where instead of a standalone grid similar to that in Fig 2, the players draw the grid mainly on the ground or on cardboard beside each having distinct colored tops.
The game increases a child’s creativity besides brain development, where an individual tries to find any possible way of winning the opponent(s) besides disrupting any move that will eliminate one from the game. Supplementary activities in school that will enhance this creativity entail involving the child in mental tasks like simple house block constructions. Here, the child tries to utilize diverse provided blocks to produce new model house outlooks each time, which through encouragement it develops even in upper grades. Read More
Share:
Tags
Cite this document
(Language and Literacy Development and Exploring Games Assignment, n.d.)
Language and Literacy Development and Exploring Games Assignment. Retrieved from https://studentshare.org/education/1598665-language-and-literacy-development-and-exploring-games
(Language and Literacy Development and Exploring Games Assignment)
Language and Literacy Development and Exploring Games Assignment. https://studentshare.org/education/1598665-language-and-literacy-development-and-exploring-games.
“Language and Literacy Development and Exploring Games Assignment”, n.d. https://studentshare.org/education/1598665-language-and-literacy-development-and-exploring-games.
Comments (0)
Click to create a comment or rate a document

CHECK THESE SAMPLES OF Language and Literacy Development and Exploring Games

... Literacy narrative- language and understanding Introduction Language plays a pivotal role in almost every aspect of human life. Whether one is business man or a taxi driver, communication and understanding of one another’s point of view are conveyed with the use of language. It is the use and understanding of language that have really shaped the entire human life structure into a stable pattern. This pattern supports in a variety of way. For instance, imagine this world filled with the current number of people living globally but without any language between or among them. Right after this thought, one would question the existence of humans on the face of the earth. Life is only sustained with the presence and use of language... . And, it is...
4 Pages(1000 words)Essay

...?Language and Literacy Programs There is a significant difference between whole language programs and skills/objectives-based reading programs. The main distinguishing factor in these regards is that whole language programs proceed from a belief that language is most effectively learned by teaching an entire world. Whole word programs necessitate that students distinguish the meaning of words based on context (Coles, p. 113). This is contrasted from skills or objects based approaches as these approaches engage in language instruction through phonemes. This approach considers that learners are best capable of determining the meaning of...
4 Pages(1000 words)Essay

... nothing in the Spanish language, for Croatian speakers, it means 'hope' (Hudson, 2000). Through the course of this essay, I shall attempt a discourse of the various social factors that come into play in language, within the context of literacy development. In this regard, three students currently undertaking a basic skills "Brush Up Your English" course at Halton College will be used as case studies. After a brief analysis of what has been said and researched on the impact of social factors on language development, I will give a brief account of the backgrounds of the three students in this group, before examining how the duo of region/geography and gender (two main social factors) have affected language development and literacy... ...
12 Pages(3000 words)Essay

Language and Literacy in Children

...Running Head: LANGUAGE AND LITERACY IN CHILDREN Language and Literacy in Children with respect to Cultural practices By _____________________ Introduction Literacy in traditional way is considered as a means to possess the ability to read and write, however this is not always the case as it is an individual process perceived by each child according to his/her mental capability to develop psychological and linguistic elements critical to the acts of reading and writing, such as constructing meaning and developing sound-to-letter correspondence. Literacy when defined more broadly is viewed as a social phenomenon, which varies according to different perceptions of socio-cultural groups. The term literacy when converted... that there...
12 Pages(3000 words)Assignment

Language and Literacy in America

...real value in literacy and implemented different methods to improve the educational standard of the children. This is an attempt to explore whether oracy with literacy can bring notable changes in educational field. In order to make it clear, the researcher goes through the stories of the popular writers like Katie Morag and so on. It is very clear and generally accepted fact that the two processes, that is, language for learning and language for thinking are overtly related with oracy development. Studies prove that social interaction plays a vital role in a child’s language acquisition. The primary stage in the...
5 Pages(1250 words)Essay

...Language and Literacy Malcolm X, Gloria Anzaldúa, and Barbara Mellix in their writings express their understanding ofthe significance and power of language. They explain how language facilitates and strengthens an individual’s identity and helps one view himself or herself in a new way. In her essay, Gloria describes how Latinas and Latinos accused her of mutilating Spanish when she spoke Chicano Spanish. She felt that, speaking in English or Spanish, she could not connect to her true identity. However, speaking in Chicano Spanish, “a language that was neither English or Spanish, but both, she was able to connect to her true identity, and communicating...
4 Pages(1000 words)Essay

...Language development& early literacy in multilingual context LANGUAGE DEVELOPMENT AND EARLY LITERACY IN MULTILINGUAL CONTEXT Introduction Early childhood language development and literacy plays a vital role in the academic and career success of an individual (Philp, Oliver and Mackey 2008). Though learning to read and write is a lifelong process, the concepts acquired at an early age are very fundamental to an individual and determine to a large extend the ease with which an individual learns adulthood literacy. The concepts learned and the skills acquired at such ages...
12 Pages(3000 words)Essay
sponsored ads
Save Your Time for More Important Things
Let us write or edit the assignment on your topic "Language and Literacy Development and Exploring Games" with a personal 20% discount.
GRAB THE BEST PAPER

Let us find you another Assignment on topic Language and Literacy Development and Exploring Games for FREE!