Comments (0)
Add to wishlistDelete from wishlist
Cite this document
Summary
Having the thought that people from different walks of life suffer unimaginable illnesses makes a cold shiver run down my spine. As a result, I have always wanted to offer some sort of therapy to those who…
Download full paperFile format: .doc, available for editing
HIDE THIS PAPERGRAB THE BEST PAPER93.3% of users find it useful 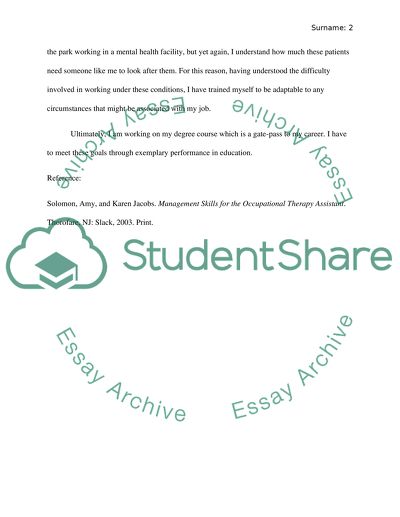 Education Making a difference in the lives of people has always been my passion. Having the thought that people from different walks of life suffer unimaginable illnesses makes a cold shiver run down my spine. As a result, I have always wanted to offer some sort of therapy to those who undergo such pains. After a long calculation of thoughts, I made up my mind to become an Occupational Therapist Assistant. The fact that I have a child suffering from downs syndrome fueled my decision.
This is because being close to him has helped me a lot in realizing how much passion I have in helping others get better health-wise. The decision I made has been coupled by a lot of adjustments I have to make in my life so as to be the perfect person I want to be. Being that my occupation involves interaction with people of different ages, I am learning how to handle the old and young patients who might be put under my care. The old need special treatment as well as the young.
Since the work as an occupational therapist assistant may mean working in hospitals, outpatient clinics, schools, rehabilitation centers, nursing homes and even mental health facilities, I am currently adapting to different lives and different people. I know it is not a walk in the park working in a mental health facility, but yet again, I understand how much these patients need someone like me to look after them. For this reason, having understood the difficulty involved in working under these conditions, I have trained myself to be adaptable to any circumstances that might be associated with my job.
Ultimately, I am working on my degree course which is a gate-pass to my career. I have to meet these goals through exemplary performance in education.
Reference:
Solomon, Amy, and Karen Jacobs. Management Skills for the Occupational Therapy Assistant. Thorofare, NJ: Slack, 2003. Print. Read More
Share:
Tags
Cite this document
(“Occupational Therapy Assistant Essay Example | Topics and Well Written Essays - 250 words”, n.d.)
Retrieved from https://studentshare.org/education/1597084-occupational-therapy-assistant

...Cognitive Behavior Therapy Cognitive Behavior Therapy views human nature as full of innate potentials and flaws. suffering from psychological problems are assumed to focus more on their flaws that pull them down than on their potentials that may spur them up to success. The basic premise of Cognitive Behavior Therapy is the clients’ erratic or exaggerated beliefs that it is their fault why they came to such a dreadful state. The goal of therapy is to help the client realize that reorganizing the way they view situations will call for a corresponding reorganization in behavior – sort of marrying the concepts of “mind over matter” and “self-fulfilling prophecy”. As an example, a recovering alcoholic will think that he has mustered enough...
7 Pages(1750 words)Essay

The etiology of OA is multi factorial, with inflammatory, metabolic, and mechanical causes. A number of environmental risk factors, such as obesity, occupation, and tr...
11 Pages(2750 words)Literature review

Art therapy started as a form of therapy in the late 1930s when children’s drawings were used for psychological assessments. Human figure drawings became more and more used in the 1940s to assess and diagnose children with neurotic and conduct disorders. To this day children’s drawings are used to an extent as part of the diagnostic assessment.

Generally, the process involves the child completing a piece of art with the therapist providing the materials and encouragement. The child tells the story of the artwork as the session proceeds. The therapist helps to interpret the story. The healing takes place as according to Eaton et al, “ As the story unfolds, fantasy and reality are teased apart, leading...
12 Pages(3000 words)Research Paper

This is similar to findings yielded by other researchers indicating that music therapy alone is insufficiently therapeutic for elderly dementia patients without a component of familiarity. In order to find the most beneficial musical scores, historical and cultural sensitivity is necessary. (Ip-Winfield and Grocke, 2011), (Cooke et al. 2010) Music may be associated with other culturally relevant activities, such as a folk dance. Non-Western audiences may derive limited benefit from music without the associated cultural trappings. (Ip-Winfield and Grocke, 2011) The underlying principle is the issue of familiarity, music is a vehicle for stress reduction in a new environment, and in some cases, the vehicle requires some bonus featur...
10 Pages(2500 words)Term Paper

Occupational Marine Safety and Health Management in the USA

The US Marine Corps ORM manual highlights the processes and steps that must be adhered to, for the maintenance of quality service and safety. The nature of militants’ operations, particularly combat operations, is quite complex, demanding and involves a lot of risks. In order to operate effectively, the ORM manual has integrated two important aspects: safety and risk management, in decision making. This helps the leaders and commanders to strategically plan and execute their daily missions. The ORM enables US Marine Corps to discharge their duty, with minimal losses and in a timely manner. Therefore, ORM has proven to be an invaluable tool for the U.S Marine Corps operations.
The Oxford Learners Dictionary defines risk...
33 Pages(8250 words)Research Proposal

These other therapies may include the extreme behavioral therapies that are used for purposes of changing the behavior of the clients (Law, 1998). Roemer and Orsillo (2009) explain what this concept of eating disorders is. In their view, eating disorders are behavioral eating habits of an individual, which is driven by the fear of becoming too fat (Dobson, 2001). These activities or behavior involves a situation whereby an individual eats too much, or too little (Hughes, 2010). Furthermore, it may involve a situation whereby an individual uses harmful methods, for purposes of removing calories from his or her body.
Casemore and Tudway (2012) explain that some of the most notable eating disorder, that can be treated by the us...
7 Pages(1750 words)Assignment
sponsored ads
Save Your Time for More Important Things
Let us write or edit the essay on your topic "Occupational Therapy Assistant" with a personal 20% discount.
GRAB THE BEST PAPER

Let us find you another Essay on topic Occupational Therapy Assistant for FREE!