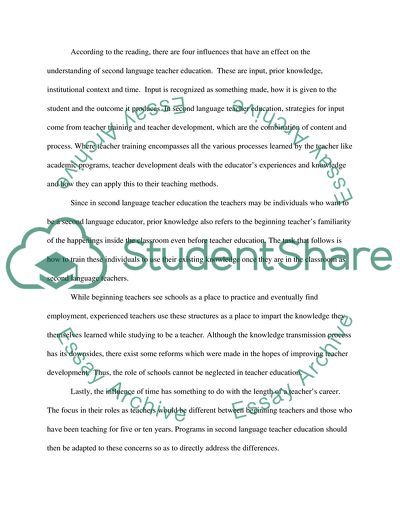 However, it may not necessarily enjoy the status of an official language. American English has evolved over centuries but it was after the American Revolution that distinct alterations were made to it to reflect national and political independence from the British. Noah Webster is regarded as the founding father of the American English who realized the need for standardization of the language and worth of linguistic identity (Language Translation Inc., 2006).
According to surveys, English is considered as the official language in fifty-one countries and in twenty-seven states of America. Statistics show that it is the mother language of 82% of the population in the United States of America and almost 96% can actually speak it...
6 Pages(1500 words)Essay
sponsored ads
Save Your Time for More Important Things
Let us write or edit the essay on your topic "Second language teacher education" with a personal 20% discount.
GRAB THE BEST PAPER

Let us find you another Essay on topic Second language teacher education for FREE!