Comments (0)
Add to wishlistDelete from wishlist
Cite this document
Summary
The researcher states that neglecting the course of English is one of the mistakes he made in his life. The author will present some reasons behind this overlooking, which according to the author’s perception should be informed to decide appropriately for his transfer to UCSD…
Download full paperFile format: .doc, available for editing
HIDE THIS PAPERGRAB THE BEST PAPER96.2% of users find it useful 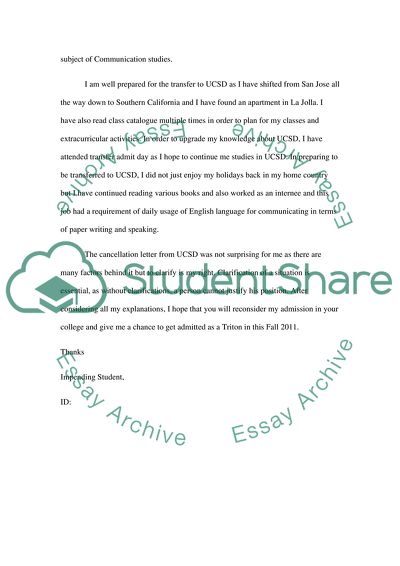 Extract of sample "Neglecting the Course of English"

Sir/Madam, Human beings are not perfect at all and no one can deny the fact that human beings make countless mistakes. Being a human being, I also made many mistakes in my life, out of which, one is neglecting the course of English 1B. However, there are some reasons behind this overlooking, which according to my perception should be informed to you so that you can decide appropriately for my transfer to UCSD.
In the last quarter, I took 24.5 units while I had a capacity to take below 20 units. However, I took this step as a challenge. For the class of English 1B, I opted for an online class that was suitable for my packed schedule. The mistake that I did unintentionally was late submission of a required essay, which is quite regretful for me. Due to failure to submit the essay in time, I did not receive a passing grade in the class due to which, I was unable to complete the requirements of my admission.
I feel really sorry that I was unable to manage my time according to my activities that were equally important. This failure taught me a lesson and I do not want this failure to prove as a dark spot on my transfer to UCSD. Being an international student, I try to do my best in my academics as well as other student activities prevalent in the educational institution. I am fully aware that acquisition of English language is compulsory for the students due to which, I have attended community college for 19 months for learning English language. I have gained proficiency at reading and writing English language and I feel that my transcript is not reflective of it. Nevertheless, I am prepared to retake the lower division or equivalent English writing course again in your college in order to meet the requirements of the missing units not as a junior but at a freshman/sophomore level. My overall percentage in different subjects is not bad, which is quite evident from my major subject of Communication studies.
I am well prepared for the transfer to UCSD as I have shifted from San Jose all the way down to Southern California and I have found an apartment in La Jolla. I have also read class catalogue multiple times in order to plan for my classes and extracurricular activities. In order to upgrade my knowledge about UCSD, I have attended transfer admit day as I hope to continue me studies in UCSD. In preparing to be transferred to UCSD, I did not just enjoy my holidays back in my home country but I have continued reading various books and also worked as an internee and this job had a requirement of daily usage of English language for communicating in terms of paper writing and speaking.
The cancellation letter from UCSD was not surprising for me as there are many factors behind it but to clarify is my right. Clarification of a situation is essential, as without clarifications, a person cannot justify his position. After considering all my explanations, I hope that you will reconsider my admission in your college and give me a chance to get admitted as a Triton in this Fall 2011.
Thanks
Impending Student,
ID: Read More
Share:
Tags
Cite this document
(“Neglecting the Course of English Essay Example | Topics and Well Written Essays - 500 words”, n.d.)
Neglecting the Course of English Essay Example | Topics and Well Written Essays - 500 words. Retrieved from https://studentshare.org/education/1579057-appeal-letter-to-college-editing-ideas

CHECK THESE SAMPLES OF Neglecting the Course of English

However, it may not necessarily enjoy the status of an official language. American English has evolved over centuries but it was after the American Revolution that distinct alterations were made to it to reflect national and political independence from the British. Noah Webster is regarded as the founding father of the American English who realized the need for standardization of the language and worth of linguistic identity (Language Translation Inc., 2006).
According to surveys, English is considered as the official language in fifty-one countries and in twenty-seven states of America. Statistics show that it is the mother language of 82% of the population in the United States of America and almost 96% can actually speak it...
6 Pages(1500 words)Essay
sponsored ads
Save Your Time for More Important Things
Let us write or edit the essay on your topic "Neglecting the Course of English" with a personal 20% discount.
GRAB THE BEST PAPER

Let us find you another Essay on topic Neglecting the Course of English for FREE!