Comments (0)
Add to wishlistDelete from wishlist
Cite this document
Summary
In the essay “Foreign Language Instruction” the author discusses the issue that foreign language instruction should begin in kindergarten because children at that age are already going through the learning process. Young children are curious and enjoy learning as much about the world as possible…
Download full paperFile format: .doc, available for editing
HIDE THIS PAPERGRAB THE BEST PAPER94.4% of users find it useful 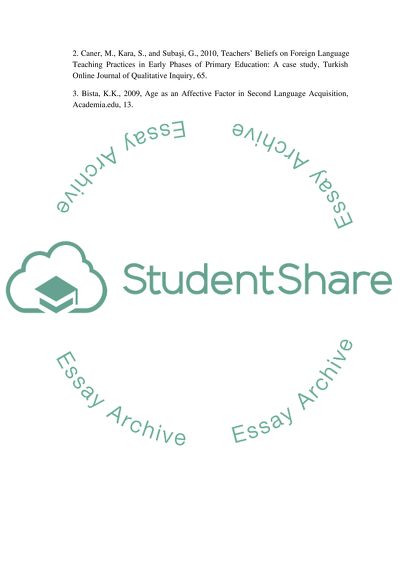 I. Foreign language instruction should begin in kindergarten. II. Foreign language instruction should begin in kindergarten because children at that age are already going through the learning process.
III.
1. Young children are naturally curious and enjoy learning as much about the world as possible.
I. “Long before we hear their much anticipated first words, children are invested in the task of developing language” (Puig, 2010, 2).
II. Before a child is even born, they are curious about the outside world. Young children like touch and suck things to gain an understanding of how life works. Children naturally enjoy making new discoveries about the world and gaining knowledge.
2. Language learning needs to be fun in order to have any effect on the individual who is learning a particular language.
I. “...teacher assists the child through modelling and natural language, rather than didactic lessons” (Caner, Kara, and Subaşi, 2010, 65).
II. Language learning can be boring for certain types of people and, as a result, the learning of a language needs to be fun and enjoyable. It is the natural tendency of kindergartners to play and act out what they want to say, as they are so young.
3. The earlier a child begins to learn a second language, the more they will be able to develop correct pronunciation and have the right accent.
I. “...young learners are considered fluent in communication of the second language and achieve [a] native like accent. [On the other hand, older learners are less likely to] acquire [a] native like accent of a second language” (Bista, 2009, 13).1
II. Younger learners of a language have a greater chance of learning the right way to speak. Older people may have better grammar skills, but if children are exposed to a language early in life, it is likely they will sound close to a native.
IV. 1. Puig, V.I., 2010, Are Early Intervention Services Placing Home Languages and Cultures “At Risk?” Early Childhood Research & Practice, 2.
2. Caner, M., Kara, S., and Subaşi, G., 2010, Teachers’ Beliefs on Foreign Language Teaching Practices in Early Phases of Primary Education: A case study, Turkish Online Journal of Qualitative Inquiry, 65.
3. Bista, K.K., 2009, Age as an Affective Factor in Second Language Acquisition, Academia.edu, 13. Read More
Share:
Tags
Cite this document
(“Foreign Language Instruction Essay Example | Topics and Well Written Essays - 250 words”, n.d.)
Foreign Language Instruction Essay Example | Topics and Well Written Essays - 250 words. Retrieved from https://studentshare.org/education/1577663-essay-outline

...?Reading ASSESSMENT OF READING AND LANGUAGE INSTRUCTION December 6, Introduction Reading at the first grade level is a time for the child to learn to read and read to learn. This is a very important time for it is a time for the children to learn about what makes a word. The children will learn that the letters they learned in earlier grades will form words and from the new words they learn will tell a story. To be more exact the children will learn word formation, word recognition skills through the use of Phonics and Literature. The children will continue to read pictures and to improve their basic comprehension skills. First Grade Observation In my observation of the first grade classroom the students’ desks were setup in groups of six...
10 Pages(2500 words)Research Paper

... the learner’s reaction towards learning the language (the reaction in this case is emotional) (Norris-Holt, 2001). Ways of Motivating From the research findings on the nature of motivation and the impact that it makes on the students’ learning perceptions, it is clear that there are clear aspects of motivation that define the ways from which it must be approached. Without a consideration of the specifics of motivation in defining a successful approach to assist foreign language student, it may not be possible to create the change of learning outcomes as expected in content based instruction approach. It is therefore important that the correct strategy to effect motivation in a foreign language classroom is adopted to attain the success...
8 Pages(2000 words)Research Paper

...﻿Language Difficulties Of Foreign Students Truth be told, it is a bit difficult for me to view myself as a writer because English is not my primary language. I am a native Spanish speaker so I find myself struggling to get my thoughts and ideas down on paper in English. Added to this problem is the fact that in Venezuela, where I hail from, the classes do not require the students to write any essays. While in the United States, essay writing is very important to the learning process of the student. Although I informed my teachers of my learning difficulties, they did not seem to care that I was struggling in class because of my lack of English language command. This led to a frustrating learning experience for me. While other students...
3 Pages(750 words)Essay

...﻿Teaching English as Foreign Language Introduction English as a second language for foreign students in English speaking countries has become essential primarily because it helps them to adjust in a foreign land. English has also become a global language and written and speaking proficiency in the language greatly facilitates the foreign students or immigrant to improve his or her social networking and thereby promote better understanding of the cross cultural values. Language is found to be the major barrier in the advancement of a foreign student or an immigrant. It is for these reasons that Teaching English to Speakers of Other Language (TESOL) and Teaching English as Foreign Language (TEFL) have increasingly become highly sought...
11 Pages(2750 words)Assignment

However, it may not necessarily enjoy the status of an official language. American English has evolved over centuries but it was after the American Revolution that distinct alterations were made to it to reflect national and political independence from the British. Noah Webster is regarded as the founding father of the American English who realized the need for standardization of the language and worth of linguistic identity (Language Translation Inc., 2006).
According to surveys, English is considered as the official language in fifty-one countries and in twenty-seven states of America. Statistics show that it is the mother language of 82% of the population in the United States of America and almost 96% can actually speak it...
6 Pages(1500 words)Essay
sponsored ads
Save Your Time for More Important Things
Let us write or edit the essay on your topic "Foreign Language Instruction" with a personal 20% discount.
GRAB THE BEST PAPER

Let us find you another Essay on topic Foreign Language Instruction for FREE!