Comments (0)
Add to wishlistDelete from wishlist
Cite this document
Summary
The essay aims to initially read the article entitled School Funding’s Tragic Flaws written by Kevin Carey and Marguerite Roza and to address the following concerns: to present a description of the article’s major points and questions; to discuss the main argument for education…
Download full paperFile format: .doc, available for editing
HIDE THIS PAPERGRAB THE BEST PAPER94.5% of users find it useful 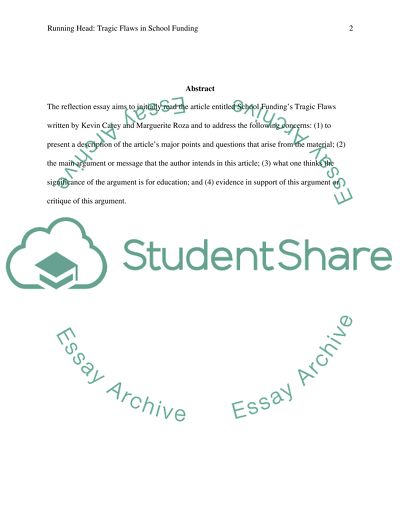 ﻿School Funding’s Tragic Flaws
Abstract
The reflection essay aims to initially read the article entitled School Funding’s Tragic Flaws written by Kevin Carey and Marguerite Roza and to address the following concerns: (1) to present a description of the article’s major points and questions that arise from the material; (2) the main argument or message that the author intends in this article; (3) what one thinks the significance of the argument is for education; and (4) evidence in support of this argument or critique of this argument.
School Funding’s Tragic Flaws
Description of Major Points and Questions
The article written by Carey and Roza (2008) proffered issues that reveal the disparities in the distribution and allocation of funds at the three levels of government agencies: federal, state and local. As averred, the authors indicate that “policymakers give more resources to students who have more resources, and less to those who have less” (Carey and Rosa, 2008, 1). The authors supported their contentions through a comparative analysis of funding distribution between two apparently similar schools when gauged through external appearances: the Cameron Elementary School in Fairfax County in Virginia and the Ponderosa Elementary School in Cumberland County, North Carolina. Further, a closer examination of policies from the federal, state and local agencies, reveal the culprits for the disparities. The authors finally presented viable recommendations that indicate the need for “federal and state policies should continue to target poor students and poor schools but use inverse funding formulas” (Casey and Rosa, 2008, 1).
Main Argument or Message
The main message that the authors aim to reveal is the clear and distinct unequal allocation of funds for schools that are currently skewed towards higher income students rather than the neediest. The effect of the policies emerging from the three levels of government agencies is that educational funds that are supposed to be allocated equally tend to be distributed more to higher income pupils, highlighting disadvantaged educational benefits that are supposed to be equally received by students regardless of income level.
Significance of the Argument for Education
The significance of the argument is seen in terms of the policies’ effect on teachers preferences for place of work. The current policies have revealed that teachers “tend to go to lower-poverty schools where working conditions may be better. High-poverty schools typically have less experienced teachers and high turnover rates, so the average teacher salary is much lower in those schools” (Casey and Rosa, 2008, 1). As shown, higher-poverty schools do not attract highly experienced teachers due to poor working conditions and the lower salary rates that come from disparate allocation of educational funding. In this regard, the pupils from high-poverty schools are exposed to teachers with lesser experiences and training and thereby, could compromise the level of instructions accorded to these students, when compared to lower-poverty schools that receive greater funding.
Critique
One personally agrees with the author’s contention that there is a need to reevaluate and assess the disparities in educational funding accorded to school on a national level to justify allocation on an equal basis. There is even more credence for local districts to request for increased educational budgets for higher-poverty schools over and above the equal budget on a per student basis to take into account the need to upgrade working conditions to attract teachers with longer working experiences.
The focus of federal, state and local agencies in terms of allocating funds for schools must include the need to upgrade physical facilities, instructional materials, teachers’ salaries and other educational expenses accorded to students on an equal footing regardless of state and district. Only then can the nation address educational needs of students after all external factors are deemed equal.
Reference
Carey, K. and Rosa, M. (2008). “School Funding’s Tragic Flaw.” Education Sector Reports.
Retrieved 05 June 2011. < https://blackboard.uncp.edu/bbcswebdav/courses/EPC-2020-800-SA11/sadker9_reading_36.pdf>Read More
Share:
Tags
Cite this document
(“School Fundings Tragic Flaws Assignment Example | Topics and Well Written Essays - 500 words”, n.d.)
School Fundings Tragic Flaws Assignment Example | Topics and Well Written Essays - 500 words. Retrieved from https://studentshare.org/education/1577598-tragic-flaws-in-school-funding

... and the character of Hamlet from William Shakespeare’s play of the same name which serves to retain the effects of the tragic while still placing a greater emphasis on man’s responsibility and control. The tragic hero had been present in a number of plays and dramas of the ancient Greeks before Aristotle, but Aristotle codified, so to speak, the requirements for a character to be considered a tragic hero. This idea was generally applied to characters with potential for tremendous greatness, such as kings and princes or those who had some sort of noble claim. However, each of these characters are considered destined to fail as a result of some tragic flaw inherent in their nature, often associated in some way with their greatest...
9 Pages(2250 words)Essay

...Do We Need a High School Diploma or College Degree to Be Successful Today? Why or Why Not? by I must say that success is a very ive concept and much would depend on how one understands it. Though it may seem that we decide for ourselves how we define this phenomenon, it is still dependent on the surrounding and culture. For an Indian boy and an American girl of the same age being successful can mean completely different things. In the Eastern culture living one`s life decently and reaching spiritual harmony, having your family healthy and wealthy, and being respected by the members of commune is success. For people of Western culture being successful often means being wealthy first of all (having a big house and two cars), being in happy...
8 Pages(2000 words)Scholarship Essay
sponsored ads
Save Your Time for More Important Things
Let us write or edit the assignment on your topic "School Fundings Tragic Flaws" with a personal 20% discount.
GRAB THE BEST PAPER

Let us find you another Assignment on topic School Fundings Tragic Flaws for FREE!