Comments (0)
Add to wishlistDelete from wishlist
Cite this document
Summary
The paper 'Young Children as Global Citizens' touches upon a very sensitive issue of child education upon matters of extreme sensitivity. It is a very positive contribution by the researchers as the information revealed would allow educationalists to better cultivate the concepts of justice issues…
Download full paperFile format: .doc, available for editing
HIDE THIS PAPERGRAB THE BEST PAPER93.6% of users find it useful 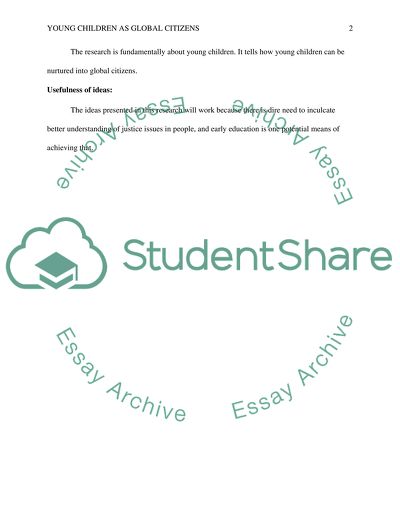 CHECK THESE SAMPLES OF Young Children as Global Citizens

Autism is under the Perv...
7 Pages(1750 words)Coursework
sponsored ads
Save Your Time for More Important Things
Let us write or edit the case study on your topic "Young Children as Global Citizens" with a personal 20% discount.
GRAB THE BEST PAPER

Let us find you another Case Study on topic Young Children as Global Citizens for FREE!