Comments (0)
Add to wishlistDelete from wishlist
Cite this document
Summary
This paper "Analysis of Education in Bushwick, Brooklyn" discusses schools that have adopted computer technology to enhance the education experience. It is yet to be seen whether zoned high schools are capable of providing educational support through information communication technology (ICT)…
Download full paperFile format: .doc, available for editing
HIDE THIS PAPERGRAB THE BEST PAPER94% of users find it useful 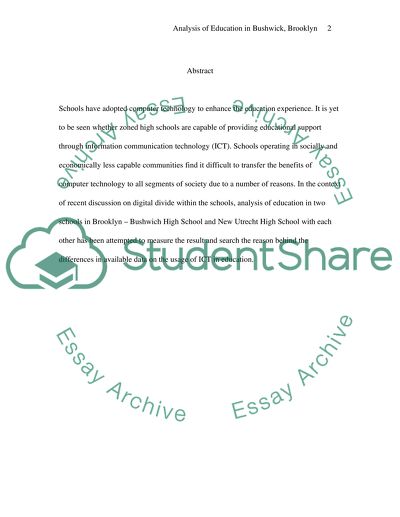 Extract of sample "Analysis of Education in Bushwick, Brooklyn"

Download file to see previous pages  In the context of recent discussion on digital divide within the schools, analysis of education in two schools in Brooklyn – Bushwich High School and New Utrecht High School with each other has been attempted to measure the result and search the reason behind the differences in available data on the usage of ICT in education.

Education in Bushwick has been a cause of concern. The issue of communication rights has been raised in the context of digital divide. The term ‘digital divide’ is used on a number of parameters; haves and have-nots being one of them comprising those who have access to information technology and those who don’t have access (Matwyshyn, 2003). Students learn information and communication technologies fast. In that context, it is significant that the benefits of ICT reach the students through the classrooms. Bolt and Crawford have rightly remarked, “This is not a question of newer school texts or better school uniforms, it is literally a social fulcrum point that we… have come to which will determine the face of our society well into the next century”(Digital Divide, 2000: 32).

While there is evidence that access to computers in schools has increased, the question remains to be answered whether low socioeconomic status (SES) schools provide students with justifiable backing to attain information communication technology (ICT) literacy (Hohlfeld et al., 2008). Education technology should be used as a tool to better students’ proficiency in English language, arts, mathematics, and science. The New York State Education department sanctions funds to meet the federal goals of computer literacy in students by the finish of eighth grade (NYSED.gov 2008-09)

CHECK THESE SAMPLES OF Analysis of Education in Bushwick, Brooklyn

Self-sensation is one of the basic human characteristics and humans develop it in the earliest stages of life. It is an awareness of those characteristics that form the personality of an individual. A child starts to realize the circumstances around him and begins to perceive different relations in a specific way. Self-sensation means to perceive and observe different behaviors of people. It is very difficult to change the self-sensation of a person in the later stages of life. Scientists, who have done research in this field, also believe that self-sensation can never be changed because it is formed in the earliest stages of a person’s life. The formation of self-sensation highly depends on the interaction between the child...
7 Pages(1750 words)Assignment
sponsored ads
Save Your Time for More Important Things
Let us write or edit the case study on your topic "Analysis of Education in Bushwick, Brooklyn" with a personal 20% discount.
GRAB THE BEST PAPER

Let us find you another Case Study on topic Analysis of Education in Bushwick, Brooklyn for FREE!