Comments (0)
Add to wishlistDelete from wishlist
Cite this document
Summary
This assignment "Using Visual Aids" discusses a visual aid based on stick figure drawings to explain “He used to exercise regularly but he doesn’t anymore.” The assignment considers types of realia to help students learn to ask for and give directions…
Download full paperFile format: .doc, available for editing
HIDE THIS PAPERGRAB THE BEST PAPER97.5% of users find it useful 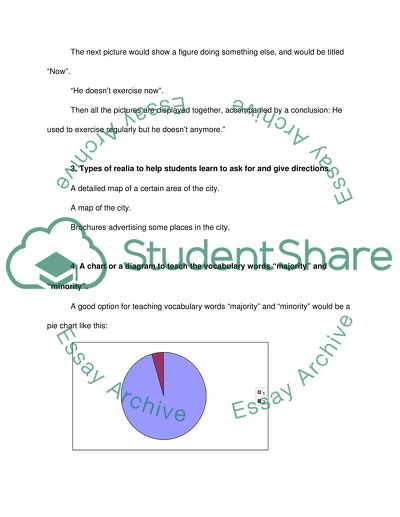 1. A timeline: She was studying while I was playing basketball. Past Specific time in the past Past Now _______XXXXXXXXXXX__________________X_________
She was studying
I was playing
_______XXXXXXXXXXX__________________X_________
Two past actions taking place at the same time. both actions are taking place during the same time period in the past.
2. A visual aid based on stick figure drawings to explain “He used to exercise regularly but he doesn’t anymore.”
The way to explain this sentence using stick figure drawings may be the following:
A picture of a figure exercising, with a title, for example “Last week”. The next picture is similar, but with a title “Last month”. The next similar picture would be titled “Last year”. All of these pictures are shown to the students one by one, then all together, saying “He exercised last week”, “He exercised last month”, “He exercised last year”.
The next picture would show a figure doing something else, and would be titled “Now”.
“He doesn’t exercise now”.
Then all the pictures are displayed together, accompanied by a conclusion: He used to exercise regularly but he doesn’t anymore.”
3. Types of realia to help students learn to ask for and give directions.
A detailed map of a certain area of the city.
A map of the city.
Brochures advertising some places in the city.
4. A chart or a diagram to teach the vocabulary words “majority” and “minority”.
A good option for teaching vocabulary words “majority” and “minority” would be a pie chart like this:
The explanation would be accompanied by some model situation. For instance, “The blue field shows the students who like apples. The purple field shows those, who like pears. We can see that more students prefer apples to pears. So, the majority of students like apples. The minority of students like pears.”
For further practice students may use the same diagram, but a different situation. Read More
Share:
Tags
Cite this document
(Using Visual Aids Assignment Example | Topics and Well Written Essays - 250 words, n.d.)
Using Visual Aids Assignment Example | Topics and Well Written Essays - 250 words. Retrieved from https://studentshare.org/education/1554484-using-visual-aids

The story of the movie is rather unusual however it has been well accepted by the public in all countries globally; the success of the film can lead to the development of specific assumptions regarding the quality of comedies produced the last years as well as the characteristics of successful comedies (based on the elements of the film that have been considered as the most successful regarding the laughter caused to the audience).


In order to understand the potential use of the work of Bergson to the explanation of the sense of ‘comic’ as developed through the particular book, it is necessary to refer primarily to the general characteristics of ‘comic’ as described by Bergson. The ab...

Originating from the monsoon rains, the annual floods...

... confidence, improving motivation and stimulating interest, and creating an overall good classroom environment. During the last two decades, huge advances in computer technology for information and communication purposes have impacted upon all levels of education and many courses as well. Using technology to support the teaching of Mathematics generally started later than for other subjects. The first electronic machine used to assist in calculation however was not the computer but the calculator. In schools in the US, UK and some other countries, the calculator has been used since the early 1980’s. Incidentally, before electronic calculators, there were mechanical calculators and even before that the slide rule to aid calculation. In US...
7 Pages(1750 words)Case Study

Wastes in the form of other resources include space required, facilities required, equipment, and tooling and fixtures (Gaither 1999). However, there are some caveats. Lean operations focus first on the final consumer and the value of the product or the services that a company produces for them. Only by knowing what the consumer exactly wants will a company be able to classify wastes and cut down on necessary wastes without compromising the value that is delivered in the form of the product and services (Schonberger & Knod 2000).
Portakabins' use of lean production has its impacts ranging from the financial aspects to the non-financial aspects of the business. From the financial perspective, cutting down the wastes in the...
8 Pages(2000 words)Assignment

This suggestion of becoming a part of a social networking site or blogging can prove extremely useful as it might not only be helpful for the group of pregnant teens being dealt at the moment but might also be a great help for girls worldwide undergoing similar dilemmas. This is because...

6 Pages(1500 words)Article
sponsored ads
Save Your Time for More Important Things
Let us write or edit the assignment on your topic "Using Visual Aids" with a personal 20% discount.
GRAB THE BEST PAPER

Let us find you another Assignment on topic Using Visual Aids for FREE!