Comments (0)
Add to wishlistDelete from wishlist
Cite this document
Summary
In the following paper “Library of American University in Dubai” the author focuses on the need for library automation, which has arisen because of the information explosion. Many libraries are being inundated with unprecedented demands by their users…
Download full paperFile format: .doc, available for editing
HIDE THIS PAPERGRAB THE BEST PAPER98.7% of users find it useful 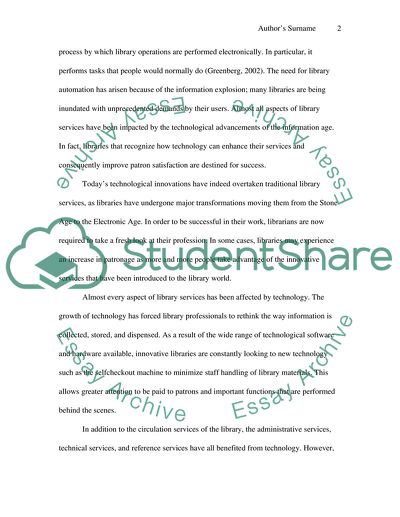 Extract of sample "Library of American University in Dubai"

Download file to see previous pages Today’s technological innovations have indeed overtaken traditional library services, as libraries have undergone major transformations moving them from the Stone Age to the Electronic Age. In order to be successful in their work, librarians are now required to take a fresh look at their profession. In some cases, libraries may experience an increase in patronage as more and more people take advantage of the innovative services that have been introduced to the library world.
Almost every aspect of library services has been affected by technology. The growth of technology has forced library professionals to rethink the way information is collected, stored, and dispensed. As a result of the wide range of technological software and hardware available, innovative libraries are constantly looking to new technology such as the self-checkout machine to minimize staff handling of library materials. This allows greater attention to be paid to patrons and important functions that are performed behind the scenes.
In addition to the circulation services of the library, the administrative services, technical services, and reference services have all benefited from technology. However, the circulation of library materials is a core operation of most libraries. Without the circulation department, most academic libraries would not function efficiently, as faculty and students rely on library materials for meeting their day to day needs.
Justification for the Suggestion
It is important to question the extent to which self-checkout machines are used. As Cherry (1999, p. 2) noted, in any organization, services must be “continuously examined and evaluated, [and] the results of user satisfaction studies are indicators for change and for the development of policy within an organization.” Unfortunately, today’s libraries have been faced with an explosion in information availability, an increase in the expectations of patrons and financial constraints. ...Download file to see next pagesRead More
Share:
Tags
Cite this document
(Library of American University in Dubai Assignment, n.d.)
Library of American University in Dubai Assignment. Retrieved from https://studentshare.org/education/1545646-business-report
(Library of American University in Dubai Assignment)
Library of American University in Dubai Assignment. https://studentshare.org/education/1545646-business-report.
“Library of American University in Dubai Assignment”, n.d. https://studentshare.org/education/1545646-business-report.
Comments (0)
Click to create a comment or rate a document

CHECK THESE SAMPLES OF Library of American University in Dubai

...﻿Admission Essay This paper will discuss my reasons why I want to Study in American University (AU) and how it is going to help me as a Qatari to study in said university. I would in effect be discussing how to my stay with American University would fit into my professional goals and personal goals. Universities or schools have their role of helping people to prepare for the future and the present realities and complexities of the global business due to fast-changing technology require an education that would prepare one to face greater challenges of the future. I believe that American University education can help me to develop as a person in attaining my professional and personal goals. Some things are better learned...
2 Pages(500 words)Essay

I being a strong supporter of social justice and the politically correct individuals will be at home in AU due to its strong emphasis of these issues. Moreover, having interacted with diverse groups of people of different ethnicity I will adapt and interact healthily with the AU global community. They're also being clubs and varied extra-curricular activities AU will be a home away from home.
1 Pages(250 words)Admission/Application Essay

... by the New York Public Library to the Crystal Bridges Museum of American Art in Arkansas, bankrolled by Alice Walton. It was a sealed auction, and the actual price paid remains unknown but it is estimated to have reached somewhere near $35 million, which was a record price paid at that time for an American art. It made headlines and rippled a controversy which continues to remain so. Many are of the belief that what happened was wrong and the painting should have stayed at the Durand’s home for much of his adult life. This painting may not be his paramount art work, but it is one of the icons of American art. Lumen Reed, a successful grocery wholesaler, facilitated Durand’s work by ordering a set of painted portraits of the first seven...
7 Pages(1750 words)Essay

2. “The calm, deliberate composure with which he spoke of his late deeds and intentions, the expression of his fiendlike face when excited by enthusiasm, still bearing the stains of the blood...
9 Pages(2250 words)Assignment
sponsored ads
Save Your Time for More Important Things
Let us write or edit the assignment on your topic "Library of American University in Dubai" with a personal 20% discount.
GRAB THE BEST PAPER

Let us find you another Assignment on topic Library of American University in Dubai for FREE!