Comments (0)
Add to wishlistDelete from wishlist
Cite this document
Summary
An author of this statement will share his experience in studying a history in order to form a paper for the university entrance. Therefore, the writer seeks to describe the influences that have contributes ones personal growth, centralizing the family and relationships…
Download full paperFile format: .doc, available for editing
HIDE THIS PAPERGRAB THE BEST PAPER95.3% of users find it useful 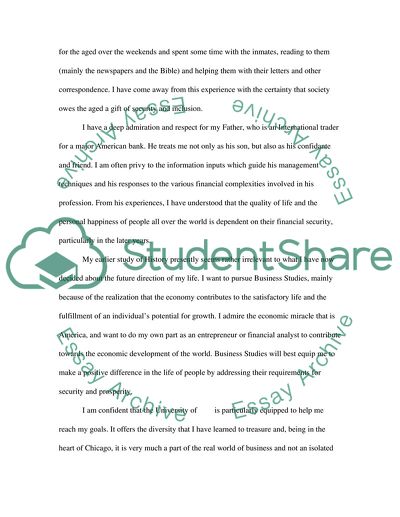 Personal Essay The circumstances of my birth and upbringing have given a distinct shape to my personality. My Father is an Indian from Goa, which isitself a rich blend of Indian, Portuguese and Dutch cultural influences. Being a Roman Catholic is again a difference in a predominantly Hindu-Muslim nation. To further enrich my heritage, my Mother is Irish Caucasian. I was born in London. In addition to this, I have spent my formative years more or less as a globe-trotter, living for short periods in Japan, Hong Kong and Singapore, before settling down in Chicago ten years ago. This lifestyle, with it’s exposure to a variety of cultures and ethnicities, has been the learning experience of my lifetime and has made me very much aware of the universality and basic oneness of mankind, despite differences of race, language and religion. It has made me a true ‘citizen of the world.’
The extracurricular activity I have most enjoyed has been running track in High School. This has inculcated in me the passion to go all out to reach my goal, taught me that preparation is the key to success and has given me endurance and the hunger to win. It has also taught me to work as a member of a team towards a common objective and made me appreciate the camaraderie of a commonly motivated group and also the importance of physical fitness in life.
The strongest influence of my life has been my parents. My Mother, who is a registered nurse at a retirement home, has influenced me to be sensitive to the needs of the economically and socially disadvantaged and also the aged and the ill. At her suggestion, I have been involved in a community project in which I have visited hospices for the aged over the weekends and spent some time with the inmates, reading to them (mainly the newspapers and the Bible) and helping them with their letters and other correspondence. I have come away from this experience with the certainty that society owes the aged a gift of security and inclusion.
I have a deep admiration and respect for my Father, who is an International trader for a major American bank. He treats me not only as his son, but also as his confidante and friend. I am often privy to the information inputs which guide his management techniques and his responses to the various financial complexities involved in his profession. From his experiences, I have understood that the quality of life and the personal happiness of people all over the world is dependent on their financial security, particularly in the later years.
My earlier study of History presently seems rather irrelevant to what I have now decided about the future direction of my life. I want to pursue Business Studies, mainly because of the realization that the economy contributes to the satisfactory life and the fulfillment of an individual’s potential for growth. I admire the economic miracle that is America, and want to do my own part as an entrepreneur or financial analyst to contribute towards the economic development of the world. Business Studies will best equip me to make a positive difference in the life of people by addressing their requirements for security and prosperity.
I am confident that the University of is particularly equipped to help me reach my goals. It offers the diversity that I have learned to treasure and, being in the heart of Chicago, it is very much a part of the real world of business and not an isolated academic environment. I am also confident that my maturity is now equal to the task of making the most of the opportunities the University of offers. Read More
Share:
Tags
Cite this document
(“Personal Growth Influences Essay Example | Topics and Well Written Essays - 500 words”, n.d.)
Retrieved from https://studentshare.org/education/1541604-please-write-a-short-essay-about-yourself-including-experience-and-influences-that-have-contributed-to-your-personal-growth-describe-extracurricular-activities

Teleportation is the process of disintegrating the body to make a copy of a person in another place say, for example, Jupiter as a means of travel. In the teleportation experiment, Parfit demonstrated the problem of teleportation when the machine malfunctioned. The machine was not able to destroy the original body and yet a copy was already sent to Mars. So the problem arises of determining who is the real you? This phenomenon of teleportation is bad because it is problematic. It is problematic not only in the sense that the machine malfunctioned that there became two individuals because the original was not destroyed. It is mind-boggling, but we cannot cease to wonder how does the copy thinks? About himself, the universe around h...
6 Pages(1500 words)Essay
sponsored ads
Save Your Time for More Important Things
Let us write or edit the essay on your topic "Personal Growth Influences" with a personal 20% discount.
GRAB THE BEST PAPER

Let us find you another Essay on topic Personal Growth Influences for FREE!