Comments (0)
Add to wishlistDelete from wishlist
Cite this document
Summary
Tillie Olsen’s I Stand Here Ironing and Anne Tyler’s Teenage Wasteland depict the regrets of two mothers in rearing and bringing up their children and their attempts to rectify their past mistakes in vain which shows that mother’s continuously try to be the best…
Download full paperFile format: .doc, available for editing
HIDE THIS PAPERGRAB THE BEST PAPER91.8% of users find it useful 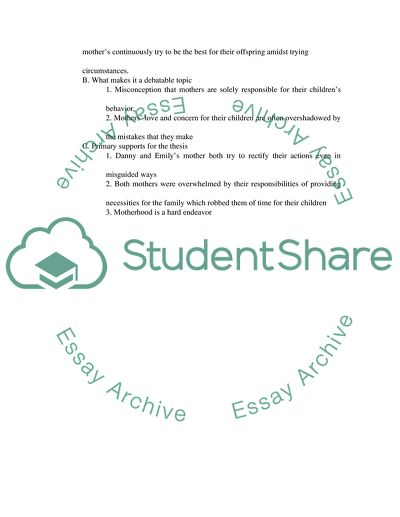 18 April 2007 Presentation for Literature I. Writing Process A. Improvements in my writing process
1. Clearer and more logical structure which makes it easier for readers to understand and grasp what I am trying to convey
2. Better and more appropriate choice of words to strengthen and emphasize points
3. More interesting introduction to capture reader’s attention
4. Improved sentence construction and structure
5. More grammatically correct and well-polished through editing and proofreading
6. Better conclusions which ties up with introduction and reiterates the important points in the essay
B. Important things I have learned in class
1. Organize ideas first before writing
2. Allot time to edit and proofread work
3. Introduction should be catchy in order to capture reader’s interest
4. An individual’s writing shows what type of person he/she is
5. Knowledge can best conveyed through improvement in writing skills
C. How the things I have learned in class will help me in the future
1. Enable me to express myself better
2. Boost my confidence and improve my self-image
3. Increase my chance of getting a good job and start a career
II. Research Paper
A. Thesis: Tillie Olsen’s I Stand Here Ironing and Anne Tyler’s Teenage Wasteland depict the regrets of two mothers in rearing and bringing up their children and their attempts to rectify their past mistakes in vain which shows that mother’s continuously try to be the best for their offspring amidst trying circumstances.
B. What makes it a debatable topic
1. Misconception that mothers are solely responsible for their children’s behavior
2. Mothers’ love and concern for their children are often overshadowed by the mistakes that they make
C. Primary supports for the thesis
1. Danny and Emily’s mother both try to rectify their actions even in misguided ways
2. Both mothers were overwhelmed by their responsibilities of providing necessities for the family which robbed them of time for their children
3. Motherhood is a hard endeavor Read More
Share:
Tags
Cite this document
(“Presentation for Literature Class Essay Example | Topics and Well Written Essays - 500 words”, n.d.)
Presentation for Literature Class Essay Example | Topics and Well Written Essays - 500 words. Retrieved from https://studentshare.org/education/1540356-presentation-for-literature-class

CHECK THESE SAMPLES OF Presentation for Literature Class

The idea of 'postcolonial literature' was initially conceived to describe writing from the former British Empire. It was in many ways a substitute for Commonwealth literature (referring to the loose political entity created after the British empire ended), though it basically maintained the same shape.

Most of the literature that was included was written in English. Though critics have contested it, there are strong thematic and formal similarities between Anglophone African, British Caribbean, and South Asian pieces of literature from the 1950s-1980s. This may offer a clue to the answer to the question regarding Singh. The question is It is never clear what Singh intends by writing his book, his purpose keeps changing...

It may have been argued that since people, in general, are greedy and as a natural instinct are ambitious- they may always want a bigger share of the scarce resources and try to...

In contrast to other writers of his generation, Tolstoy was connected with noble families of the Russian aristocracy, who had brilliant French pronunciation and manners. At the same time, he was a person full of antagonism. Whe...

In 1918, William Faulkner attempted to become a pilot for the U.S. Army but was turned down because of his height. He “never stood taller than five feet, six inches tall” (Padgett 1). He never gave up and traveled to Toronto, Canada where he posed as an English national and was admitted to the Royal Canadian Air Force (EGS 2). He then traveled to France with this force, though, when they reached France, the war had ended. (EGS 3)
From 1919 until 1921, after returning to the U.S, William Faulkner attended the University of Mississippi, where he wrote for the school’s newspaper, as well as his hometown’s newspaper. (EGS 3).He also drafted his first play that was presented by the university’s drama...
7 Pages(1750 words)Literature review
sponsored ads
Save Your Time for More Important Things
Let us write or edit the essay on your topic "Presentation for Literature Class" with a personal 20% discount.
GRAB THE BEST PAPER

Let us find you another Essay on topic Presentation for Literature Class for FREE!