Comments (0)
Add to wishlistDelete from wishlist
Cite this document
Summary
The writer of this essay discusses a plan to practice medicine in an underserved or disadvantaged area. The writer of this essay describes how he foster growth and discovery in one aspect of his life At Rosalind Franklin University School of Medicine -a Life in Discovery…
Download full paperFile format: .doc, available for editing
HIDE THIS PAPERGRAB THE BEST PAPER91.7% of users find it useful 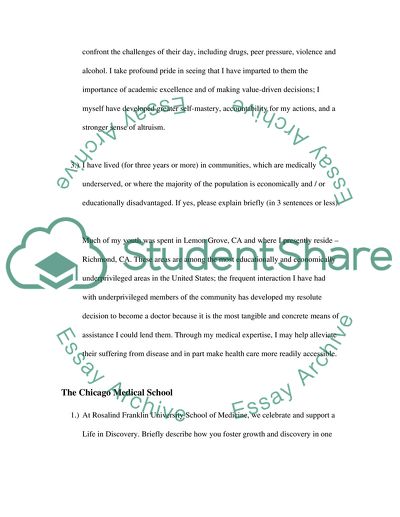 I have considered myself ‘disadvantaged’ at several points in my life when I had to stop my studies and work full-time because of the financial constraints experienced by my family. My volunteer experiences with volunteer groups such as the Making Changes Freedom School, Tutor Experts, and the American Red Cross Blood Mobile has given me through exposure to the plight of the underprivileged. This empathy for marginalized communities and my own roots as a minority has caused me to have firm resolve to serve  I have worked (volunteer or paid in a medically underserved, economically and/or educationally disadvantaged area If yes, please explain briefly in 3 sentences or less.
I have worked as a tutor-mentor at the Making Changes Freedom School, which is a completely volunteer-run, grassroots movement of community members who sincerely want to make an authentic, positive difference in lives of elementary and high school students. This opportunity has allowed me to interact with a diverse, multi-cultural group, and be passionately involved in helping these youths bravely confront the challenges of their day, including drugs, peer pressure, violence and alcohol. I take profound pride in seeing that I have imparted to them the importance of academic excellence and of making value-driven decisions; I myself have developed greater self-mastery, accountability for my actions, and a stronger sense of altruism.
Much of my youth was spent in Lemon Grove, CA and where I presently reside – Richmond, CA. These areas are among the most educationally and economically underprivileged areas in the United States; the frequent interaction I have had with underprivileged members of the community has developed my resolute decision to become a doctor because it is the most tangible and concrete means of assistance I could lend them. Through my medical expertise, I may help alleviate their suffering from disease and in part make health care more readily accessible.
I vividly recall the points in my life where I had to make the difficult decision of stopping school and being compelled to take on a full-time job. These are precisely the experiences that have helped me most in my search for meaning and purpose. My first expethe rience was my work with the Pharmacology and Toxicology Department (PTRL) where I worked as laboratory technician. The role has given me thorough exposure to environmental, metabolism, agrochemical analysis, industrial chemical, and phaexpertical research. This is the first time that I have experienced an authentic appreciation of scientific research; each day was marked with excitement ana d enthusiasm – of finding answers to questions. Moreover, the opportunity has strongly developed the competencies of time management, strong results orientation, organizational skills, and working with a team.
Another similar experience worth sharing was my work with Pfizer’s Global Research and Development Unit, where I began with weighing mouse feed and general animal husbandry to tissue collection, necropsies, eye bleeds using a capillary tube, and intra-cardiac bleeds. I consider this a temporary hiatus, where my desire to go back to school was strengthened; this sense of renewal brought me to school again at the age of thirty-one. These experiences have me approach life and school more maturely, and these have come into fruition in the academic distinctions and scholarships I have been blessed with in college at the University of California in Berkeley, majoring in Public Health. I am filled with a strong desire to serve underprivileged others through biomedical research, focusing on diabetes or organ transplantation.
Read More
Share:
Tags
Cite this document
(“Clinical Experience for Howard University School of Medicine and The Admission/Application Essay”, n.d.)
Clinical Experience for Howard University School of Medicine and The Admission/Application Essay. Retrieved from https://studentshare.org/education/1535072-medical-school-essay

“Clinical Experience for Howard University School of Medicine and The Admission/Application Essay”, n.d. https://studentshare.org/education/1535072-medical-school-essay.
Comments (0)
Click to create a comment or rate a document

To lay the foundation for my vision, I set my short-term career goal to establish our own venture fund resultantly transforming the services of Gravity from mere consultancy to ‘advisory service and investment’. A team of high expertise was set to realize the prospects and openings for investing in these traditional industries.
The series of career events that preceded the recent fame of Gravity in attracting direct investments from global giants enhanced my ability to make an impact on the society while striving for my career goal. My vision was inspired since I heard the news of Chinese Internet companies being listed on the NASDAQ. The skill acquirement process began as I joined NET 263 as a CFO assistant where...
6 Pages(1500 words)Essay

In this context, the Southampton Solent University’s existence as a business organization in the strategic business sense would be defined as a clear attempt at continuously engaging in the present and future activities with a view to achieving its long term objectives of which the satisfaction of stakeholders, particularly shareholders, is of paramount importance. Its mission statement is “The pursuit of inclusive and flexible forms of Higher Education which meet the needs of employers and prepare students to succeed in a fast-...
8 Pages(2000 words)Coursework
sponsored ads
Save Your Time for More Important Things
Let us write or edit the admission/application essay on your topic "Clinical Experience for Howard University School of Medicine and The Chicago Medical School" with a personal 20% discount.
GRAB THE BEST PAPER

Let us find you another Admission/Application Essay on topic Clinical Experience for Howard University School of Medicine and The Chicago Medical School for FREE!