Comments (0)
Add to wishlistDelete from wishlist
Cite this document
Summary
In the paper “Education as Ideological Management,” the author discusses the fact that the United States was built on the foundations of freedom where immigrants seeking relief from persecution, injustice, and inequality poses a contrast to the fact that racism has been a central issue…
Download full paperFile format: .doc, available for editing
HIDE THIS PAPERGRAB THE BEST PAPER95.3% of users find it useful 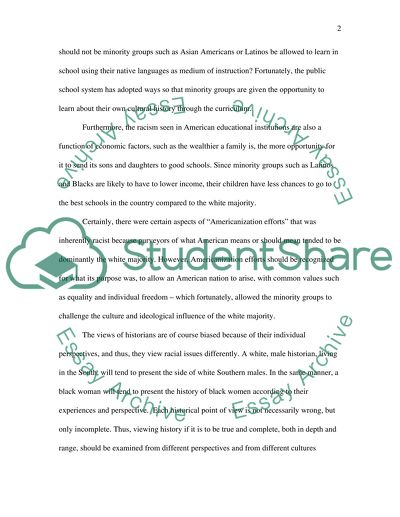 Blacks succeeded somehow in overturning the system so that the colored race could be legally and socially recognized as indeed equal with whites, succeeding periods showed that the cultural element of racism proved harder to overturn. Succeeding minority groups had the same problem with inequality, wherein the pervading culture of white, Protestant and Anglo-Saxon continued to view Native Americans, Asian Americans, Latinos, and other minority groups a threat to the dominant ideology. While the past was characterized by blatant policies of racism and inequality, the current period is an era where the question of self-awareness and self-examination of where ideological biases could be examined.
It is not as much as American education deliberately perpetuates racism but in the way ideology is carried unconsciously, spreading biases and prejudice even to those who are themselves considered minorities. For example, colored people may unconsciously imbibe the cultural and ideological biases of the dominant cultural group, thereby undermining their very sense of identity. Culture has a pervasive impact on the educational system, embedded not in just the way teachers teach, but in the systemic practices. For example, since the United States considers itself a multicultural society, should not be minority groups such as Asian Americans or Latinos be allowed to learn in school using their native languages as medium of instruction Fortunately, the public school system has adopted ways so that minority groups are given the opportunity to learn about their own cultural history through the curriculum.
Furthermore, the racism seen in American educational institutions is also a function of economic factors, such as the wealthier a family is, the more opportunity for it to send its sons and daughters to good schools. Since minority groups such as Latinos and Blacks are likely to have to lower-income, their children have fewer chances to go to the best schools in the country compared to the white majority.
Certainly, there were certain aspects of "Americanization efforts" that were inherently racist because purveyors of what American means or should mean tended to be dominantly the white majority. However, Americanization efforts should be recognized for what its purpose was, to allow an American nation to arise, with common values such as equality and individual freedom - which, fortunately, allowed the minority groups to challenge the culture and ideological influence of the white majority.
The views of historians are of course biased because of their individual perspectives, and thus, they view racial issues differently. A white, male historian, living in the South, will tend to present the side of white Southern males. In the same manner, a black woman will tend to present the history of black women according to their experiences and perspective. Each historical point of view is not necessarily wrong, but only incomplete. Thus, viewing history if it is to be true and complete, both in-depth and range, should be examined from different perspectives and from different cultures continuously. Moreover, the one examining should be aware of his individual biases and history. Only by then, will a history that has less bias and prejudice could be considered. Read More
Share:
Tags
Cite this document
(Education as Ideological Management Essay Example | Topics and Well Written Essays - 500 words, n.d.)
Education as Ideological Management Essay Example | Topics and Well Written Essays - 500 words. https://studentshare.org/education/1534636-education-as-ideological-management
(Education As Ideological Management Essay Example | Topics and Well Written Essays - 500 Words)
Education As Ideological Management Essay Example | Topics and Well Written Essays - 500 Words. https://studentshare.org/education/1534636-education-as-ideological-management.
“Education As Ideological Management Essay Example | Topics and Well Written Essays - 500 Words”. https://studentshare.org/education/1534636-education-as-ideological-management.
Comments (0)
Click to create a comment or rate a document

CHECK THESE SAMPLES OF Education as Ideological Management

Civil Aviation Administration of China (CAAC) – undoubtedly advanc...
7 Pages(1750 words)Assignment
sponsored ads
Save Your Time for More Important Things
Let us write or edit the essay on your topic "Education as Ideological Management" with a personal 20% discount.
GRAB THE BEST PAPER

Let us find you another Essay on topic Education as Ideological Management for FREE!