A Letter of Intenet from Foreign Student - Admission/Application Essay Example

Comments (0)
Add to wishlistDelete from wishlist
Cite this document
Summary
The author states that it is very easy for foreign students to make the wrong decision and select a college which neither allowed them the realization of their potential nor the expression of their talent. This is the reason why the author is seeking transfer to another college. …
Download full paperFile format: .doc, available for editing
HIDE THIS PAPERGRAB THE BEST PAPER96.7% of users find it useful 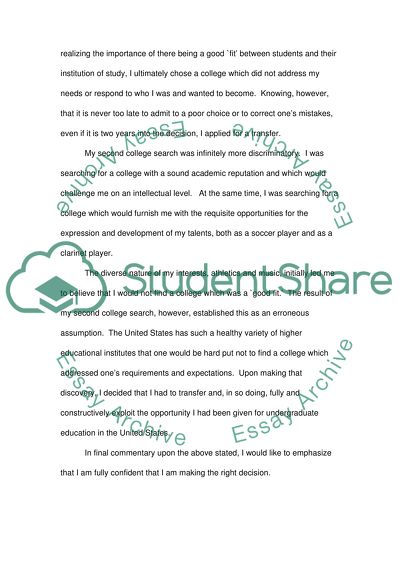 Extract of sample "A Letter of Intenet from Foreign Student"

Selecting a college or is often a very difficult decision. For foreign who neither have the benefit of high school guidance counselors nor advisors, it is an especially complex and confusing decision. With no guidance or point of reference, it is very easy for foreign students to make the wrong decision and select a college which neither allowed them the realization of their potential nor the expression of their talent. This is precisely what happened with me and is the reason why I am seeking transfer to another college.
Having been told that foreign students often have a very difficult time settling into and acclimatizing themselves to the American college environment and education system, my initial college search was limited to community colleges. I had been advised that community colleges were comparatively easy and, more importantly, a good introduction to American academics. It was on the basis of this advice that I selected my college.
As evidenced by my decision to transfer, my selection was hardly successful. The college, while it was a very good choice for some of my colleagues, simply did not allow me to express my talents, either as an athlete or a musician, or develop my potentials. Realizing that college presents one with such academic and extra-curricular opportunities as which allow for the personal and intellectual development which are the cornerstones of professional success, I realized the imperatives of transfer.
My decision to transfer is a natural outcome of the flawed nature of my initial search. Having restricted myself to community colleges and not really realizing the importance of there being a good fit' between students and their institution of study, I ultimately chose a college which did not address my needs or respond to who I was and wanted to become. Knowing, however, that it is never too late to admit to a poor choice or to correct one's mistakes, even if it is two years into the decision, I applied for a transfer.
My second college search was infinitely more discriminatory. I was searching for a college with a sound academic reputation and which would challenge me on an intellectual level. At the same time, I was searching for a college which would furnish me with the requisite opportunities for the expression and development of my talents, both as a soccer player and as a clarinet player.
The diverse nature of my interests, athletics and music, initially led me to believe that I would not find a college which was a good fit.' The result of my second college search, however, established this as an erroneous assumption. The United States has such a healthy variety of higher educational institutes that one would be hard put not to find a college which addressed one's requirements and expectations. Upon making that discovery, I decided that I had to transfer and, in so doing, fully and constructively exploit the opportunity I had been given for undergraduate education in the United States.
In final commentary upon the above stated, I would like to emphasize that I am fully confident that I am making the right decision. Read More
Share:
Tags
Cite this document
(“A Letter of Intenet from Foreign Student Admission/Application Essay”, n.d.)
A Letter of Intenet from Foreign Student Admission/Application Essay. Retrieved from https://studentshare.org/education/1531923-admission-essay-for-foreign-students

“A Letter of Intenet from Foreign Student Admission/Application Essay”, n.d. https://studentshare.org/education/1531923-admission-essay-for-foreign-students.
Comments (0)
Click to create a comment or rate a document

CHECK THESE SAMPLES OF A Letter of Intenet from Foreign Student

There was a need for the same as well more so because the rulers of the respective nations wanted their own particular identity and this brings us to the question that if they needed such an identity what was the need of having European Union (EU)? They could have easily made a body comprising of two or for that matter three countries and enacted their own policies and gone about it in the long run but bringing all the European nations together to a single platform only means that there was a courteous move behind the very same. There was an understanding that since these nations had so much in common amongst each other, thus there should be an understanding as concerns to their oneness and unity which could only be achieved throu...
12 Pages(3000 words)Term Paper

However, political instability and turmoil are yet a few of the hindrances which could affect the stock markets and in a worst-case scenario may as well, completely shut down businesses (Root 1982). The new business practices, on the other hand, involve a transparent setup and a free market, free of turmoil to operate and maximize production (Bennett 1998). Also, in such a case, the consumer must also be able to spend on the product, to make it a success. However, Burma currently has strong institutions having a hold on the resources which need to be exploited, i.e. a few of the military generals and autocrats have access to the resources, and thus, dealing with these groups might prove to be a waste of the corporation`s own effor...
6 Pages(1500 words)Assignment

Conduct Becoming of a Lansing Student

It serves as their main source of guidance during confusing times and a reference for any questions that they may have regarding conducting themselves as a student both during and after class hours.
The reason behind the codebook is simple. The university or college has to pick up where the parents left off in the discipline and safety concerns of the child. The parents entrusted their prized possession, their children to the school so the school is now tasked to ensure the safety and continued development of the child both as an individual and a student.
It is because of these aforementioned reasons that the students' best interest would be served by his adherence to the codebook. Once he becomes familiar with its conte...
7 Pages(1750 words)Assignment
sponsored ads
Save Your Time for More Important Things
Let us write or edit the admission/application essay on your topic "A Letter of Intenet from Foreign Student" with a personal 20% discount.
GRAB THE BEST PAPER

Let us find you another Admission/Application Essay on topic A Letter of Intenet from Foreign Student for FREE!