Comments (0)
Add to wishlistDelete from wishlist
Cite this document
Summary
Language acquisition has been defined as the process through which learners, and more so infants, acquire the ability to speak in a new language. The seemingly effortless ability of children to acquire the ability to speak a language without formally attending any language classes has always been a matter of intrigue, thereby making language acquisition one of the most researched and most controversial topics of cognitive science (Pinker, language acquisition)…
Download full paperFile format: .doc, available for editing
HIDE THIS PAPERGRAB THE BEST PAPER97.7% of users find it useful 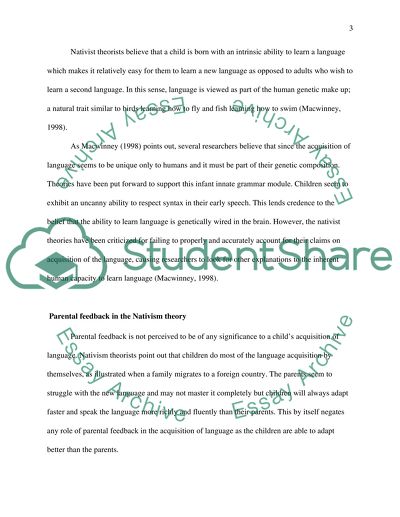 Download file to see previous pages Several theories have been put forward that try and explain this process (Pinker, language acquisition).
Some theorists believe that the acquisition of language is a natural and intrinsic part of the child growth process and down play the importance of parental feedback while others believe that it is the result of their surrounding environment and how they interact with others, thereby according significance to adult- child interaction. This paper seeks to analyze the different theories that have been put forward to explain language acquisition evaluating how they all explore the importance of parental feedback in the development of linguistic skills.
Nativist theorists believe that a child is born with an intrinsic ability to learn a language which makes it relatively easy for them to learn a new language as opposed to adults who wish to learn a second language. In this sense, language is viewed as part of the human genetic make up; a natural trait similar to birds learning how to fly and fish learning how to swim (Macwinney, 1998).
As Macwinney (1998) points out, several researchers believe that since the acquisition of language seems to be unique only to humans and it must be...
Theories have been put forward to support this infant innate grammar module. Children seem to exhibit an uncanny ability to respect syntax in their early speech. This lends credence to the belief that the ability to learn language is genetically wired in the brain. However, the nativist theories have been criticized for failing to properly and accurately account for their claims on acquisition of the language, causing researchers to look for other explanations to the inherent human capacity to learn language (Macwinney, 1998).
Parental feedback in the Nativism theory
Parental feedback is not perceived to be of any significance to a child's acquisition of language. Nativism theorists point out that children do most of the language acquisition by themselves, as illustrated when a family migrates to a foreign country. The parents seem to struggle with the new language and may not master it completely but children will always adapt faster and speak the language more richly and fluently than their parents. This by itself negates any role of parental feedback in the acquisition of language as the children are able to adapt better than the parents.
Emergentism
This is a branch of nativist theory approach but differs from nativism in that it views the acquisition of language as an outcome not just of the intrinsic biology of human cognition, but also as a result of social patterns of interaction and input. Emergentism views children as learning language through means of a self organizing map with auditory, concept and articulatory as the pillars. A child learns language almost independently by associating different elements to these pillars (Macwinney, 1998).
Macwinney (1998) points out that there are neural networks in the brain that will influence the ...Download file to see next pagesRead More
Share:
Tags
Cite this document
(“Language Acquisition Essay Example | Topics and Well Written Essays - 2500 words”, n.d.)
Retrieved from https://studentshare.org/education/1526748-language-acquisition

CHECK THESE SAMPLES OF Language Acquisition

Skinner and many others. From their theories and arguments (Avram) Noam Chomsky, an American linguist and educator, as well as political activist, came up with his own views and theories which rejected, accepted and added depth in the study of language revolutionizing linguistics.
Today, English is known to be the universal language. To be at par with the rest of the world and to be able to compete and join the bandwagon of technology and business, even professionals of different nationalities study language without so much of a difficulty.
The paper consists of discussions on Chomsky’s view on Language Development focusing more on what is called the “universal grammar” comparing it with the theories of...

Merger and Acquisition in Airline Industry

Over the last two decades, there has been a profound shift in thinking about the role that people play in the success of the business, with a growing view that the management of people is a key organizational capability and one, which should be highly integrated with the strategic aims of the business. A cornerstone of this notion of International human resource management is the creation of linkage or integration between the overall strategic aims of the business and the human resource strategy and implementation. Despite new and increasing challenges, the global industry facilitates economic growth, global trade, and international tourism and continues to restructure, develop and adapt to counter them such as through mergers and...
20 Pages(5000 words)Case Study

The use of the narrator in the novel helps illustrate sensual, erotic, and heartbreaking moments. To achieve its goal of exploring the acknowledged subject of love, betrayal, beauty, and desire, the author approaches the issues with an overwhelming zeal. Hence, the aim of the study is to evaluate the various techniques used in the two narratives in communicating their notions of the various subjects within the novels.
Acker uses language from other writers; as well, the plot in her fiction employs appropriation, which in return propels appropriation to the extreme since a huge part of her writing integrates texts of fiction from past writers. Blood and Guts in High school deal with the journey of a young lady through a dark w...
8 Pages(2000 words)Literature review
sponsored ads
Save Your Time for More Important Things
Let us write or edit the essay on your topic "Language Acquisition" with a personal 20% discount.
GRAB THE BEST PAPER

Let us find you another Essay on topic Language Acquisition for FREE!