Comments (0)
Add to wishlistDelete from wishlist
Cite this document
Summary
The writer of the present essay seeks to conduct a comparative study on the aspects of primary education in the United Kingdom and Italy. The writer would describe and analyze the policies, provisions, and practices in regard to the study process in both countries…
Download full paperFile format: .doc, available for editing
HIDE THIS PAPERGRAB THE BEST PAPER98.2% of users find it useful 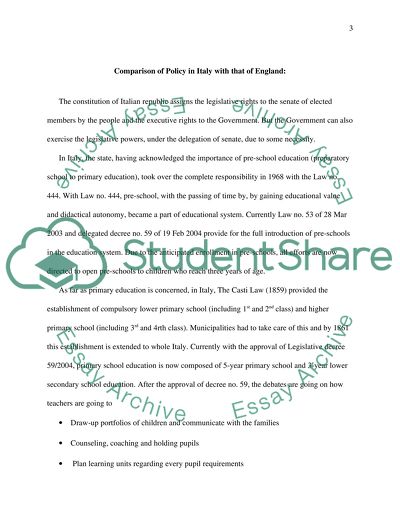 Download file to see previous pages In Italy, the state has acknowledged the importance of pre-school education (preparatory school to primary education), took over the complete responsibility in 1968 with the Law no. 444. With Law no. 444, pre-school, with the passing of time by, by gaining educational value and didactical autonomy, became a part of the educational system. Currently Law no. 53 of 28 Mar 2003 and delegated decree no. 59 of 19 Feb 2004 provide for the full introduction of pre-schools in the education system. Due to the anticipated enrollment in pre-schools, all efforts are now directed to open pre-schools to children who reach three years of age.
As far as primary education is concerned, in Italy, The Casti Law (1859) provided the establishment of compulsory lower primary school (including 1st and 2nd class) and higher primary school (including 3rd and 4rth class). Municipalities had to take care of this and by 1861 this establishment is extended to the whole of Italy. Currently, with the approval of Legislative Decree 59/2004, primary school education is now composed of 5-year primary school and 3-year lower secondary school education. After the approval of decree no. 59, the debates are going on how teachers are going to
UK Government consists of Legislature, the Executive and the judiciary. The parliament consists of Queens, the appointed house of Lords and the elected House of Commons consisting of 659 members. Parliament passes laws, monitors government policies. The Executive cabinet consists of 20 ministers, usually ahead of government departments, appointed and chosen by Prime Minister.
Before school standard and framework act 1998, Local Education Authority (LEA) gave provisions to children aged between 2 to 5 years having some Special Education Needs. The 1998 Act imposed a duty on LEA to provide pre-school education in their area. By Apr 2004, LEA has provided free places for two and a half hours of pre-school five days a week to all 3-year and 4-year old children ...Download file to see next pagesRead More
Share:
Tags
Cite this document
(“Early Childhood Education Master Essay Example | Topics and Well Written Essays - 2500 words”, n.d.)
Early Childhood Education Master Essay Example | Topics and Well Written Essays - 2500 words. Retrieved from https://studentshare.org/education/1519761-early-childhood-education-master-essay

It wasn’t until the establishment of The Juvenile Justice Courts were children offici...
6 Pages(1500 words)Research Proposal

Picasso’s painting of Tauromachy was completed in 1934 as an etching to display a bullfight. The center of this particular etching displays a bullfight after the bull as been pierced with a spear. The focus of the etching is with the bullhead, which is opened and screaming in pain with the back of the head showing banderillas, or piercing from a spear. To one side of this is a woman’s head, which comes in front of the horse. She has an outstretched arm from the right-hand corner which is holding a handkerchief to throw into the arena. The etching is further accented with the horse’s body garment, which has a hole in the front leg and which is significant with the dressed horses that were used in bullfighting in P...
8 Pages(2000 words)Essay
sponsored ads
Save Your Time for More Important Things
Let us write or edit the essay on your topic "Early Childhood Education in UK in Comparison to Italy" with a personal 20% discount.
GRAB THE BEST PAPER

Let us find you another Essay on topic Early Childhood Education in UK in Comparison to Italy for FREE!