Comments (0)
Add to wishlistDelete from wishlist
Cite this document
Summary
Do children really perform better at private schools than they do at public schools In most of America, there is a lot of apprehension surrounding the "Public School versus Private School" debate. Many Americans feel that private schools far exceed the education that public schools have to offer…
Download full paperFile format: .doc, available for editing
HIDE THIS PAPERGRAB THE BEST PAPER95.5% of users find it useful 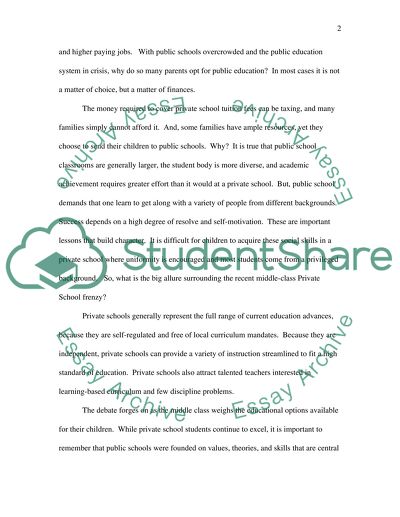 Public School Vs. Private School: An American Debate Do children really perform better at private schools than they do at public schools In most of America, there is a lot of apprehension surrounding the "Public School versus Private School" debate. Many Americans feel that private schools far exceed the education that public schools have to offer. However, recent studies show that public school students with socioeconomic backgrounds similar to those of private school students generally outperform private school students on standardized tests. But, while public school students tend to do well in areas such as mathematics that are not socially or economically influenced, private school students still outshine in Language Arts, History, and the Sciences. Merited or not, private school students are more frequently accepted to Ivy League colleges and statistically earn a higher income following college than public school students do. But, it has often been argued that public school students are better adjusted, and more prepared to navigate an increasingly exigent work force. In order to separate the fact from fiction, one must dig at the roots of the debate.
At the beginning of the twentieth century, America's Ivy League schools were brimming with the offspring of the social elite. College freshmen could expect to find themselves among the ranks of private school graduates from Andover, St. Paul's, and Exeter to name a few. But, during the twentieth century, the best universities made an effort to make their institutions more diverse and socially inclusive. The Scholastic Achievement Test (SAT) helped level the playing field but also exposed achievement gaps and difficulties within the public school system. At the close of the twentieth century, private school graduates still had the upper hand in regards to college acceptance and higher paying jobs. With public schools overcrowded and the public education system in crisis, why do so many parents opt for public education In most cases it is not a matter of choice, but a matter of finances.
The money required to cover private school tuition fees can be taxing, and many families simply cannot afford it. And, some families have ample resources, yet they choose to send their children to public schools. Why It is true that public school classrooms are generally larger, the student body is more diverse, and academic achievement requires greater effort than it would at a private school. But, public school demands that one learn to get along with a variety of people from different backgrounds. Success depends on a high degree of resolve and self-motivation. These are important lessons that build character. It is difficult for children to acquire these social skills in a private school where uniformity is encouraged and most students come from a privileged background. So, what is the big allure surrounding the recent middle-class Private School frenzy
Private schools generally represent the full range of current education advances, because they are self-regulated and free of local curriculum mandates. Because they are independent, private schools can provide a variety of instruction streamlined to fit a high standard of education. Private schools also attract talented teachers interested in learning-based curriculum and few discipline problems.
The debate forges on as the middle class weighs the educational options available for their children. While private school students continue to excel, it is important to remember that public schools were founded on values, theories, and skills that are central to democratic progress and community. As waves of students flock from public to private institutions, there is a concern that educational divides will further widen.
Works Cited
Clayton, Victoria. School Debate: Public Vs. Private. MSNBC. August 2, 2005.
http://www.msnbc.msn.com/id/8743221/&&CE=3088327 Read More
Share:
Tags
Cite this document
(“Public School Vs. Private School: An American Debate Essay”, n.d.)
Retrieved from https://studentshare.org/education/1518072-public-school-vs-private-school-an-american-debate

CHECK THESE SAMPLES OF Public School Vs. Private School: An American Debate

.... These are the results by the N.I.E Study that interschool academic competition does indeed tend to decrease school violence. This finding is very much relevant to the lingering private/public debate. But this also poses a hindrance in modern day teaching approaches in regards to academics. Schools and educators prefer not to induce competition into students but rather healthy, co-operative learning atmospheres. Ironically enough, it is the private schools which have argued that the older system of competition amongst students in education is useful indeed. Another finding of the N.I.E is that schools which are larger “tend to experience more violence and vandalism than smaller ones.” (West)The reason for this may be that private schools...
6 Pages(1500 words)Research Proposal

2. “The calm, deliberate composure with which he spoke of his late deeds and intentions, the expression of his fiendlike face when excited by enthusiasm, still bearing the stains of the blood...
9 Pages(2250 words)Assignment
sponsored ads
Save Your Time for More Important Things
Let us write or edit the essay on your topic "Public School Vs. Private School: An American Debate" with a personal 20% discount.
GRAB THE BEST PAPER

Let us find you another Essay on topic Public School Vs. Private School: An American Debate for FREE!