Comments (0)
Add to wishlistDelete from wishlist
Cite this document
Summary
The author of this assignment "Lesson Plan to Comprehend the First Law of Newton" highlights that the stress of the lesson will be on putting across the three key concepts of Inertia, Velocity, and Friction.  The primary mode of teaching must involve a brief biographical representation of Newton…
Download full paperFile format: .doc, available for editing
HIDE THIS PAPERGRAB THE BEST PAPER96.9% of users find it useful 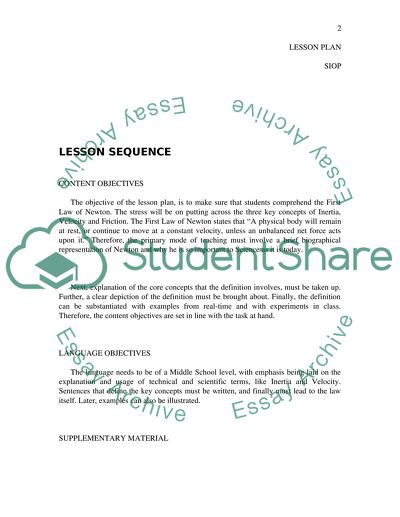 ﻿
LESSON SEQUENCE
CONTENT OBJECTIVES
The objective of the lesson plan, is to make sure that students comprehend the First Law of Newton. The stress will be on putting across the three key concepts of Inertia, Velocity and Friction. The First Law of Newton states that “A physical body will remain at rest, or continue to move at a constant velocity, unless an unbalanced net force acts upon it.” Therefore, the primary mode of teaching must involve a brief biographical representation of Newton and why he is so important to Science as it is today.
Next, explanation of the core concepts that the definition involves, must be taken up. Further, a clear depiction of the definition must be brought about. Finally, the definition can be substantiated with examples from real-time and with experiments in class. Therefore, the content objectives are set in line with the task at hand.
LANGUAGE OBJECTIVES
The language needs to be of a Middle School level, with emphasis being laid on the explanation and usage of technical and scientific terms, like Inertia and Velocity. Sentences that define the key concepts must be written, and finally must lead to the law itself. Later, examples can also be illustrated.
SUPPLEMENTARY MATERIAL
Charts and pictorial depictions of the law can be used. Besides this, an action of the real-life depiction can be done in class by getting groups of students to enact each example. This way, it drives home the concept, while also promoting team-building and bonding.
ADAPTATION OF CONTENT
The content must not be perceived from the sole purpose of explaining the law. It must invoke a genuine interest to learn about Newton. Besides this, the very pertinence of this law in day-to-day activities can help stress on the amalgamation of reality and science, and a confluence of the two.
SUMMARY
Thus, the preparation for the instruction of this class, must involve the proper portrayal of Newton and his laws. The first law must be explained with the help of key concepts. Then, real-life examples must be used to help students comprehend the concept clearly. Finally, active representation of the law can be portrayed in class.
REFERENCES
Website: http://www.siopinstitute.net
Making Content Comprehensible for English Learners: The SIOP Model, Second Edition, by Jana Echevarria, MaryEllen Vogt, and Deborah J. Short. Published by Allyn and Bacon.Copyright © 2004 by Pearson Education, Inc. Read More
Share:
Tags
Cite this document
(“Lesson Plan to Comprehend the First Law of Newton Assignment”, n.d.)
Lesson Plan to Comprehend the First Law of Newton Assignment. Retrieved from https://studentshare.org/education/1512457-lesson-plan-college-essay

“Lesson Plan to Comprehend the First Law of Newton Assignment”, n.d. https://studentshare.org/education/1512457-lesson-plan-college-essay.
Comments (0)
Click to create a comment or rate a document

Evandale’s mission would have a strong impact on the company’s later brand development.
When a company determines its mission and its vision, it needed to determine its objectives to accomplish that vision. I did not see the objectives—where the company was heading through in the presentation. A clear objective would have enabled me, as an audience to also picture where the company would want to go and would serve as the benchmark for me to assess the later strategic choices the company would state in the presentation.
According to the slides, the potential demand for caviar and the sturgeon products are “100x” bigger than the current supply. I would have wanted to see a reliable source for...

Thus, the advertisement placed by Adams in the local newspaper is an invitation to treat and not an offer, as per the case law discussed above. It is to be determined, whether Adam had formed legally binding contracts...
6 Pages(1500 words)Case Study
sponsored ads
Save Your Time for More Important Things
Let us write or edit the assignment on your topic "Lesson Plan to Comprehend the First Law of Newton" with a personal 20% discount.
GRAB THE BEST PAPER

Let us find you another Assignment on topic Lesson Plan to Comprehend the First Law of Newton for FREE!