Comments (0)
Add to wishlistDelete from wishlist
Cite this document
Summary
The author of the following essay "Comparison of Boston and Oxford" explains that Boston and Oxford are both famous cities for academic pursuit. Oxford city is situated in the South Eastern part of England, with a population of about 134 million people (2001 census)…
Download full paperFile format: .doc, available for editing
HIDE THIS PAPERGRAB THE BEST PAPER96.4% of users find it useful 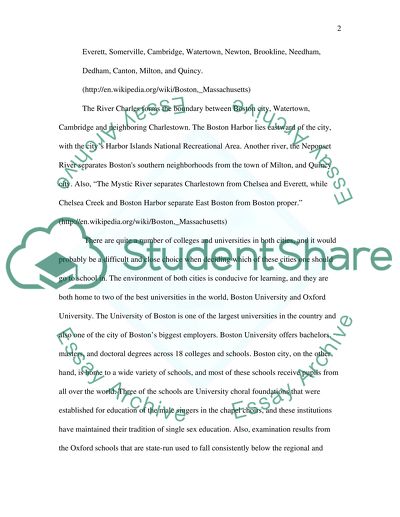 Extract of sample "Comparison of Boston and Oxford"

Boston and Oxford compare/contrast essay Introduction Boston and Oxford are both famous cities for academic pursuit. Oxford city is situated in the South Eastern part of England, with a population of about 134 million people (2001 census). The River Thames runs through the city for a distance of about 16 kilometers, and here the river is also known as The Isis. The buildings in Oxford city tend to reflect the English architectural period from the Saxons' arrival, as well as the Radcliffe Camera from the 18th century, which is the hub of the city. Oxford is also called "the city of dreaming spires". This name originated from the time of a poet named Matthew Arnold, and was a reference to the architectural harmony of Oxford's university buildings. The city of Boston on the other hand, has what could be described as a continental climate, such as is quite common in New England.
Summers are typically hot and humid, while winters are cold, windy and snowy. Prevailing wind patterns that blow offshore affect Boston, minimizing the influence of the Atlantic Ocean. Boston is surrounded by the "Greater Boston" region, and bordered by the cities and towns of Winthrop, Revere, Chelsea, Everett, Somerville, Cambridge, Watertown, Newton, Brookline, Needham, Dedham, Canton, Milton, and Quincy. (http://en.wikipedia.org/wiki/Boston,_Massachusetts)
The River Charles forms the boundary between Boston city, Watertown, Cambridge and neighboring Charlestown. The Boston Harbor lies eastward of the city, with the city's Harbor Islands National Recreational Area. Another river, the Neponset River separates Boston's southern neighborhoods from the town of Milton, and Quincy city. Also, "The Mystic River separates Charlestown from Chelsea and Everett, while Chelsea Creek and Boston Harbor separate East Boston from Boston proper." (http://en.wikipedia.org/wiki/Boston,_Massachusetts)
There are quite a number of colleges and universities in both cities, and it would probably be a difficult and close choice when deciding which of these cities one should go to school in. The environment of both cities is conducive for learning, and they are both home to two of the best universities in the world, Boston University and Oxford University. The University of Boston is one of the largest universities in the country and also one of the city of Boston's biggest employers. Boston University offers bachelors, masters, and doctoral degrees across 18 colleges and schools. Boston city, on the other hand, is home to a wide variety of schools, and most of these schools receive pupils from all over the world. Three of the schools are University choral foundations that were established for education of the male singers in the chapel choirs, and these institutions have maintained their tradition of single sex education. Also, examination results from the Oxford schools that are state-run used to fall consistently below the regional and national average. However, results in the city of Boston are showing a lot of improvement recently.

Conclusion
In conclusion, it can be said that both Oxford and Boston city receive many students from all around the world, and both cities have a rich tradition of education of students from abroad. The climate in Oxford though, might be more comfortable and thus more conducive for learning.

CHECK THESE SAMPLES OF Comparison of Boston and Oxford

The Chandler Kamart pharmacy is a very busy pharmacy with three full-time pharmacists and 8 pharmacy assistants working in one shift. With...

Austria or you may call is the Republic of Austria in official terminology is located in Central Europe. Although the population figures do not touch the danger limit but the talent and resources are worthwhile there. Germany and Hungry are also near this region. Italy is in the south of Austria. Switzerland will be seen in the west. So, now you can realize the importance of this region clearly.
The GDP is also impressive here. You can say the economy is strong and it has much depth. The strong social market economy is the result of development and proper management by the government (DArt & Turner 2008). Traders find flexibility in business operations. Labor has a positive approach to work and jobs.
There was a tren...

9 Pages(2250 words)Term Paper
sponsored ads
Save Your Time for More Important Things
Let us write or edit the essay on your topic "Comparison of Boston and Oxford" with a personal 20% discount.
GRAB THE BEST PAPER

Let us find you another Essay on topic Comparison of Boston and Oxford for FREE!