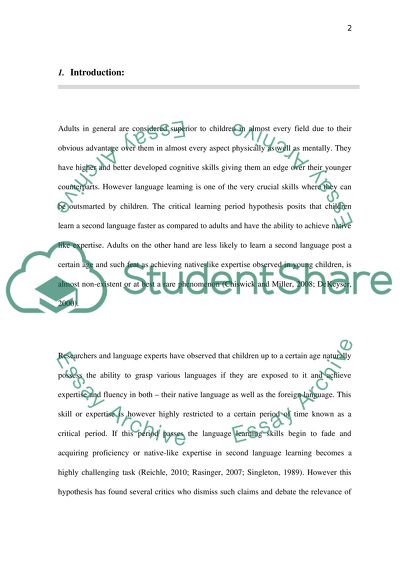 Download file to see previous pages They have higher and better developed cognitive skills giving them an edge over their younger counterparts. However language learning is one of the very crucial skills where they can be outsmarted by children. The critical learning period hypothesis posits that children learn a second language faster as compared to adults and have the ability to achieve native like expertise. Adults on the other hand are less likely to learn a second language post a certain age and such feat as achieving native-like expertise observed in young children, is almost non-existent or at best a rare phenomenon (Chiswick and Miller, 2008; DeKeyser, 2000). Researchers and language experts have observed that children up to a certain age naturally possess the ability to grasp various languages if they are exposed to it and achieve expertise and fluency in both – their native language as well as the foreign language. This skill or expertise is however highly restricted to a certain period of time known as a critical period. If this period passes the language learning skills begin to fade and acquiring proficiency or native-like expertise in second language learning becomes a highly challenging task (Reichle, 2010; Rasinger, 2007; Singleton, 1989). However this hypothesis has found several critics who dismiss such claims and debate the relevance of the hypothesis (Nikolov, 2000; Hornberger and Corson, 1997; Ioup et al., 1994; Scovel, 2000). This study aims to assess, explore and analyse the credibility of the ‘critical period hypothesis’ and ascertain the impact, role, and implications of this period in second language acquisition via a comprehensive study of literature available on the subject. 1.1. Thesis statement: Competence in all spheres of human life is usually expected to increase and improve gradually over time and individuals are known to achieve expertise in various skills over the course of their lives. However certain skills such as language learning for instance, are restricted to a certain critical period whereby it is claimed that L2 proficiency is best achieved before this 'critical period' since unlike other skills it is known to fade over time, thus implying that children are better equipped to achieve L2 proficiency as compared to adults. 1.2. Research objectives: The key objective of this study includes: To examine the relevance of critical period with respect to acquiring language learning skills among children and adults To ascertain whether children have superiority in language learning as compared to adults and whether such ability is dependent on a specific learning period. To examine the various factors such as biological, psychological, environmental, etc and assess its impact on second language acquisition. 1.3. Research problems: Being an English teacher in Saudi Arabia, I have often observed the various learning patterns of learners of English as a second language. Some of the key problems discussed as a part of this study include the following: Is there a substantial difference between adults and children with respect to second language acquisition? In what aspects does the critical period affect second language acquisition among individuals? Is there a common consensus among researchers with regard to relevance and credibility of the critical period hypothesis and its impact on second language acquisition among children and adults? Whether the decline in language learning abilities is the consequence of maturational factors or cognitive factors or any ...Download file to see next pagesRead More
Share:
Tags
Cite this document
(“Research perspectives Essay Example | Topics and Well Written Essays - 2750 words”, n.d.)
Retrieved from https://studentshare.org/education/1479600-research-perspectives
(Research Perspectives Essay Example | Topics and Well Written Essays - 2750 Words)
https://studentshare.org/education/1479600-research-perspectives.
“Research Perspectives Essay Example | Topics and Well Written Essays - 2750 Words”, n.d. https://studentshare.org/education/1479600-research-perspectives.
Comments (0)
Click to create a comment or rate a document

CHECK THESE SAMPLES OF Research perspectives

The emergence of post-modern society was in a way fueled by the failures of modernism. For example, the postmodern society views climate change and the occurrence of various ailments as a result of modernity. Industries led to environmental pollution and degradation of natural resources that supported life.

Noah (2003 p 47) observes that the post-modern society began in the 21st century whereby knowledge was applied for personal development rather than for enlightenment. For example, learners in the post-modern society are less focused on theories that give them knowledge regarding particular issues in nature, from which they can not derive monetary value for their existence. In this view, knowledge has been commoditize...
7 Pages(1750 words)Essay

It is quite common in society to find a child abusive family, sibling abuse, dating abuse, parent abuse and even spouse abuse. Therefore, the question about violent behavior in the family can be difficult to answer. First, it would be quite important to identify what constitutes family violence. In as much as the definitional consensus might be achieved, the fact remains that acts of family violence mostly happen behind closed doors which means that the activities remain hidden sometimes, ignored or hidden. Violent behaviors among most families will mean poor upbringing of its members and in this case, the children in the family. The family remains an important source for the growth of the children in society therefore; whatever h...
7 Pages(1750 words)Assignment
sponsored ads
Save Your Time for More Important Things
Let us write or edit the essay on your topic "Research perspectives" with a personal 20% discount.
GRAB THE BEST PAPER

Let us find you another Essay on topic Research perspectives for FREE!