Comments (0)
Add to wishlistDelete from wishlist
Cite this document
Summary
In any business activity, political organization, family, hospital, or even educational institute there is a need for an active leader to appear. A leader is supposed to provide give quality leadership for his fellow workers and subordinates…
Download full paperFile format: .doc, available for editing
HIDE THIS PAPERGRAB THE BEST PAPER91.5% of users find it useful 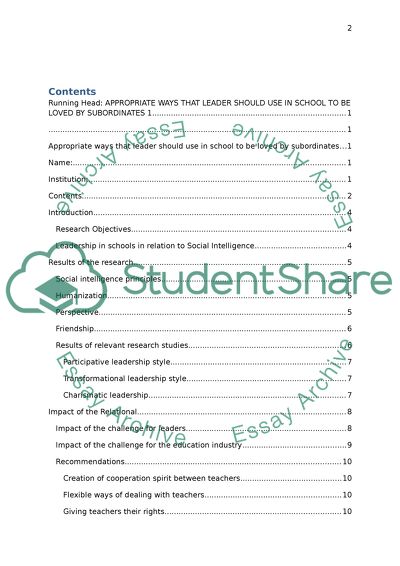 Download file to see previous pages Some people can use ideas to inspire others and this can be a good way for making people respect and love one as a leader. Therefore, the success of any leader is the establishment of good relationship with the subordinate. This is especially important when dealing with an education system where the leader is mainly the principle and the subordinates are the teachers. In many cases, leadership is a tool that is used in an institution to modify behaviour. This is because it helps to determine the goals of the organization as well as objectives expected. This means that the willingness of individuals to follow a person is what makes them a leader. Therefore in any leaning institution, success will mainly depend on the leadership style to be used by the head teacher. Therefore, the main focus of this paper is to find out the most appropriate ways the school leaders can use in order to gain favour from the subordinates.
Research Objectives
To review leadership styles successful in schools
To examine the most effective leadership styles and how they affect the relationship among subordinates in the school.
To review and interpret various leadership models adequate enough to run a school
Leadership in schools in relation to Social Intelligence It is important to understand the meaning of the different terms used. Leadership is a complex term to explain. This is because in the traditional setup, leadership is used to bring about respect, teamwork and obedience. Leadership can also be defined as an influence that makes people act in a particular manner. On the other hand social intelligence is basically the ability to understand as well as manage people to act wisely in human relations (Goleman, 2006). This is because this is a factor that mainly affects people’s behaviours and interaction. Therefore, in the case of a school administrator and the subordinates, there is a huge relationship between the applicable leadership styles to social intelligence. This is because for a leader to be loved and respected by the subordinate, then one must also be able to understand the people and also interact with them without any difficulties. Results of the research Social intelligence principles There are numerous social intelligence and leadership principals that are applicable in the case of school leaders and their subordinates. Social intelligence is the ability to get along with others and also get them to cooperate with you. These principals are discussed herein. Humanization Social intelligence needs people to recognize humanity in others. This is a crucial aspect in leadership because people are supposed to be aware of what other people are capable. Therefore for a school administrator who needs to be loved by his subordinate, it is important to make sure that he considered other people’s feelings and also shun away from manipulating the subordinates. ...Download file to see next pagesRead More
Share:
Tags
Cite this document
(“Appropriate Ways That Leader Should Use In School To Be Loved By Research Paper”, n.d.)
Appropriate Ways That Leader Should Use In School To Be Loved By Research Paper. Retrieved from https://studentshare.org/education/1474486-what-are-the-appropriat-ways-that-leader-shoul-use

“Appropriate Ways That Leader Should Use In School To Be Loved By Research Paper”, n.d. https://studentshare.org/education/1474486-what-are-the-appropriat-ways-that-leader-shoul-use.
Comments (0)
Click to create a comment or rate a document

Technology...
10 Pages(2500 words)Essay
sponsored ads
Save Your Time for More Important Things
Let us write or edit the research paper on your topic "Appropriate Ways That Leader Should Use In School To Be Loved By Subordinates" with a personal 20% discount.
GRAB THE BEST PAPER

Let us find you another Research Paper on topic Appropriate Ways That Leader Should Use In School To Be Loved By Subordinates for FREE!