Comments (0)
Add to wishlistDelete from wishlist
Cite this document
Summary
Family Influences in Relationship Building Full name University name John Doe was raised in a military family and with that, he says he had no choice where he was supposed to live, for how long he would stay in a place or who became his neighbors. As such, he was taught that everyone is a neighbor and a friend…
Download full paperFile format: .doc, available for editing
HIDE THIS PAPERGRAB THE BEST PAPER91.2% of users find it useful 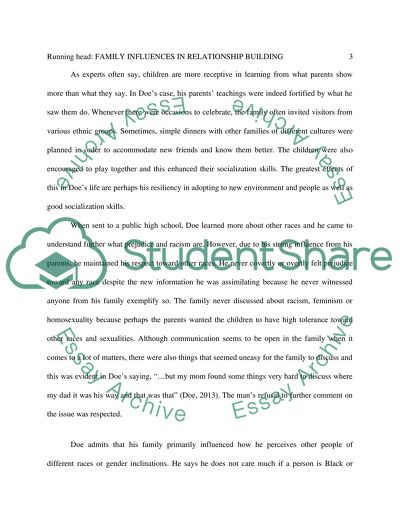 Download file to see previous pages The family had to move from place to place every two years and this demanded them to be resilient and easily adjust to their environment as well as the people around them. Growing up in a military family, John Doe was exposed to a lot of friends wherein most of them also belong to military families. He had White and Black American as well as Asian friends and others from cultural groups, too. “I was raised without prejudice to anyone” (Doe, 2013), the young man said quite contentedly and smiled. He added that his parents never discouraged him to play with other children from a different race. However, when he was bullied or if he met trouble-makers, his parents suggested for him to just stay away from them. Doe’s parents expressed these information verbally to him and his siblings early on perhaps because they know they were expected to meet different kinds of people. Moreover, as any parent does, the Doe couple also warned the children not to speak with strangers for their safety. Explaining was the basic manner the parents used to inform their children about the facts of life. Although the Doe children were taught not to have any prejudice to anyone, they were also taught to be careful with the people they do not know. As experts often say, children are more receptive in learning from what parents show more than what they say. In Doe’s case, his parents’ teachings were indeed fortified by what he saw them do. Whenever there were occasions to celebrate, the family often invited visitors from various ethnic groups. Sometimes, simple dinners with other families of different cultures were planned in order to accommodate new friends and know them better. The children were also encouraged to play together and this enhanced their socialization skills. The greatest effects of this in Doe’s life are perhaps his resiliency in adopting to new environment and people as well as good socialization skills. When sent to a public high school, Doe learned more about other races and he came to understand further what prejudice and racism are. However, due to his strong influence from his parents, he maintained his respect toward other races. He never covertly or overtly felt prejudice toward any race despite the new information he was assimilating because he never witnessed anyone from his family exemplify so. The family never discussed about racism, feminism or homosexuality because perhaps the parents wanted the children to have high tolerance toward other races and sexualities. Although communication seems to be open in the family when it comes to a lot of matters, there were also things that seemed uneasy for the family to discuss and this was evident in Doe’s saying, “…but my mom found some things very hard to discuss where my dad it was his way and that was that” (Doe, 2013). The man’s refusal to further comment on the issue was respected. Doe admits that his family primarily influenced how he perceives other people of different races or gender inclinations. He says he does not care much if a person is Black or Asian, gay or straight. However, he has this take on every child; that they all deserve to have parents of both sexes. He further says that children get the “bad rap due to the race they are” and in a similar manner, children who have unique parents, meaning two females or two males, receive the same treatment. Although Doe does not inflict such kind of bullying toward other people, he claims ...Download file to see next pagesRead More
Share:
Tags
Cite this document
(“Interview-Family Influence Assignment Example | Topics and Well Written Essays - 750 words”, n.d.)
Interview-Family Influence Assignment Example | Topics and Well Written Essays - 750 words. Retrieved from https://studentshare.org/education/1472462-interview-family-influence
(Interview-Family Influence Assignment Example | Topics and Well Written Essays - 750 Words)
Interview-Family Influence Assignment Example | Topics and Well Written Essays - 750 Words. https://studentshare.org/education/1472462-interview-family-influence.
“Interview-Family Influence Assignment Example | Topics and Well Written Essays - 750 Words”, n.d. https://studentshare.org/education/1472462-interview-family-influence.
Comments (0)
Click to create a comment or rate a document

CHECK THESE SAMPLES OF Interview-Family Influence

The United Nations added additional descriptions to the definition of NGO’s, such as the membership of citizens from different countries with a collective goal or advocacy in the communities or kinds of communities that these NGO’s operate in (Simmons, 1998, p.83). The existence of such groups has been recorded for many years, and as long as there are states, republics, countries, or sovereigns being made, it would be expected that there would be NGO’s that would rise alongside them.
While in the beginning, these independent groups do not exert any strong influence over the way the ruling parties run the country and its people, it was during the establishment of the United Nations that the strength of such o...
8 Pages(2000 words)Term Paper
sponsored ads
Save Your Time for More Important Things
Let us write or edit the assignment on your topic "Interview-Family Influence" with a personal 20% discount.
GRAB THE BEST PAPER

Let us find you another Assignment on topic Interview-Family Influence for FREE!