Comments (1)
Add to wishlistDelete from wishlist
Cite this document
Summary
The following essay "Teaching Philosophy" deals with teaching matters. As the author puts it, "As the semester progressed I became more and more familiar with the various schools of thought pertaining to the philosophy of teaching"…
Download full paperFile format: .doc, available for editing
HIDE THIS PAPERGRAB THE BEST PAPER93.1% of users find it useful 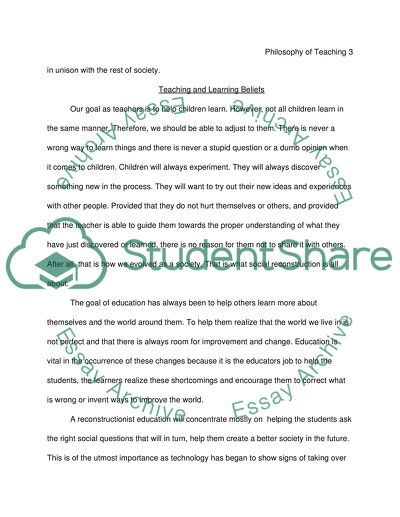 Download file to see previous pages Our goal as teachers is to help children learn. However, not all children learn in the same manner. Therefore, we should be able to adjust to them. There is never a wrong way to learn things and there is never a stupid question or a dumb opinion when it comes to children. Children will always experiment. They will always discover something new in the process. They will want to try out their new ideas and experiences with other people. Provided that they do not hurt themselves or others, and provided that the teacher is able to guide them towards the proper understanding of what they have just discovered or learned, there is no reason for them not to share it with others. After all, that is how we evolved as a society.
The goal of education has always been to help others learn more about themselves and the world around them. To help them realize that the world we live in is not perfect and that there is always room for improvement and change. Education is vital in the occurrence of these changes because it is the educator's job to help the students, the learners realize these shortcomings and encourage them to correct what is wrong or invent ways to improve the world.
A reconstructionist education will concentrate mostly on helping the students ask the right social questions that will, in turn, help them create a better society in the future. This is of the utmost importance as technology has begun to show signs of taking over the real world by encouraging people to engage in virtual relationships. A mode of interacting that does nothing to help improve our society because people hide behind the cloak of anonymity in it. At present, technology stands as the enemy of education as people tend to misuse the available technology in an effort to undermine others in our society. But a reconstructionist educational platform will be geared towards using technology in the advancement of the brotherhood of men. It will in effect, create a new school of thought that will allow people to create a more peaceful and open minded society in the future. ...Download file to see next pagesRead More
Share:
Tags
Cite this document
(“Teaching Philosophy Essay Example | Topics and Well Written Essays - 750 words”, n.d.)
Retrieved from https://studentshare.org/education/1462373-teaching-philosophy-statement
(Teaching Philosophy Essay Example | Topics and Well Written Essays - 750 Words)
https://studentshare.org/education/1462373-teaching-philosophy-statement.
“Teaching Philosophy Essay Example | Topics and Well Written Essays - 750 Words”, n.d. https://studentshare.org/education/1462373-teaching-philosophy-statement.
Comments (1)
Click to create a comment or rate a document

ha
hartmanngeraldi added comment 7 months ago
Student rated this paper as
At first, I thought 3 of pages is too much for such a question. But now I see it could not be done smarter. As the author starts you see the complexity of the issue. I’ve read all at once. Great sample

CHECK THESE SAMPLES OF Teaching Philosophy

“Language occurs through an interaction among genes (which hold innate tendencies to communicate and be sociable), environment, and the child’s own thinking abilities” (Genishi, 2006). But just how does this happen? How do children learn to use sounds to communicate and then to place those sounds in the correct order to make themselves understood? While some of this behavior can be attributed to the imitation of the caregivers, there remain aspects to the development of language and communication that cannot be so easily explained. To provide a more complete understanding of how language and communication develop in the young child, it is necessary to understand not only the primary terms that are applied, but al...
12 Pages(3000 words)Case Study
sponsored ads
Save Your Time for More Important Things
Let us write or edit the essay on your topic "Teaching Philosophy" with a personal 20% discount.
GRAB THE BEST PAPER

Let us find you another Essay on topic Teaching Philosophy for FREE!