Comments (0)
Add to wishlistDelete from wishlist
Cite this document
Summary
Education: Ethical Leadership Report Education: Ethical Leadership Report Description of the Incident As an assistant principal of a remote Catholic school, I was asked to attend parent meetings with the principal and different parents to discuss incidents which have occurred between children and a teacher who was on playground duty…
Download full paperFile format: .doc, available for editing
HIDE THIS PAPERGRAB THE BEST PAPER96.4% of users find it useful 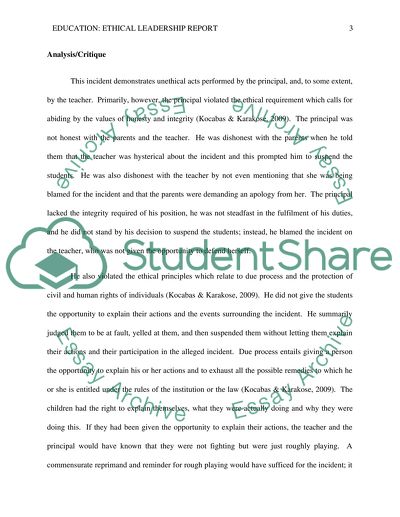 Download file to see previous pages Without asking the children about the incident, what they were doing and why they were fighting, the principal proceeded to yell at them and then immediately suspended them for three days. The children were later sent home. The parents contacted the school and demanded a meeting with the principal. The parents explained that the children were not fighting and that the teacher Mrs. Fenton did not listen to the children. The principal blamed the teacher for the incident and explained that the teacher was hysterical about the incident and this caused her to suspend the students. The suspension was then cancelled but the children were not allowed to play at the playground for 2 days. The parents also demanded an apology from the teacher, but the teacher was never informed that she was blamed for the incident. As a result, the parents never received their apology. After confronting the principal about her lying to the parents, I reported the incident to the head office and allowed the head office to take appropriate action in response to the principal’s behaviour and lack of leadership skills. I never mentioned the incident to the teacher. Analysis/Critique This incident demonstrates unethical acts performed by the principal, and, to some extent, by the teacher. Primarily, however, the principal violated the ethical requirement which calls for abiding by the values of honesty and integrity (Kocabas & Karakose, 2009). The principal was not honest with the parents and the teacher. He was dishonest with the parents when he told them that the teacher was hysterical about the incident and this prompted him to suspend the students. He was also dishonest with the teacher by not even mentioning that she was being blamed for the incident and that the parents were demanding an apology from her. The principal lacked the integrity required of his position, he was not steadfast in the fulfilment of his duties, and he did not stand by his decision to suspend the students; instead, he blamed the incident on the teacher, who was not given the opportunity to defend herself. He also violated the ethical principles which relate to due process and the protection of civil and human rights of individuals (Kocabas & Karakose, 2009). He did not give the students the opportunity to explain their actions and the events surrounding the incident. He summarily judged them to be at fault, yelled at them, and then suspended them without letting them explain their actions and their participation in the alleged incident. Due process entails giving a person the opportunity to explain his or her actions and to exhaust all the possible remedies to which he or she is entitled under the rules of the institution or the law (Kocabas & Karakose, 2009). The children had the right to explain themselves, what they were actually doing and why they were doing this. If they had been given the opportunity to explain their actions, the teacher and the principal would have known that they were not fighting but were just roughly playing. A commensurate reprimand and reminder for rough playing would have sufficed for the incident; it did not deserve suspension and harsh words from the principal. The incident did not even sufficiently merit a visit to the principal’s office. The incident provides a situation where I was able to apply my personal and ethical judgment in relation to the issue. I was able to first assess the issue and then to evaluate if the ...Download file to see next pagesRead More
Share:
Tags
Cite this document
(“Education: Ethical Leadership Report Essay Example | Topics and Well Written Essays - 2000 words”, n.d.)
Education: Ethical Leadership Report Essay Example | Topics and Well Written Essays - 2000 words. Retrieved from https://studentshare.org/education/1457129-edle
(Education: Ethical Leadership Report Essay Example | Topics and Well Written Essays - 2000 Words)
Education: Ethical Leadership Report Essay Example | Topics and Well Written Essays - 2000 Words. https://studentshare.org/education/1457129-edle.
“Education: Ethical Leadership Report Essay Example | Topics and Well Written Essays - 2000 Words”, n.d. https://studentshare.org/education/1457129-edle.
Comments (0)
Click to create a comment or rate a document

How Smart Phones are the New PC

Eating in Sociological Perspective and Culture in Every Day Life

...Introduction General Electric is certainly no longer what it was a few years ago under the dynamic and hard-driving leadership of Jack Welch. G.E. has a market cap of $169 billion but it had made huge bets in the financial sector which is not doing exactly very well for the last few years. As a result of this wrong bet, it is now scrambling to sell some assets and diverting cash away from dividends (Cox & Cyran, NYT). This is symptomatic of what seems wrong with G.E. today which is beginning to look like a poor shadow of its former self. It had been often compared to one of its rivals that can approximate G.E.s range of businesses in the aerospace, power generation and infrastructure sectors but with strong financial statements...
12 Pages(3000 words)Report
sponsored ads
Save Your Time for More Important Things
Let us write or edit the essay on your topic "Education: Ethical Leadership Report" with a personal 20% discount.
GRAB THE BEST PAPER

Let us find you another Essay on topic Education: Ethical Leadership Report for FREE!