Comments (0)
Add to wishlistDelete from wishlist
Cite this document
Summary
Leadership Styles: Their Impact on Effective Development of Faculty Members at Universities Introduction Leadership is an essential factor in all kinds of organisation (Jing and Avery, 2008). The central role of leaders in the dynamism of the organisation is a fundamental truism…
Download full paperFile format: .doc, available for editing
HIDE THIS PAPERGRAB THE BEST PAPER95.3% of users find it useful 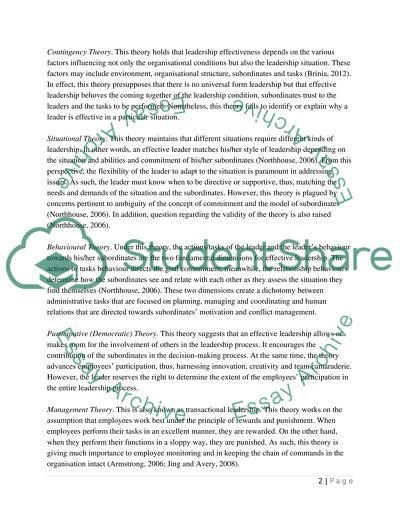 Download file to see previous pages 669). In this context, this paper will look into the different types of leadership theories and assess it by looking into some empirical studies relevant to the impact of leadership on the development of faculty members. In the end, hopefully, this paper may help gain an understanding of the different identified types of leadership. The Different Kinds of Leadership In order to understand further the concept of leadership, scholars have continuously defined, examine and refine the concept (Yukl, 2006). As a result of these scholarly endeavours, several types of leadership and leadership theories have been developed (Brinia, 2012). Some of the types of leadership are the following: “Great Man” Theory. This theory assumes that leadership is inherent to the person. This means that capacity in becoming a leader is naturally inborn in the person. Thus, giving validity to the claim “a person is born leader” (Brinia, 2012). This theory is also known as the superhero theory. Moreover, the theory refers only to ‘men’ as it looks into the ‘feats’ of illustrious men in history such as Mahatma Gandhi, Abraham Lincoln, Steve Jobs and the likes. As such, it presents the notion that great leadership entails having the right man for the job. However, this theory is criticised by Spencer (1896) when he claimed that leaders are not borne but are themselves product of their society. Trait Theory. This theory is comparable with the ‘great man theory’. It holds the view that ‘natural leaders’ possess certain attributes that distinguish them from the rest. These attributes include “intelligence, alertness, insight, responsibility, initiative, persistence, self-confidence and sociability” (Northhouse, 2006, pp. 16). These characteristics provide some advantages to leaders over non-leaders, thus making them suitable as leaders. However, this theory has been questioned on the premise that there are people who possess these attributes but are not leaders. Contingency Theory. This theory holds that leadership effectiveness depends on the various factors influencing not only the organisational conditions but also the leadership situation. These factors may include environment, organisational structure, subordinates and tasks (Brinia, 2012). In effect, this theory presupposes that there is no universal form leadership but that effective leadership behoves the coming together of the leadership condition, subordinates trust to the leaders and the tasks to be performed. Nonetheless, this theory fails to identify or explain why a leader is effective in a particular situation. Situational Theory. This theory maintains that different situations require different kinds of leadership. In other words, an effective leader matches his/her style of leadership depending on the situation and abilities and commitment of his/her subordinates (Northhouse, 2006). From this perspective, the flexibility of the leader to adapt to the situation is paramount in addressing issues. As such, the leader must know when to be directive or supportive, thus, matching the needs and demands of the situation and the subordinates. However, this theory is plagued by concerns pertinent to ambiguity of the concept of commitment and the model of subordinates (Northhouse, 2006). In addition, question regarding the validity of the theory is also raised (Northhouse, ...Download file to see next pagesRead More
Share:
Tags
Cite this document
(“Leadership styles Coursework Example | Topics and Well Written Essays - 1000 words”, n.d.)
Retrieved from https://studentshare.org/education/1452943-leadership-theories-previous-empirical-study-about
(Leadership Styles Coursework Example | Topics and Well Written Essays - 1000 Words)
https://studentshare.org/education/1452943-leadership-theories-previous-empirical-study-about.
“Leadership Styles Coursework Example | Topics and Well Written Essays - 1000 Words”, n.d. https://studentshare.org/education/1452943-leadership-theories-previous-empirical-study-about.
Comments (0)
Click to create a comment or rate a document

CHECK THESE SAMPLES OF Leadership styles

According to Burns (1978) and Bass (1985), transformational leadership has a set of category constructs such as values, morals, farsightedness, long term goals, principles, acute awareness about the dividing line between causes and symptoms, mission statements, strategic perspectives, and human resources. Similarly, they identify a set of category constructs in the transactional leadership also. For instance concentration on the task at hand, short term goals and tactics, confusion co...
6 Pages(1500 words)Coursework
sponsored ads
Save Your Time for More Important Things
Let us write or edit the coursework on your topic "Leadership styles" with a personal 20% discount.
GRAB THE BEST PAPER

Let us find you another Coursework on topic Leadership styles for FREE!