Comments (0)
Add to wishlistDelete from wishlist
Cite this document
Summary
Gender differences in academic underachievement Abstract This paper studies underachievement among boys in the different levels in school. It is found that underachievement is considered as a problem among boys and there is a need for intervention to motivate for higher participation and performance…
Download full paperFile format: .doc, available for editing
HIDE THIS PAPERGRAB THE BEST PAPER93.7% of users find it useful 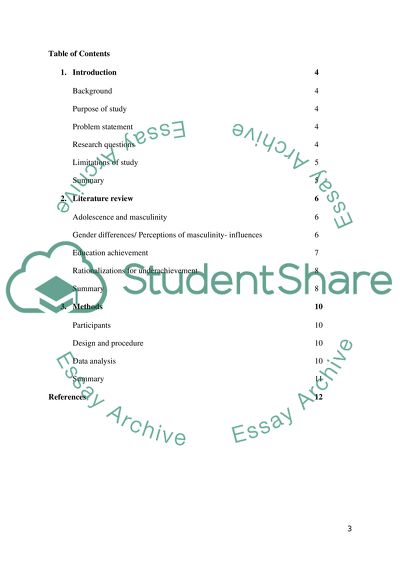 Download file to see previous pages Methods 10 Participants 10 Design and procedure 10 Data analysis 10 Summary 11 References 12 1. Introduction Background Secondary and high school students in US, UK and other countries have been witnessing an increasing drop in educational achievement of boys when compared to girls. In some of the school settings, research has found that girls outperformed boys in English more than in other subjects (Bush, 2005). While there may be many reasons for underachievement of both, it is more prevalent with performance of boys rather than that of girls. More boys who underachieve in GCSE test in the UK are found to fail or underachieve in the elementary too. It is likely that boys are four times prone to underachieve than girls of the same age. There is an ‘anti-education culture’ (Paton, 2007) gaining acceptance among ‘the lads’, particularly in the working class boys who develop a ‘counter-school culture’ in terms of ‘hegemonic masculinity’ in which the teachers are also found to be accomplices to an extent (Abraham, 2008). Patterns of interaction among underachieving boys and girls are also similar as boys tend to develop anti-education culture more prominent in the early years while girls develop similar behavioural traits at later stages (Myhill, 2002). A study by AUT University in Auckland reveals that more teenage boys, as high as 72 percent, are underachieving and are over-represented in suspension and stand down rates than girls. Also, 10 percent more of girls are entering university when compared to boys (Boys underachieving in school and overrepresented in suspensions, 2009). Although, there has been a general disparity between girls and boys attending primary education in many countries across the globe, over the last three decades, the intervention of Commonwealth has ensured equality in education and gender parity. This has led to increased participation among girls on par with boys. However, underachievement in education by boys is a serious concern faced by almost all countries and is inevitably compared with participation and performance of girls (Jha and Kelleher, 2006). Need for the Study Motivation techniques for underachieving students, which section, is dominated by boys are to be identified to tackle the problem of underachievement in education by boys. It may be that the issue of underachievement is blown out of proportion by a section of the organization or media but the problem remains. Several researchers have tried to understand the reasons behind the anti-education culture exhibited by boys but somewhere down the line, there is a lack of clarity on the nature of problem and the necessary remedies that need to be included in addressing the issue on hand. Statement of the Problem The purpose of this study is to understand the reasons behind underachievement in education by boys. It is to be understood at what stage, boys who underachieve start to show behavioural or performance symptoms. Gender differences and their influencing factors will also have to be related to understand the anti-education culture that boys are found to exhibit. It is also important to understand what solutions can be obtained in this regard and to what extent are they measureable. Limitations This study is limited in scope as it focuses on understanding gender differences and differences in educational performance in the different levels or forms. Although reasons for ...Download file to see next pagesRead More
Share:
Tags
Cite this document
(“Gender Differences in Academic Underachievement Research Paper”, n.d.)
Retrieved from https://studentshare.org/education/1447842-research-proposal-literature-review-qualitative
(Gender Differences in Academic Underachievement Research Paper)
https://studentshare.org/education/1447842-research-proposal-literature-review-qualitative.
“Gender Differences in Academic Underachievement Research Paper”, n.d. https://studentshare.org/education/1447842-research-proposal-literature-review-qualitative.
Comments (0)
Click to create a comment or rate a document

CHECK THESE SAMPLES OF Gender Differences in Academic Underachievement

“Being gay” page has 164,187 likes and is an open access page which defines what homosexuality is and what are the benefits or adv...
7 Pages(1750 words)Assignment
sponsored ads
Save Your Time for More Important Things
Let us write or edit the research paper on your topic "Gender Differences in Academic Underachievement" with a personal 20% discount.
GRAB THE BEST PAPER

Let us find you another Research Paper on topic Gender Differences in Academic Underachievement for FREE!