A Report On Observation - Assignment Example

Comments (0)
Add to wishlistDelete from wishlist
Cite this document
Summary
A Report on Observation Name Institution Abstract Early childcare programs provide formal teaching and basic care of young children in settings away from their parents and homes. The children in these institutions are mostly between early childhoods to eight years of age…
Download full paperFile format: .doc, available for editing
HIDE THIS PAPERGRAB THE BEST PAPER92.7% of users find it useful 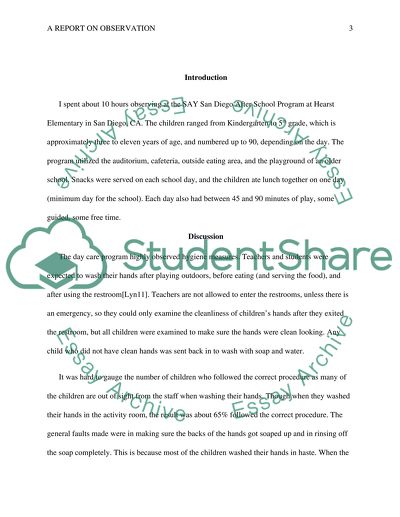 Extract of sample "A Report On Observation"

Download file to see previous pages Introduction I spent about 10 hours observing at the SAY San Diego After School Program at Hearst Elementary in San Diego, CA. The children ranged from Kindergarten to 5th grade, which is approximately three to eleven years of age, and numbered up to 90, depending on the day. The program utilized the auditorium, cafeteria, outside eating area, and the playground of an older school. Snacks were served on each school day, and the children ate lunch together on one day (minimum day for the school). Each day also had between 45 and 90 minutes of play, some guided, some free time. Discussion The day care program highly observed hygiene measures. Teachers and students were expected to wash their hands after playing outdoors, before eating (and serving the food), and after using the restroom (Marotz, Cross, & Rush, 2011). Teachers are not allowed to enter the restrooms, unless there is an emergency, so they could only examine the cleanliness of children’s hands after they exited the restroom, but all children were examined to make sure the hands were clean looking. Any child who did not have clean hands was sent back in to wash with soap and water. It was hard to gauge the number of children who followed the correct procedure as many of the children are out of sight from the staff when washing their hands. Though when they washed their hands in the activity room, the result was about 65% followed the correct procedure. The general faults made were in making sure the backs of the hands got soaped up and in rinsing off the soap completely. This is because most of the children washed their hands in haste. When the children were being observed in this room, they were reminded of the correct way of washing their hands by observing their teachers of who always used the correct procedure (Marotz, Cross, & Rush, 2011). The school does not have access to warm water as all the taps are of cold water. The program cannot fix this fault. There were no children in diapers as most of the young children were old enough to use the restroom under the supervision of their teachers. The program and facility do a fantastic job on attempting to prevent infections. The school has two full-time custodians, who clean the areas inside and around the program. The workers cleaned all the surfaces that the children worked, played, and ate on. This they always did before the program opened. They did the same after they are used by the children. Each teacher also carries a first aid pack with him or her at all times. I only saw one child who needed a Band-Aid. Because of the rules and regulations handed down to the program by its parent non-profit committee and the school district that owns the facility, teachers are only allowed to put a Band-Aid on a child. They cannot help clean any wound, and they cannot put any medication on the area if it is not prescribed by a physician (Marotz, Cross, & Rush, 2011). I believe this could be fixed if the program could afford a nurse on duty at all times, but unless the parents of the children decided to pay for it, that will not happen. The youngest children are kindergarteners, and all students in the program are expected to be potty trained. Teachers are always with children at the bathrooms, but they never go in with the children. I saw no safety issues that were out of the ordinary for the children during school time. They played on an asphalt playground that had dirt and sand that had blown on to it, so there was a slipping ...Download file to see next pagesRead More
Share:
Tags
Cite this document
(“A Report On Observation Assignment Example | Topics and Well Written Essays - 750 words”, n.d.)
Retrieved from https://studentshare.org/education/1444209-observation
(A Report On Observation Assignment Example | Topics and Well Written Essays - 750 Words)
https://studentshare.org/education/1444209-observation.
“A Report On Observation Assignment Example | Topics and Well Written Essays - 750 Words”, n.d. https://studentshare.org/education/1444209-observation.
Comments (0)
Click to create a comment or rate a document

CHECK THESE SAMPLES OF A Report On Observation

The Case of Watsons and H&M Consulting

Relationship Between Land Use and Transportation in European Cities

How to Put On a Coat

Ethics and Law in Health Care

Descartes and the Existence of Evil Demon

Policies and Practice in Health: Diabetes

Analysis of Escaping Salem: The Other Witch Hunt of 1692 by Richard Goldbeer

Health and Safety Legislation in the UK

7 Pages(1750 words)Coursework
sponsored ads
Save Your Time for More Important Things
Let us write or edit the assignment on your topic "A Report On Observation" with a personal 20% discount.
GRAB THE BEST PAPER

Let us find you another Assignment on topic A Report On Observation for FREE!