Comments (0)
Add to wishlistDelete from wishlist
Cite this document
Summary
This essay concerns the Australian education sector, in which the shortage has emerged as a significant and increasing problem in the country with a number of solutions being put in place to address the problem. Besides, the shortages have been experienced in various industries and sectors of the economy…
Download full paperFile format: .doc, available for editing
HIDE THIS PAPERGRAB THE BEST PAPER98.6% of users find it useful 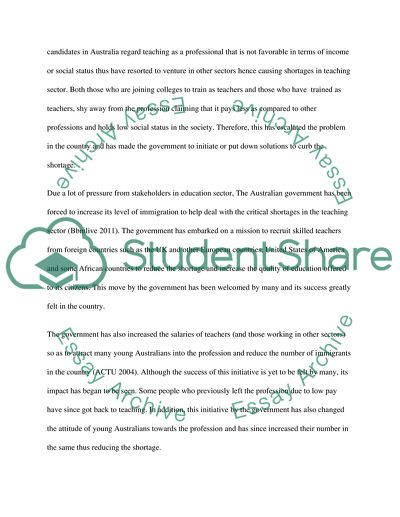 The Australia Government and Trade Unions Policies of Teaching Skills Shortage In recent years, Australian government has experienced shortages in appropriately skilled labor as noted by ABC (2011). The shortages have been experienced in various industries and sectors of the economy thus raising concerns in the country. In education sector, the shortage has emerged as a significant and increasing problem to the country with a number of solutions being put in place to address the problem. These shortages have left most Australian states and territories with a great need for skilled and experienced teachers with those who are qualified in special education and secondary education being in high demand and those having qualifications in early childhood and primary education needed in some states.
Teaching skill shortages in Australia have arisen due to many different reasons including changes in technology and interest or attitude of students towards teaching as a profession itself. Changes in technology have greatly affected the education sector with most of the trained teachers leaving the profession to join other professions hence causing shortages in the sector. Most graduates who have trained as teachers have joined freelance employments such as online academic writing and research writing that are flexible and less restrictive in terms of qualification and experience and also pay well as compared to teaching. New candidates joining the universities have also shied away from the profession as a result of technology.
Although introduction of new technology and changes in the existing ones due to changes in industries in the country have contributed to shortages in teaching skills, changes in attitudes of the students towards teaching have been cited as the main cause of the shortages. Most candidates in Australia regard teaching as a professional that is not favorable in terms of income or social status thus have resorted to venture in other sectors hence causing shortages in teaching sector. Both those who are joining colleges to train as teachers and those who have trained as teachers, shy away from the profession claiming that it pays less as compared to other professions and holds low social status in the society. Therefore, this has escalated the problem in the country and has made the government to initiate or put down solutions to curb the shortage.
Due a lot of pressure from stakeholders in education sector, The Australian government has been forced to increase its level of immigration to help deal with the critical shortages in the teaching sector (Bbmlive 2011). The government has embarked on a mission to recruit skilled teachers from foreign countries such as the UK and other European countries, United States of America and some African countries to reduce the shortage and increase the quality of education offered to its citizens. This move by the government has been welcomed by many and its success greatly felt in the country.
The government has also increased the salaries of teachers (and those working in other sectors) so as to attract many young Australians into the profession and reduce the number of immigrants in the country (ACTU 2004). Although the success of this initiative is yet to be felt by many, its impact has began to be seen. Some people who previously left the profession due to low pay have since got back to teaching. In addition, this initiative by the government has also changed the attitude of young Australians towards the profession and has since increased their number in the same thus reducing the shortage.
References
ABC (2011) Skilled migrants to tackle states skill shortages. http://www.abc.net.au/news/stories/2011/03/23/3171711.htm [Accessed 110 May, 2011]
ACTU (2004) Australia’s looming skills shortage: ACTU Background Paper. http://www.actu.org.au/public/news/files/skill_shortage_paper.pdf [Accessed 110 May, 2011]
Bbmlive (2011) The Great Australian Skills Shortage http://bbmlive.com/visa-information/the-great-australian-skills-shortage.html [Accessed 110 May, 2011] Read More
Share:
Tags
Cite this document
(“The Australia government and trade unions policies of teaching skills Essay - 1”, n.d.)
Retrieved de https://studentshare.org/education/1421302-the-australia-government-and-trade-unions-policies-of-teaching-skills-shortage

“The Australia Government and Trade Unions Policies of Teaching Skills Essay - 1”, n.d. https://studentshare.org/education/1421302-the-australia-government-and-trade-unions-policies-of-teaching-skills-shortage.
Comments (0)
Click to create a comment or rate a document

.... In some countries, the tariff may be excessive, rendering your product uncompetitive” (Bugg, 2005) Some countries may incorporate excess tariffs and duties to the imported products compared to the domestic products in order to encourage the domestic production activities. In such cases it is difficult for the foreign business tycoons to invest in those countries. International trade 7 Do’s and Don’ts while allowing foreign participation Even under the current global financial crisis, the Indian economy has stood out because of the carefully formulated economic policies. Foreign investments and participations were limited to some specific segments alone in India. Most of the profitable public organizations are still under the government...
6 Pages(1500 words)Coursework

Marsupial species including diprotodons and a giant reptile, the Megalania, a goanna species measuring up to 7 meters in length, disappeared within a relatively short time. Australia suffered greater extinction rates than other continents with an estimate of over 85% of all vertebrates over a bodyweight of 40 kilograms becoming extinct (Roberts et al, 2001).
Australian megafauna during the Pleistocene included marsupial mammals, birds, and reptiles, with marsupial herbivores weighing up to 1,500 kilograms. Kangaroo species reached weights of up to 1,000 kilograms and the largest bird, Geyornis newton, weighed an estimated 100 kg (Hiscock, 2008).
The tendency to evolve into larger species (gigantism) is a product of natur...
6 Pages(1500 words)Assignment
sponsored ads
Save Your Time for More Important Things
Let us write or edit the essay on your topic "The Australia government and trade unions policies of teaching skills shortage" with a personal 20% discount.
GRAB THE BEST PAPER

Let us find you another Essay on topic The Australia government and trade unions policies of teaching skills shortage for FREE!