Comments (0)
Add to wishlistDelete from wishlist
Cite this document
Summary
Progress Report General Progress Cristina has settled well into the new class and routines of her class this year. She has responded well to adult support learning and has participated actively in familiar activities for at least fifteen minutes when supported by familiar adult…
Download full paperFile format: .doc, available for editing
HIDE THIS PAPERGRAB THE BEST PAPER96.6% of users find it useful 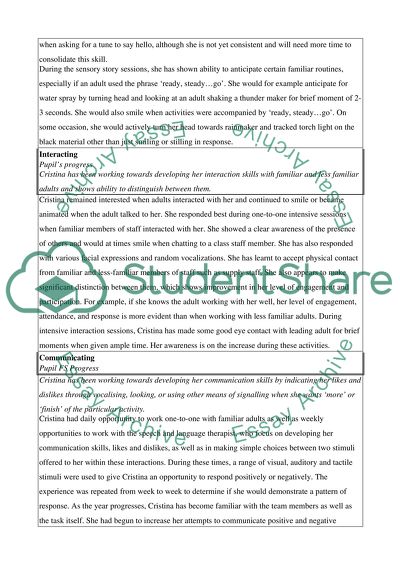 Download file to see previous pages She also shows some anticipation for the next step in activities with familiar routine and is beginning to show ability to communicate a desire for activities to continue. Record of Progress Communication and Language Activities experience by the pupil this year Communication underpins every activity that Cristina undertakes at school. She has participated in a range of activities over this year to provide opportunities for her to develop her communication skills. These activities included greetings, end of the day sessions, massage, sensory story, interactive music, and one-to-one interaction sessions with familiar members of the staff. Responding Pupil’s progress Cristina has been working towards developing anticipation of the next step in well-established routines and responds appropriately or consistently to a range of different sensory stimuli. As the year progresses, Cristina has become more consistent in showing anticipation for regular daily activities such as greetings and her favourite weekly sensory story session titled ‘We going on the bear hunt’. A good example is her excellent progress in anticipating for greeting or interactive sessions during Autumn term. She would look at a bottle of essential oil when presented to her by an adult and stay still for a few seconds to smell the oil of the day. She initially smiled broadly when asked whether she wants more of a smell particularly if given plenty of time to respond. During Spring term, she showed ability to recognize the sequence of steps within same activity. She has also begun exploring the drum positioned under her hands by making small finger movement especially if encouraged verbally by adults to perform a task. Over the time, she has learnt to prolong the activity by trying hard to continue her small hand movement in exploring this musical instrument especially with prolonged one-to-one interaction she gets from an adult at such times. She has also begun to get less startled if adult leading the activity use a countdown such as ‘one, two, three’ when introducing noisy objects, such as drum. Recently, she began to vocalise when asking for a tune to say hello, although she is not yet consistent and will need more time to consolidate this skill. During the sensory story sessions, she has shown ability to anticipate certain familiar routines, especially if an adult used the phrase ‘ready, steady…go’. She would for example anticipate for water spray by turning head and looking at an adult shaking a thunder maker for brief moment of 2-3 seconds. She would also smile when activities were accompanied by ‘ready, steady…go’. On some occasion, she would actively turn her head towards rainmaker and tracked torch light on the black material other than just smiling or stilling in response. Interacting Pupil’s progress Cristina has been working towards developing her interaction skills with familiar and less familiar adults and shows ability to distinguish between them. Cristina remained interested when adults interacted with her and continued to smile or became animated when the adult talked to her. She responded best during one-to-one intensive sessions when familiar members of staff interacted with her. She showed a clear awareness of the presence of others and would at times smile when chatting to a class staff member. She has also responded with various facial expressions and random vocalizations. She has learnt to accept physical contact from familiar and ...Download file to see next pagesRead More
Share:
Tags
Cite this document
(“Progress Report Essay Example | Topics and Well Written Essays - 4500 words”, n.d.)
Progress Report Essay Example | Topics and Well Written Essays - 4500 words. Retrieved from https://studentshare.org/education/1399664-progress-report
(Progress Report Essay Example | Topics and Well Written Essays - 4500 Words)
Progress Report Essay Example | Topics and Well Written Essays - 4500 Words. https://studentshare.org/education/1399664-progress-report.
“Progress Report Essay Example | Topics and Well Written Essays - 4500 Words”, n.d. https://studentshare.org/education/1399664-progress-report.
Comments (0)
Click to create a comment or rate a document

CHECK THESE SAMPLES OF Progress Report

Reflection on Valuable Lessons and Important Aspects of Leadership

Political Economy of Malawi and Its Effects on the Economic Performance

19 Pages(4750 words)Research Paper
sponsored ads
Save Your Time for More Important Things
Let us write or edit the essay on your topic "Progress Report" with a personal 20% discount.
GRAB THE BEST PAPER

Let us find you another Essay on topic Progress Report for FREE!